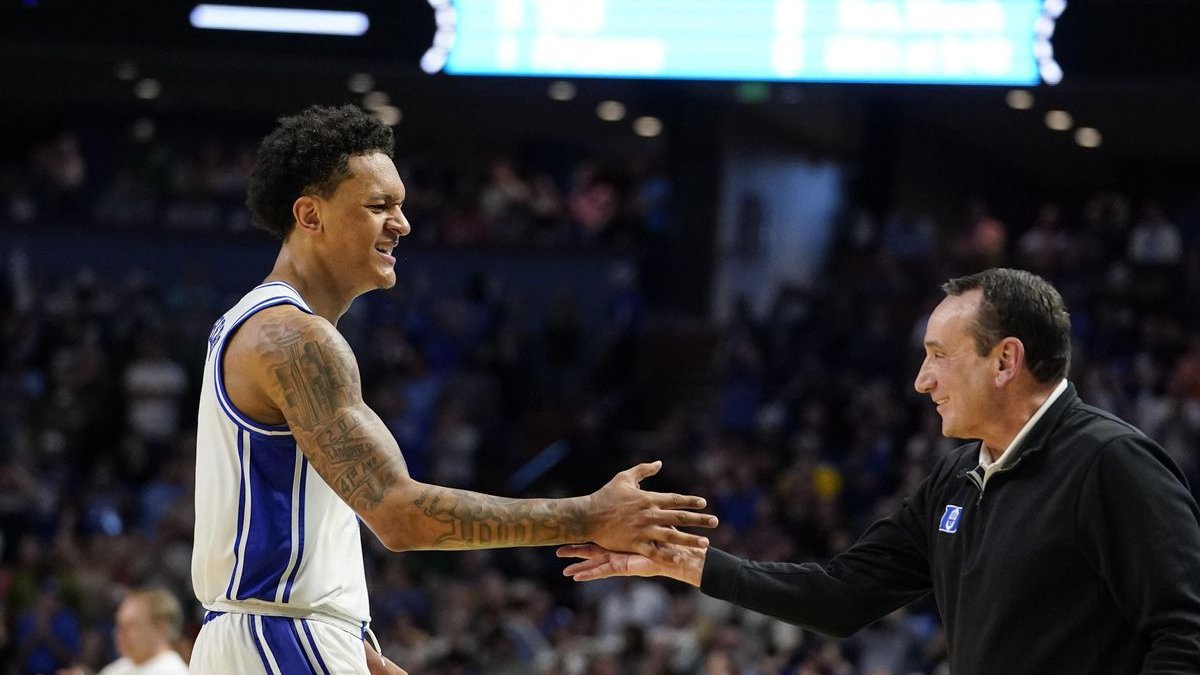 After a late rally to eliminate Michigan State in the second round, Duke’s hopes of sending Coach K out with a national championship is still alive. But they will have to pass an even stiffer test if they want to advance beyond the Sweet 16, as they face Texas Tech in the second West Region semifinal on Thursday.

Michigan State had its issues this season and didn’t finish the season well, but it is no surprise that the Spartans pushed Duke as they did in the last matchup between Coach K and Tom Izzo.

Almost midway through the second half, Duke led 61-54 and was on the way to putting the Spartans away. But Michigan State went on a 16-5 run to take a 70-65 lead with five minutes remaining. But the Blue Devils responded, finishing the game on a 20-6 run to win by nine.

Duke’s underclassmen have had their ups and downs this season, but they stepped up in a major way against Michigan State. Paolo Banchero, Trevor Keels, and Jeremy Roach all had big baskets in the decisive run, with Banchero putting Duke ahead to stay with two minutes left.

After missing the NCAA Tournament last season, Duke is back in a familiar place. For the 26th time in Coach K’s legendary run in Durham, the Blue Devils have reached the Sweet 16. With a win over the Red Raiders, they will advance to the Elite Eight for the 17th time.

After a very uncharacteristic performance in a first-round blowout of Montana State, Texas Tech had to grind out a win over #11 seed Notre Dame in the second round.

Like Duke, the Red Raiders had to rally late to pull out the win. Notre Dame, who downed #6 seed Alabama in the first round, led 52-49 with two minutes remaining. But they managed only one point from there as Texas Tech went on a 10-1 run to end the game.

There has been some movement with the over/under, which has moved from 137.5 to 136.5, with slight adjustments to the spread and moneyline in favor of Duke.

If good defense is what catches your eye, there aren’t many teams that do it as well as Texas Tech.

According to KenPom’s adjusted defensive efficiency rankings, the Red Raiders have the best defense in college basketball. Such metrics are certainly notable and impressive, but the surface numbers back it up.

Defensive Statistics for Texas Tech in the 2021-22 Season

In 36 games this season, Texas Tech has allowed 70+ points only six times, and the most points anyone has scored in regulation against them this season is 75, which Kansas scored in a 94-91 double-overtime win in Lawrence on January 24.

So, in other words, Duke faces a serious challenge in this matchup. The Blue Devils’ schedule this season is not littered with many teams that rank among the better defensive teams in the country. The top defensive team in the ACC according to KenPom is North Carolina, who ranks 42nd, one spot ahead of Duke.

Their toughest challenge of the season to date was against NCAA Tournament favorite Gonzaga, who ranks ninth in KenPom’s defensive efficiency rankings, on November 26. It was a test that they passed, as they won 84-81 to deal the Zags their first loss of the season.

But Duke held a +9 advantage in the turnover department, and they also made 68.2 percent (30 of 44) of their two-point attempts.

Offensive Statistics for Duke in the 2021-22 Season

Playing against Gonzaga and playing against Texas Tech are vastly different, but those areas will be key against the Red Raiders.

The seven-footer came up big against Michigan State in the second round with 15 points, eight boards, and five blocks. That was after he put up 15 points, seven rebounds, five assists, and five blocks in the first round against Cal State Fullerton. In the November win over Gonzaga, Williams was one of the keys to Duke’s win, as he had 17 points, nine rebounds, and six blocks.

The Red Raiders don’t have someone who can match Williams in size, but they are also not a small team. All of their key contributors are at least 6’5”, and their only player under 6’3’’ on their roster is walk-on Ethan Duncan.

The key for Texas Tech will be to get Williams in foul trouble. He has picked up four fouls five times this season, and Duke lost three of those games (beat Gonzaga and Wake Forest, lost to Miami, Virginia, and Virginia Tech).

It will also help Duke’s cause if freshman wing AJ Griffin can have his best game of the NCAA Tournament.

AJ Griffin in the 2022 NCAA Tournament

Griffin is a potential top-five pick in the 2022 NBA Draft, and if he can show why, Duke’s chances of cutting down the nets in New Orleans increase exponentially. Griffin has scored 15+ points only nine times this season, but when he has, Duke has a perfect record.

That Duke, as talented as they are, has not faced too many challenges of this caliber whereas Texas Tech has does tip the scales favorably for the Red Raiders.

The ACC has surprised many by getting three teams into the Sweet 16, but the Big 12, which also has three Sweet 16 participants, was arguably the strongest conference in college basketball this season. And in addition to the opponents that they had to face in conference play, the Red Raiders also played Gonzaga and Tennessee in non-conference play.

But Duke’s last several minutes against Michigan State showed Duke’s mettle, which was certainly in question. That resolve will need to be on display again against Texas Tech, and so will their aforementioned talent.

Look for both to be on display and for Coach K to have at least one more game to coach. Mark Williams will come up huge in another big game, and Griffin is due for a breakout performance. Those two players will make a major impact to set up a potential rematch with Gonzaga with a Final Four berth at stake.

Tonight, the most pivotal game of the 2022 NBA Eastern Conference finals takes place in Boston, with the Miami Heat taking a 2-1 series lead into their matchup with the Celtics. In Game 3 on Saturday, the Heat took control early, outscoring the Celtics 39-18 in the first quarter and leading by as many as END_OF_DOCUMENT_TOKEN_TO_BE_REPLACED