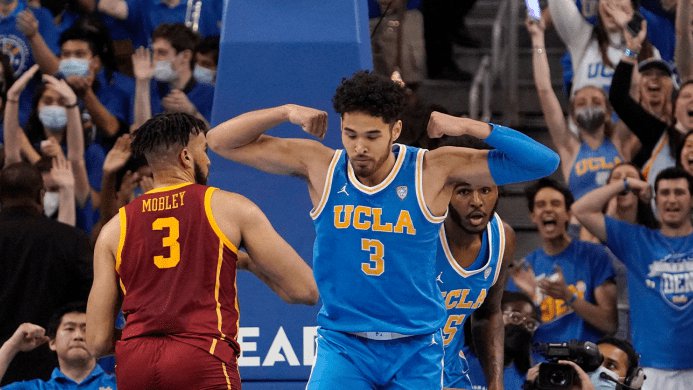 North Carolina and UCLA are two of the most storied programs in college basketball, with 17 national championships and 39 Final Four appearances between them. But Friday’s Sweet 16 matchup in Philadelphia will be a rare March meeting between the two blue bloods.

Only twice before have the Tar Heels and Bruins faced off in the NCAA Tournament. In 1968, they met for the title, with Kareem Abdul-Jabbar, then known as Lew Alcindor, scoring 34 points and pulling down 16 rebounds to lead UCLA to a 78-55 win over North Carolina. It was the second of what would be seven consecutive national championships for the Bruins.

21 years later, the two teams met in the second round of the 1989 NCAA Tournament. In that game, Kevin Madden scored 22 points to lead second-seeded North Carolina to an 88-81 win over seventh-seeded UCLA in a Southeast Region matchup. The Tar Heels lost in the Sweet 16 to #3 seed Michigan, who went on to win the national championship in Seattle.

This year’s East Region semifinal showdown between the eighth-seeded Tar Heels and fourth-seeded Bruins is not the matchup most expected to see.

Baylor, the #1 seed in the region, opened their quest for back-to-back national titles by dominating #16 Norfolk State. But the Bears were bounced in the second round by the North Carolina, who didn’t fold in overtime to pull one of this year’s top March Madness upsets after blowing a 25-point lead in regulation.

UCLA, meanwhile, reached the Sweet 16 for the sixth straight NCAA Tournament appearance and for the second straight year under Mick Cronin.

Which blue blood will book an Elite Eight matchup with the winner of the Saint Peter’s-Purdue game?

Is Everything Falling into Place at the Right Moment for the Tar Heels?

Last season, UCLA entered the season ranked, only to end up in the First Four of the NCAA Tournament, which they entered with a four-game losing streak. There, the Bruins outlasted Michigan State in overtime, kickstarting a run to the Final Four.

While North Carolina won’t have the same path as UCLA (and potentially Michigan this season), things could be similarly coming together for the Tar Heels.

Entering the season, the UNC was ranked in the top 20, only to fall out after consecutive losses to Purdue and Tennessee in November. The Tar Heels returned to the rankings prior to the ACC Tournament after winning at Duke, but they entered the tournament unranked after losing to Virginia Tech in the semifinals in Brooklyn.

But North Carolina opened the NCAA Tournament with a resounding 95-63 win over #8 seed Marquette, then jumped on Baylor. The Tar Heels took a 67-42 lead on a Brady Manke three almost midway through the second half, then things derailed. Manek, who had 26 points in 28 minutes, was ejected with 10:08 left for elbowing Baylor’s Jeremy Sochan, and the Bears came all the way back to force overtime.

That could have been the point where things really fell apart for UNC, but that didn’t happen. Instead, they owned the overtime period, never trailing as they won 93-86 to send the defending champs packing.

There’s no better time than March Madness to get hot, and the Tar Heels have certainly done that, with their top four players all having a big impact.

Leaders for North Carolina in the 2022 NCAA Tournament

Manek is no stranger to the NCAA Tournament. He played in it three times with Oklahoma, though the Sooners never made it past the second round, however.

Manek, who averaged 11.9 PPG and made 235 threes in 123 games with the Sooners, missed out on a fourth appearance as the pandemic caused the cancellation of the 2020 tournament. But due to the pandemic, the NCAA granted an extra year of eligibility that many players have opted to use. Manek used his to move to Chapel Hill and is making the most of his last chance in the Big Dance.

His experience is huge for a team with a first-year head coach in Hubert Davis and two sophomore starters in Davis and Love.

Also huge is the team effort that is happening. Where Davis struggled against Marquette, shooting only 1 of 10 and scoring only four points, Love excelled with 23 points. Love had more turnovers (six) than points (five – which is the number of fouls he had as well) against Baylor and was only 1 of 6 from the field, but Davis had 30 points, five rebounds, and six assists.

While Manek, Davis, and Bacot (15 points, 16 rebounds, four assists, and three blocks) all starred against the Bears, the biggest shot of the game was by freshman Dontrez Styles.

Styles, who entered the game averaging 1.9 PPG and 5.4 minutes per game, scored nine points in 25 minutes against Baylor. On the first possession of overtime, he hit a three, no doubt settling some nerves after the collapse late in regulation.

UCLA hasn’t quite had the season many expected, but the Bruins have still ended up in the Sweet 16. And after surviving against #13 seed Akron in the first round, they were impressive in a 72-56 win over #5 seed Saint Mary’s in the second round.

Is this where we will see the championship-caliber team that they were hyped to be after returning the stars of their surprise Final Four run? One of those stars, Jaime Jaquez Jr., suffered an ankle injury against the Gaels, but the outlook is optimistic for his availability against North Carolina.