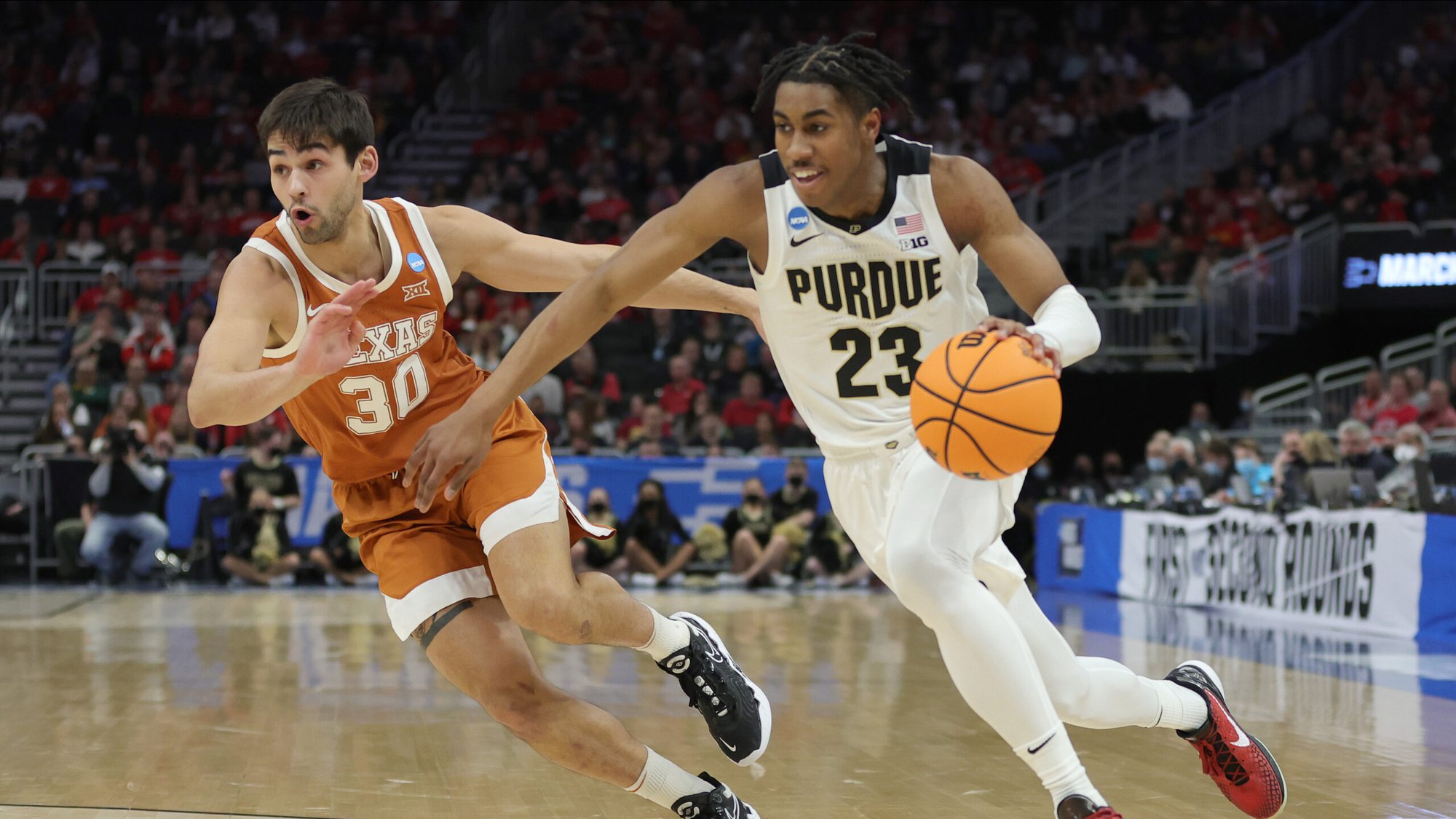 The story of the first week of the 2022 NCAA Tournament was undoubtedly Saint Peter’s, who stunned Kentucky and Murray State to become only the third #15 seed to reach the Sweet 16. But will the Peacocks become the first #15 seed to reach the Elite Eight? A date with Purdue awaits on Friday night in the first East Region semifinal in Philadelphia.

Saint Peter’s showed no fear in their first two games and has had an answer every time a question has been asked of them thus far.

Purdue dispatched #14 seed Yale by 22 in the first round but had a more difficult time against #6 seed Texas in the second round. But the Boilermakers fended off the Longhorns to return to the Sweet 16 a year after being upset in the first round by North Texas.

With Baylor and Kentucky, the top two seeds in the East, already out, #4 seed UCLA–who takes on #8 seed North Carolina in the other East semi–dealing with a hobbled Jaime Jaquez Jr. after an ankle injury against Saint Mary’s on Saturday, Purdue is a -120 favorite (at Caesars Sportsbook) to win the East Region.

Everything is lining up favorably for the Boilermakers to make the Final Four for the first time since 1980, but they would be unwise to underestimate or overlook Saint Peter’s after the Peacocks’ impressive wins over Kentucky and Murray State.

Can Saint Peter’s Pull Another Stunner?

Saint Peter’s is one of four double-digit seeds in the Sweet 16, and they are certainly the most unlikely and unexpected of the quartet. The other three, Iowa State, Miami (FL), and Michigan, are all from power conferences, and though they are here via upset, there isn’t the gulf in talent and prestige between them and the teams that they beat as there is between Saint Peter’s and Kentucky.

But where the Peacocks may not match up in terms of raw talent, they certainly compensate in motivation, determination, and fearlessness. All three of those things came up big as they pulled off one of the biggest March Madness upsets of all time, if not the biggest.

Saint Peter’s didn’t let the win get to their heads either, as they controlled their matchup with Murray State from the outset. The Racers never led in the 70-60 loss, which was only the fourth time this season that they were held to 60 or fewer points.

But can they spring a third straight upset and crush Purdue’s Final Four dreams? If they do, they would do what Florida Gulf Coast (2013) and Oral Roberts didn’t do. And what no other #13 or #14 seed has either.

Purdue certainly has a lot more pressure to deal with than Saint Peter’s, given their Final Four drought, how the region has opened up for them, and the Big Ten’s struggles in this year’s NCAA Tournament outside of themselves and Michigan.

And we haven’t seen Purdue’s best just yet either. We’ve seen pretty good, and there have even been stretches of great. But their best? Not yet.

The Boilermakers are one of the top three-point shooting teams in college basketball, ranking fourth in the country at 38.8 percent. They also rank seventh in overall field goal percentage, shooting 49.2 percent from the field. But they were below those numbers in their wins over Yale and Texas.

Shooting Percentages for Purdue vs. Yale and Texas

Shooting 79 free throws in two games–and making them at a higher clip than you do for the season–certainly helps make up for the above. For the season, Purdue is shooting only 70.8 percent from the stripe, but they made 60 of their attempts against Yale and Texas, which comes out to almost 76 percent.

That said, they need shots to fall more if they wish to continue their run, end their Final Four drought, and win the program’s first NCAA Tournament title. Most notably, Sasha Stefanovic needs to find his form, wherever it is. Stefanovic, who is shooting 37.8 percent from three for the season, is only 5 of 26 (19.2 percent) from three over his past five games.

But Purdue is getting production from areas it needs to. Jaden Ivey is averaging 19.8 PPG over his past five games and went for 22 against Yale and 18 against Texas. And Trevion Williams and Zach Edey combined for 33 points and 17 rebounds against the Longhorns, which is well above their combined averages for the season.

After beating Kentucky and Murray State, Saint Peter’s isn’t sneaking up on Purdue. And if the Boilermakers, for some inexplicable reason, get caught thinking they can just coast past the Peacocks with minimal effort, well, that would be on them.

However, it is safe to assume that won’t be the case, knowing what is at stake for Purdue. If they don’t make the Final Four this year with the talent that they have and a favorable bracket, when will they make it?

That is a lot of pressure to contend with, to be sure. But it also means that they should be ready to play from the tip and won’t let up until the win is wrapped up. Look for Purdue to comfortably win and advance to face the winner of the North Carolina-UCLA game for the East Region title on Sunday.