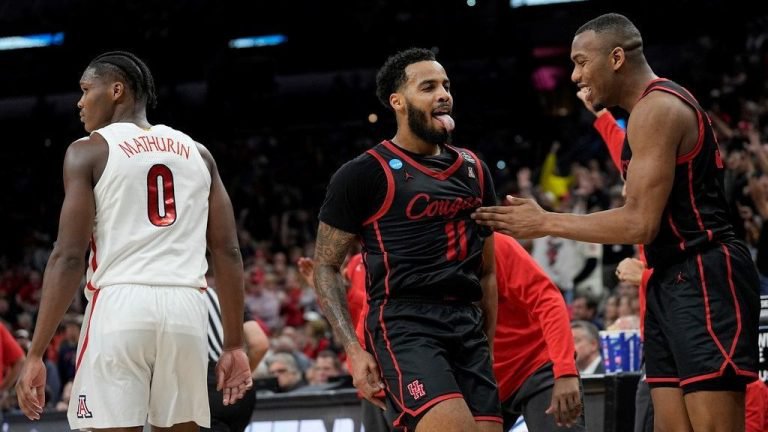 South Region #1 seed Arizona entered the 2022 NCAA Tournament with high hopes of reaching the Final Four for the first time since 2001. But the Wildcats will instead have to wait until next year to try to end that drought.

Houston, the #5 seed in the South, faced a tall task to follow up last season’s Final Four run with another deep March Madness run after losing two of their best players in December. But the Cougars are a win away from a second straight Final Four appearance after taking out Arizona on Thursday night in the Sweet 16.

In Saturday’s regional final, they will have the chance to eliminate another group of Wildcats, as they will face #2 seed Villanova in the Elite Eight. Villanova comfortably saw off #11 seed Michigan’s upset bid to advance to the Elite Eight for the first time since 2018, when they won their second national championship in three seasons.

Here’s how South Region odds look with only the regional final remaining.

Pre-tournament odds are via FanDuel Sportsbook as of Thursday, March 17, 2022. Teams in bold are still in the tournament after Saturday’s second round games.

Current Odds to Win the South Region (as of Friday, March 25)

2022 NCAA Tournament South Region Predictions: Who Will Win the Region?

The South Region is an extremely interesting region, given the non-conference matchups that occurred between several teams earlier this season.

Do any of those results tell us anything? Not as much as if the matchups occurred later in the season and not in November or December.

Speaking of non-conference results, Villanova could not have looked any worse when they were blown away by Baylor in a 57-36 loss in December. Then that loss was followed by a 20-point loss at Creighton in their Big East opener.

But little has gone wrong for the Wildcats since those two losses, as they have gone 19-3, with two losses to Marquette and a narrow loss at UConn. Since that loss to the Huskies, Villanova has won five straight ahead of the NCAA Tournament, including wins over St. John’s, UConn, and Creighton to win the Big East Tournament.

Villanova has also played a challenging schedule. In addition to their non-conference games against Tennessee and Baylor, the Wildcats played UCLA (lost in OT) and Purdue (lost by six). And though there were a few disappointing Big East teams this season, the conference received six NCAA Tournament bids.

Villanova’s overall strength of schedule ranked 12th, while their non-conference schedule ranked 16th. The latter number is third among teams in the NCAA Tournament field, behind Texas Southern (ninth) and Alabama (11th).

Speaking of rankings, here is how the Wildcats shape up in several notable categories:

Rankings and Ratings for Villanova in the 2021-22 Season

Villanova also carries a wealth of experience. Of their six main contributors, the only underclassman is sophomore forward Eric Dixon. And both Collin Gillespie, the team’s leading scorer, and Jermaine Samuels, the team’s third-leading scorer and second-leading rebounder, were a part of Villanova’s national championship-winning team in 2018.

It also doesn’t hurt to have a Hall of Fame coach in Jay Wright either.

Arizona, Tennessee, Illinois, and even Houston, who has overcome season-ending injuries to guards Marcus Sasser and Tramon Mark to continue its run of success in the AAC, all have an argument for why they could or should win the region. Even Michigan does, as the Wolverines have the talent to compete and win. And if Colorado State gets past Michigan, the Rams can’t be discounted either.

But in the end, it’s impossible to overlook all that Villanova brings to the table.

Well, seeing as how I picked Michigan to beat Villanova in the Sweet 16, I couldn’t possibly stick with Villanova to win the region, right? I like chaos, and I like the hot hand.

Last year, Michigan was on the receiving end of an Elite Eight upset by a #11 seed, as UCLA ended their season earlier than planned. This time around, the Wolverines will be on the giving end, as they will send Villanova packing and follow it up with a win in Saturday’s regional final.

Tennessee enters the NCAA Tournament as hot as anyone out there. The Vols, who won the SEC Tournament (and crushed the bid hopes of surprise finalist Texas A&M as a result), are 15-2 in their past 17 games and enter the Big Dance with seven straight wins.

But when push comes to shove, this is still a Rick Barnes team. Barnes has led four schools–Providence, Clemson, Texas, and Tennessee–to a combined 25 NCAA Tournament appearances over the course of his career. And in those 25 appearances, his teams have made the second weekend only seven times.

This will be his fourth straight tournament appearance with Tennessee. Here’s how the previous three went:

After landing only a #3 seed despite their resume, Tennessee might come in with a little extra motivation. That can’t be discounted. But we have been fooled by Tennessee and by Rick Barnes before, and that history makes the winner of the Michigan-Colorado State matchup a low-risk, high-reward option worth backing to reach the second weekend.

Result: If Colorado State had advanced, they would have done the same thing to Tennessee that Michigan did. Do I have no faith in a Rick Barnes-coached team to fulfill lofty NCAA Tournament expectations? Well…

2022 NCAA Tournament South Region Early Upset Pick: Tennessee to be bounced in the second round

Chattanooga over Illinois is a popular March Madness upset pick, but I actually like the Fighting Illini to make it through that matchup. And other options like Loyola-Chicago over Ohio State or Michigan over Colorado State wouldn’t really register as upsets. UAB could certainly challenge Houston if Jordan “Jelly” Walker catches fire, but as with Illinois, I look for the Cougars to come out on top.

So, the focus is instead on the second round, where, as mentioned above, I love the value in backing the Michigan-Colorado State winner to reach the Sweet Sixteen.

Michigan has been pretty underwhelming and inconsistent after entering the season with Final Four hype. But the Wolverines are not short on talent, even if they have to be without point guard DeVante’ Jones (concussion).

If David Roddy and Colorado State advance, they will be a tough out as well. After having to deal with San Diego State and Boise State, two of the top defensive teams in college basketball, and others in the Mountain West, the Rams will be able to hold their own against Tennessee.

Result: I’m not always right (see South Dakota State-Providence and backing Iowa to make a deep tournament run), but I was right here.