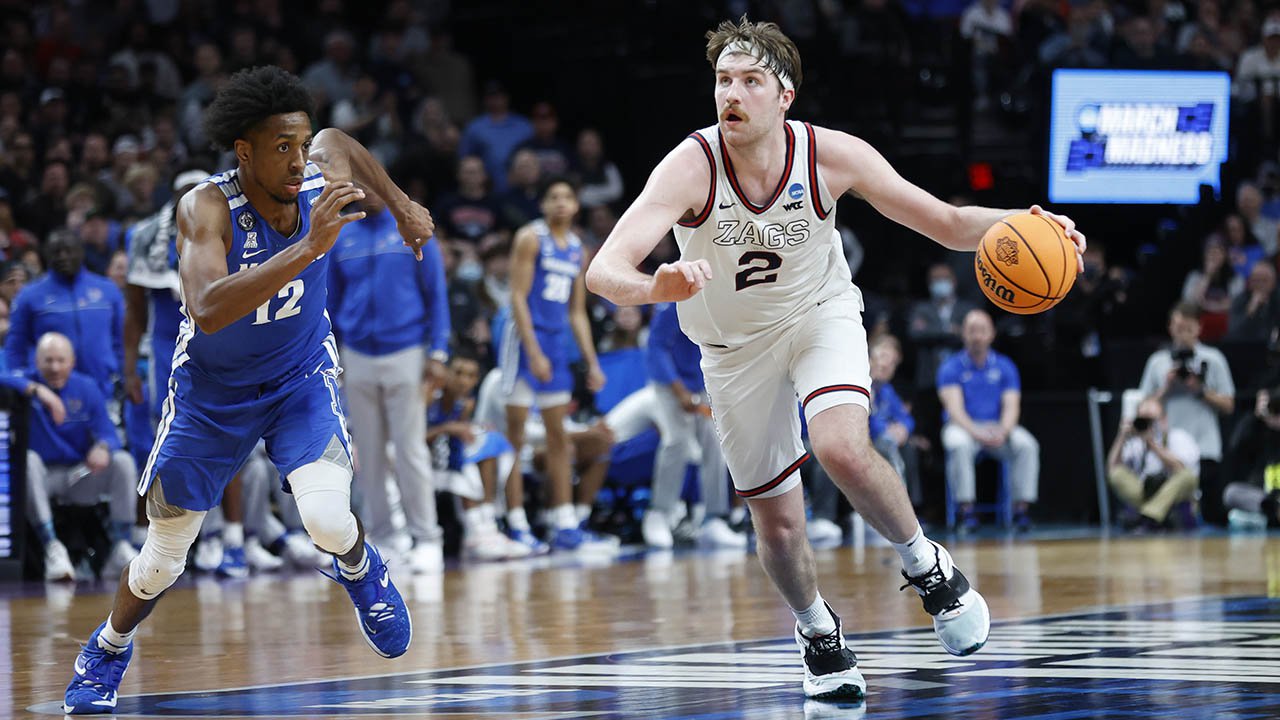 Gonzaga has not been dominant in its first two games of the 2022 NCAA Tournament, but the tournament’s top seed is four wins from a title. However, they will need to put in a better 40-minute performance if they want to avoid trouble against West Region foe Arkansas in their Sweet 16 showdown in San Francisco.

Gonzaga Wakes Up in Second Half to See Off Georgia State, Memphis

The Zags did not wake up in their opening matchup against Georgia State until almost midway through the second half, but when they woke up, they flexed their muscles to put away the Panthers by 21 points.

It was much more of a test in the second round against Memphis, who held a double-digit lead at halftime. It was a rare spot for the Bulldogs to be in, but they dug in and rallied to see off the Tigers’ upset bid.

Gonzaga is in the Sweet 16 for the seventh straight time, which is the longest active streak in the country. With a win over Arkansas, they will reach the Elite Eight for the third straight time and fifth time in the last seven editions of the NCAA Tournament.

Arkansas, the #4 seed in the West Region, has had to see off two inspired performances by double-digit seeds to reach the Sweet 16 for the second straight year. In the first round, they edged Vermont 75-71, led by Stanley Umude’s 21 points and nine rebounds.

In the second round, they faced #12 seed New Mexico State, who upset #5 seed UConn in the first round. Behind a strong defensive effort, the Aggies kept up with the Hogs and even led by one with eight minutes left. But Arkansas went on a 9-0 run to take control and held on from there in a 53-48 win.

In both games, free-throw shooting was key for the Razorbacks. Against Vermont, they made 20 of 25 from the stripe, including four in a row in the final minute to keep the game out of the Catamounts’ reach. And against New Mexico State, they went 22 for 25, including 7 of 8 in the final minute, to close out the Aggies.

We haven’t seen the best that either of these teams has to offer over 40 minutes yet. Will Arkansas be able to keep up with Gonzaga if that happens on Thursday?

Arkansas vs. Gonzaga Sweet 16 Spread and Over/Under Betting Odds (as of Thursday, March 24)

There has been movement since this piece was initially published, with Gonzaga moving from -9 to -10 and the over/under moving from 154 to 154.5.

Since receiving only three bids in the 2016 tournament, with only one team reaching the Sweet 16, the conference had multiple teams in the Sweet 16 each of the past four tournaments. And with six teams in the NCAA Tournament, including four with high seeds–Auburn (#2 in the Midwest), Kentucky (#2 in the East), Tennessee (#3 in the South), and Arkansas–it looked like that March Madness streak would continue.

But here we are after the first weekend, and only Arkansas remains in the Big Dance. They were the last SEC team standing in last year’s tournament as well, when they advanced to the Elite Eight as the #3 seed in the South Region. There, they lost to eventual national champion Baylor by nine, which was the closest game the Bears had all tournament.

This season, the Razorbacks started 8-0 before stumbling in December and early January, losing five of six and starting SEC play 0-3.

Since then, however, Arkansas is a scorching 17-3 and recorded wins over Auburn, Kentucky, and Tennessee along the way.

Their best is pretty darn good, especially when they are putting points on the board.

Arkansas When Scoring 70+ Points vs. Scoring Below 70 Points

Obviously, they can still win when they aren’t scoring, as their win over New Mexico State showed. However, it is important to note the opposition in those five wins: LSU (a team that was held under 70 points 16 times this season) Ole Miss (13th in the SEC in scoring at 68.1 PPG), Mississippi State (a team that routinely forgot how to score this season, which is why they now have a new coach), Tennessee (who had the worst shooting percentage among the SEC’s top teams), and New Mexico State.

If Arkansas is to reach the Elite Eight for the second straight year, they have to score, because slowing down the highest scoring team in college basketball is asking a bit much.

And that is a major question mark at this point for the Razorbacks. Their success from the foul line has saved them in both games thus far, as their shooting from the field has not been all that great.

Shooting Percentages for Arkansas vs. Vermont and New Mexico State

It’s safe to assume–I would think–that Arkansas will not shoot 27.5 percent from the field again anytime soon. But they will almost certainly need to better their season averages against Gonzaga to win.

The Razorbacks rank fourth in the SEC in scoring this season (76.2 PPG), but they don’t shoot the ball particularly well. They are middle of the pack in field goal percentage (43.5 percent) and 11th in three-point shooting (30.5 percent).

Arkansas is averaging 76.2 PPG, but a part of that can be attributed to leading Division I in free throws made per game (17.5). The only other team averaging at least 17 made foul shots per game is New Orleans, who made 17.4 free throws per game this season.

For late-game free throws to be meaningful like they were against Vermont and New Mexico State, they will need to do many things. But chiefly among that list is being more productive for the previous 35+ minutes than they have been in a number of games.

But even if we see Eric Musselman’s s squad suddenly remember how to shoot again, will that be enough to help lead them past Gonzaga?

The 2022 French Open is underway at Stade Roland Garros in Paris, France, and we are already almost through the first week of play. Tomorrow, the remaining third-round matches will take place, after which the men’s and women’s singles draws will be down to their final 16 contenders. In both men’s and women’s singles, there END_OF_DOCUMENT_TOKEN_TO_BE_REPLACED