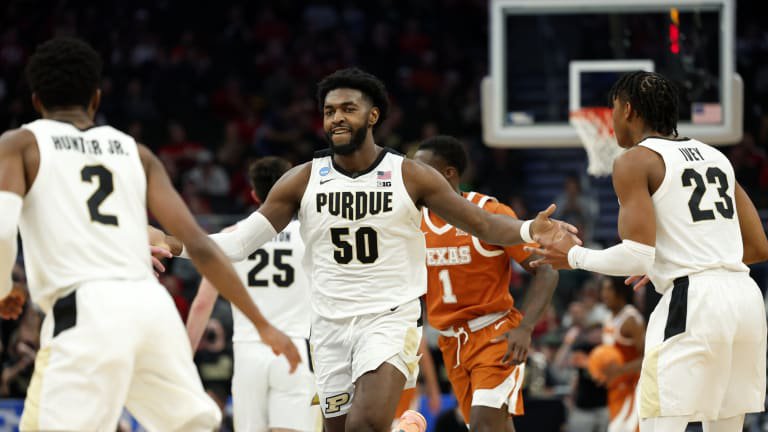 Last season, Baylor crushed Gonzaga’s dreams in Indianapolis to win the program’s first national championship in the Bears’ first Final Four appearance since 1950. And despite significant roster turnover, the champs entered the 2022 NCAA Tournament primed for a run at a repeat.

But repeating isn’t easy, and the Bears went down in the second round to North Carolina.

Fortunately for the Bears, they had some company in the March Madness upsets boat. In one of the biggest upsets in NCAA Tournament history, #15 Saint Peter’s knocked out #2 seed Kentucky in the first round.

With the top two seeds out, #3 seed Purdue is favored to cut down the nets in Philadelphia, with #4 seed UCLA, #8 seed North Carolina, and the 15th-seeded Peacocks hoping to keep the Boilermakers from reaching their first Final Four since 1980.

Purdue may not get another opportunity like this for a while, which is certainly a lot to think about. But the Boilermakers are the best team remaining in the East Region and falling short will be a major disappointment for the team, fans, and bettors.

Here’s a look at the odds to win the East.

Odds to Win the East Region of the 2022 NCAA Tournament

Pre-tournament odds are via FanDuel Sportsbook as of Thursday, March 17, 2022. Teams in bold are still alive in the tournament.

East Region Odds Prior to the NCAA Tournament

Current Odds to Win the East Region (as of Friday, March 25)

#15 Saint Peter’s is still not listed at FanDuel after their upset wins over Kentucky and Murray State, but the Peacocks are +3000 at Caesars Sportsbook.

2022 NCAA Tournament East Region Predictions: Who Will Win the Region?

The Purdue bandwagon might have lost a number of passengers with the stretch run that the Boilermakers may have had, which is understandable.

After scoring 80+ points in six straight games across late January and early February, Purdue heads into the NCAA Tournament having hit the 75-point mark only twice in their past ten games.

Have the Boilermakers been figured out? Is another talented, promising Purdue team going to fall short of the Final Four yet again?

Purdue hasn’t made the Final Four since 1980, losing in the Elite Eight in 1994, 2000, and 2019. Their March Madness history over the past four-plus decades has been littered with crushing loss after crushing loss with a high seed or a favorable situation, from six losses in the second round as a #1, #2, or #3 seed, to the Elite Eight loss to #8 seed Wisconsin in 2000, to the OT loss to Virginia in the Elite Eight three years ago, to last year’s first-round exit at the hands of #13 seed North Texas in overtime.

And last, but certainly not least, there was 1994. The Boilermakers, led by Player of the Year Glenn Robinson, who would be drafted first overall in the 1994 NBA Draft after a legendary sophomore season, fell to Duke in the Elite Eight as the top seed in their region.

But at some point, the suffering has to end. And if there is ever a time for that to happen, it is this year.

This is a team with 13 wins over teams that made the field of 68, so they have been tested plenty throughout the season. And though this year’s team is certainly at its best when its best player, Jaden Ivey, is at the top of his game, this team has such high potential because it has a star like Ivey that can take over a game and is equipped to beat you with a variety of sources whether or not Ivey is on.

Three years ago, the Boilermakers made it to the Elite Eight on the back of the Carsen Edwards show. Edwards averaged 34.8 PPG and recorded 91 field goal attempts (61 from three) and 36 free-throw attempts in four NCAA Tournament games. That will not need to be the case this time around.

The stretch run has not been stellar, but the bright lights of the Big Dance will bring out the best in the Boilermakers.

Picking Purdue wasn’t based on the expectation that either Baylor or Kentucky would be eliminated at this point, but that certainly helps here. The Boilermakers are now the top seed left in the region, and anything short of a trip to New Orleans would be a disaster.

If you are not confident enough to beat out Baylor to win the region, this is a high-value option to opt for instead.

A potential Purdue-Kentucky matchup in the Sweet Sixteen could be one of the most interesting and memorable games of March Madness. The Wildcats, led by Wooden Award favorite Oscar Tshiebwe, are certainly a formidable foe.

But while Kentucky did register two of the season’s most impressive wins–an 18-point win at Kansas and a 28-point home win over Tennessee in which they lit up the Vols for 107 points–they enter the NCAA Tournament with a 3-6 mark against ranked teams this season.

Purdue, on the other hand, is 5-3 this season against ranked teams. I like the Boilermakers to be able to come out on top in that matchup, even if Tshiebwe does what he has done against most teams this season.

Indiana went into the Big Ten Tournament with seven losses in nine games and seemingly bound for the NIT. But the Hoosiers beat Michigan and Illinois before falling to Iowa in the semifinals to book their place in the Big Dance. Then on Tuesday night, they saw off Wyoming’s challenge in the First Four to advance to a first-round showdown with the Gaels.

So, the Hoosiers are on the right track at the right time. Saint Mary’s can be a tough matchup for just about anyone, but especially so for a team that has had issues getting consistent offense from sources not named Trayce Jackson-Davis.

But Xavier Johnson is averaging 17.2 PPG over his last nine games, and after a stretch in which he had one 20+ point performance in 13 games, Jackson-Davis has scored 24, 21, 31, and 29 points in his last four games. Against Wyoming, he went 10 of 16 from the field and 9 of 11 from the free-throw line, and he had nine boards as well.

Indiana should certainly be approached with caution, but they are worth backing to move on to the second round.

Result: Well, this one was off by just a bit. Let’s just leave it at that.