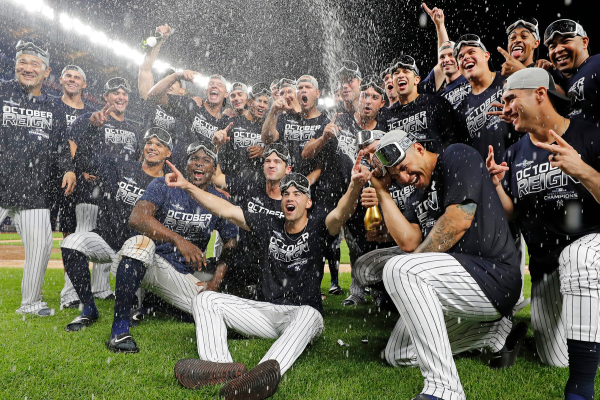 With a 9-1 thrashing of the Los Angeles Angels on Thursday, the New York Yankees claimed the American League East title for the first time since 2012. However, a night reserved for celebration upon earning a playoff berth was marred by news that the Yankees could be playing postseason baseball without the team’s winningest pitcher, Domingo German.

With just eight games remaining in the season, the Yankees and their 9.5-game lead over the Rays in the AL East is good enough to make them champions of the division. New York is the second team in the American League to clinch a playoff spot, behind only Houston.

While smiles surrounded the New York clubhouse, the clinching win came just hours after the team received news that makes German’s status for the playoffs uncertain.

So, as the Yankees prepare to face off against Minnesota or the winner of the Wild Card on Oct. 4, what will the team look like?

While the Yankees will be used to shuffling players around after completing a season in which a record 30 players have been placed on the injured list at some point, the potential loss of German right before the postseason could be crippling.

Just before Thursday’s game, New York received news that German has been placed on administrative leave under the joint MLB-MLBPA domestic violence policy after the league was made aware of a situation involving the Yankees starter on Tuesday.

While details of the situation remain unclear, the only thing set in stone right now is that the administrative leave will keep German away from the team for at least seven days. An investigation into the incident is underway, and it’s likely that a suspension could be handed down before New York gets to Oct. 4.

On the season, German is 18-4 with an ERA of 4.03. On top of having the most wins on the Yankees rotation, the right-hander has 153 strikeouts while holding opponents to a .228 batting average.

For now, manager Aaron Boone has said the team will go forward expecting to be without German as postseason baseball gets underway.

With the possibility that German will miss time, New York will be looking for any good news. There is some. While German may be out, both slugger Giancarlo Stanton and pitcher Luis Severino have returned.

Severino’s presence could be particularly useful if German leaves a hole in the pitching staff come playoff time.

Is a Yankees World Series Possible?

With 5/1 odds to win the World Series, the Yankees trail two heavyweights as October baseball looms.

First, New York trails the 9/4 odds of the Los Angeles Dodgers (98-55) from the National League.

However, the more challenging competition could come out of the American League, where the Astros also hold 9/4 odds of winning the World Series.

If the AL comes down to a Yankees-Astros matchup, we’ll get to see if a powerful Yankees lineup will be enough to overcome a well-rounded team offering one of the scariest postseason rotations in recent memory.

While the Yankees lead all clubs with 905 runs scored on the season and trail only Minnesota in the home run department with 292, the loss of German would mean the loss of a surefire playoff starter on a staff that isn’t one of the best or deepest.

In a New York-Houston AL Championship series, the Astros would have the advantage on the mound in every game, especially without German on the field.