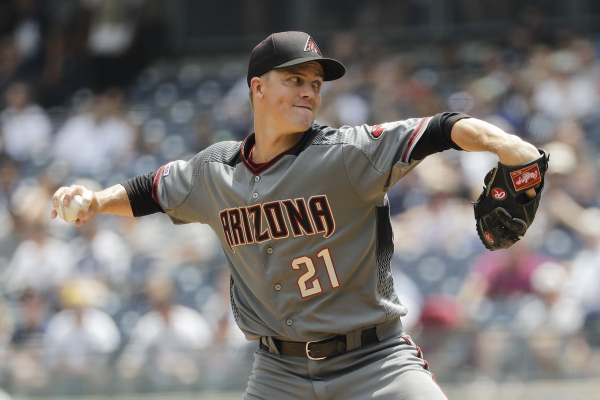 There were roughly five minutes remaining before the MLB trade deadline on Wednesday when a deal sending Arizona starter Zack Greinke to the Astros became official. In exchange for the dominant right-hander, the Diamondbacks received four prospects from Houston.

Looking for their second World Series title in three years, the Astros were aggressive at the deadline, and that aggressiveness paid off as the AL West-leading club now has arguably the most fearsome rotation of any playoff team.

The Rich Astros Rotation Gets Richer

Before acquiring Greinke, Astros starters already owned the top rank in the majors for opponents’ batting average at .213, and strikeouts per nine innings at 10.5. Additionally, Houston’s starters have been able to claim the fourth-best ERA in baseball with a 2.73.

Individually, Verlander’s 14 wins lead the American League while Cole’s 212 strikeouts are the most in baseball.

Before the Greinke trade, the Astros were the second favorite to win the American League at +200 odds. The 68-39 Yankees were the only team with better odds at +140.

Now, with the trade deadline a thing of the past, the Astros are favorites to win the AL with +135 odds, moving ahead of New York. That new reality is especially frustrating for fans of the Yankees, who had to watch their club bypass the trade deadline without making a big splash.

The rest of the American League is now racing to keep up with Houston, but the impact of the Greinke deal wasn’t restricted to the AL. Moving ahead of the Dodgers, who currently sit at +300 odds to win the World Series, the Astros are now the favorite to win it all at +200.

The Yankees are the big losers in this category as well. New York went from +450 odds to win the World Series on July 30 to their current odds of +600.

Are the Astros a Good Bet?

It shouldn’t come as a surprise that Houston is now the odds-on favorite to win the World Series. With an eight-game lead on the Athletics in the AL West, the Astros look destined for the playoffs once again.

And once in the playoffs, where rotations are tightened to just three or four pitchers, the combination of Greinke, Verlander, and Cole appears to be the best on paper.

The rotation looks great for Houston, but there’s still plenty of competition that makes the payoff on a winning Astros bet lack appeal. In the American League, the Yankees have a daunting lineup while the Twins can’t stop hitting home runs; they lead the league in homers by a wide margin with 209.

The Dodgers are also ahead of the Astros when it comes to the long ball, and they’re one of three clubs with a better overall ERA than Houston (the Dodgers lead baseball with a 3.39).

As more public money floods in on the Astros, look to see whether or not their odds improve further. If not, the sharps are likely putting their money elsewhere based on their projected World Series winner or value alone.