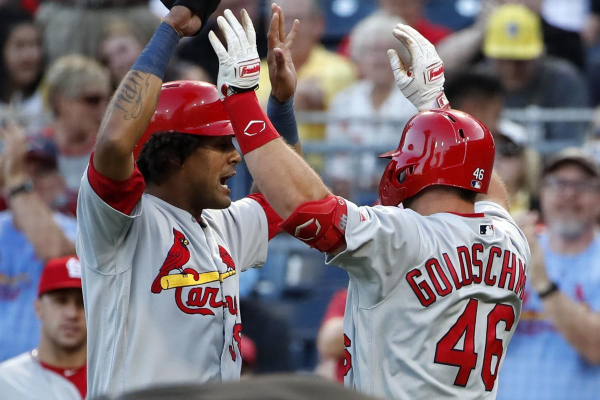 Tuesday features a matchup of National League Central versus National League West as the St. Louis Cardinals take on the Los Angeles Dodgers at Dodger Stadium.  This is the second of a three-game series, one that saw the Dodgers win the opener.

For the Cardinals, they are currently sitting 2.5 games behind the Chicago Cubs for first in the NL Central, while the Dodgers have had the NL West locked up seemingly for months now.  The pitching matchup for this one features Miles Mikolas (7-11, 4.00 ERA) going for the Cardinals against the Dodgers’ Clayton Kershaw (10-2, 2.85 ERA).   First pitch is scheduled for 10:10 pm ET for this one.

The moneyline for this one currently sits at the St. Louis Cardinals +170 and the Los Angeles Dodgers -200.   The over/under for runs scored sits at 8.5.

On the offensive side, the Dodgers have certainly had the more potent offense this year.  They currently rank fourth in the majors, averaging 5.44 runs per game (5.43 at home).  For the Cardinals, they fall to 21st in the majors at 4.51 runs per game (4.68 on the road).

On the pitching side, the Dodgers once again sit on top, both figuratively and literally.  They currently are the top-ranked team in earned run average with a staff ERA of 3.42 (2.72 at home).  For the Cardinals, they come in at a respectable ninth with a 4.08 ERA (4.84 on the road).

While the Cardinals sit within striking distance of the Chicago Cubs, they need to be careful not to see that slim margin grow larger. To do so, they will turn to righty Miles Mikolas on Tuesday.  On the season, Mikolas is 7-11 in 22 starts with a 4.00 ERA, 1.22 WHIP and opponents are hitting .274 against the righty.  In 126 innings, he has allowed 133 hits, 56 earned runs, 17 home runs and has struck out 90 versus 21 walks.  In his last outing, a 2-0 loss to the Cubs, Mikolas went 5 2/3 innings, allowing one unearned run, six hits, and a walk while striking out three. He will look to try to stifle a potent Dodgers offense on Tuesday.

On the offensive side, Paul Goldschmidt has performed well of late.  Despite getting off to a slow start, he has finally started looking like the perennial MVP award candidate in the last month, hitting .282/.326/.647 with nine home runs, 21 runs batted in and 18 runs scored over the last 30 days. He has also had success against Kershaw, hitting .294 with two home runs in 34 at-bats.

Unfortunately, he hasn’t had a lot of production around him.  The Cardinals have been hoping that Matt Carpenter can turn it around, but he has struggled to get it going all season. In 298 at-bats, the third baseman is hitting a paltry .215/.319/.369 with 10 home runs, 29 runs batted in, and 43 runs scored.

Los Angeles has been head and shoulders above the rest of the National League this year.  In fact, they currently sit with the best record in all of the big leagues, although teams like Houston are hot on their heels.  Still, the Dodgers have been dominant and will look to one of the best to add another win on Tuesday in southpaw Clayton Kershaw.

Interestingly, a fifth of those walks came in his last start.  In an 8-2 win over the Padres, Kershaw went six innings, allowing six hits, five walks, and two earned runs while striking out five.  Still, despite the walks, he minimized the damage to pick up the win.

On the offensive side, Cody Bellinger continues to just demolish baseballs this season.  Thus far, he is hitting .326/.375/.672 with 37 home runs, 88 runs batted in and 90 runs scored.  In fact, he leads the team in all three of those last statistical categories.  In Monday’s win, he hit a three-run home run in the first, giving the Dodgers a lead they would never relinquish.  Throw in players like Justin Turner, Max Muncy, Joc Pederson, Corey Seager, and others, and this is a lineup that is unrelenting throughout.

While the Cardinals have played well at times, the Dodgers have played well all season, especially at home.  When playing in Dodger Stadium, LA is a whopping 44-15. Additionally, on the road, the Cardinals sit at just 27-30.  Throw on top of that the fact that Kershaw has been filthy at home this year, going 7-0 with a 2.35 ERA.  Taking everything into account, it is hard to take the Cardinals, no matter how enticing the moneyline might be.  For my money, I am taking the Dodgers at -200.