Padres vs. Mets (July 24): San Diego Goes for Sweep With Musgrove on the Hill 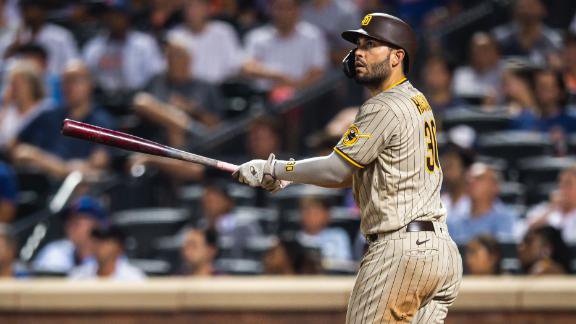 The final game of the three game series between the San Diego Padres and New York Mets takes place on Sunday. The Padres have won the first two games of the series and aim for a sweep.

The Mets have lost three straight, and their lead in the NL East has shrunk to just half a game. The Padres still sit 10.5 games behind the Dodgers in the division, but their two straight wins coming out of the all-star break have them feeling confident.

In the first two games of the series, the Padres have held the Mets to 1 run each time, and their starting pitching has been excellent. Yu Darvish and Blake Snell combined for 12 innings, allowing only 1 run and 8 hits.

The Mets have a slight edge in the odds for Sunday Night Baseball on ESPN. Even with San Diego’s dominance in the series thus far, the Mets send one of their best pitchers to the mound. San Diego will counter with Joe Musgrove.

Expect the Under to Hit Again

The total runs scored has gone under in each of the first two games of the series. I would expect this total to look very similar again on Sunday night. Both pitchers are having great seasons, and the offenses for both teams have been slumping.

For the Padres, Joe Musgrove started off the season on an absolute tear. He started the season 8-0 and went at least 6 innings in every outing. He is still on a great pace, even if the wins aren’t finding him.

Musgrove only has one outing where he lasted less than 6 innings. That was the last start he had before the All-Star break, where he went 5 innings and gave up 5 runs. He still holds a fantastic 2.42 ERA, and if he can get som run support from the offense, he will be back to his winning ways in no time.

For the Mets, Carlos Carrasco won his last time out against the Cubs on July 14th. He went 6 innings, allowing no runs and only 5 hits. With a 10-4 record, he holds the best record on the team.

Carrasco has been roughed up in a few starts, which explains the ERA north of 4.00. However, the team has done a fantastic job of putting up runs to counter the punches and avoid losses.

On Sunday, it will be a battle of starters who have had success in their own ways. The runs should be at a premium when both of these hurlers are at their best.

Joe Musgrove should be able to notch his 9th win of the season tonight. He will have to last 6+ innings, and the offense will have to pick up where it left off in the first two games.

The Padres have held thee Mets to 1 run in each game so far, so the struggle is real for New York, and it will be a steep hill to climb when having to face one of the early season Cy Young favorites.

Expect the Under to hit as it provides great value. 8 runs will be a lot to ask when these pitchers are on their A-Game. With both teams in the playoff hunt, you have to ask yourself – Which team wants it more?

Other MLB Articles on Betting News