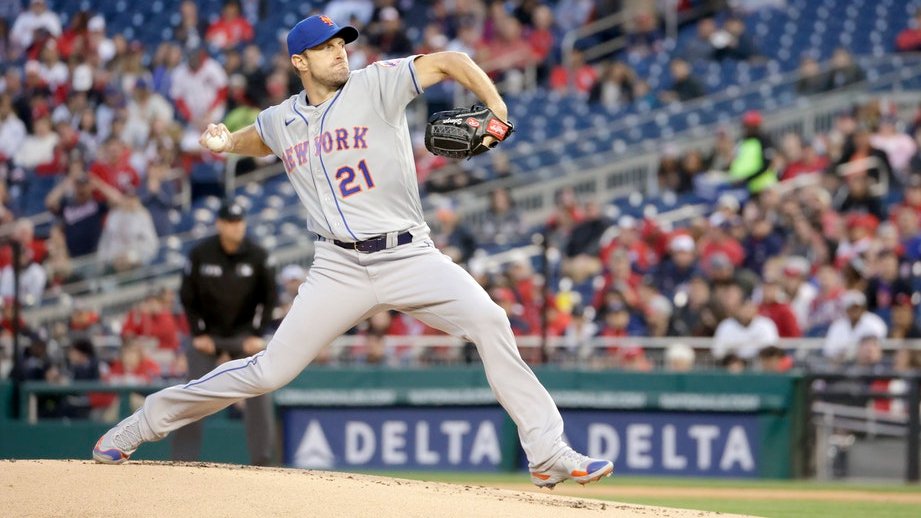 After a win over last year’s NL Cy Young runner-up, the New York Mets will send their three-time Cy Young Award winner to the mound as they seek an MLB series win this afternoon in Philadelphia.

In Monday’s series opener, the Mets were cruising towards a win, leading 4-0 heading into the bottom of the eighth inning. But in that frame, relievers Trevor May, Joely Rodriguez, and Seth Lugo combined to allow five runs and cough up the lead, and the Phillies pulled out a 5-4 win.

Last night, the Mets evened up the series, with Tylor Megill outdueling 2021 NL Cy Young runner-up Zack Wheeler. Single runs in the fifth and eighth proved to be enough, as the pen did not repeat Monday night’s issues in a 2-0 win for the visitors.

In today’s series finale, we have a top-tier pitching matchup, as three-time Cy Young winner and 2022 NL Cy Young favorite Max Scherzer matches up against Aaron Nola, who is looking to mount a Cy Young run after struggling last season.

He opened the season as the favorite for the NL award, edging out the other three pitchers who joined him in the top four of last year’s voting: winner Corbin Burnes, runner-up Wheeler, and fourth-place finisher Walker Buehler.

After his first start, he remains the favorite, though he was far from dominant in his Mets debut. But in a return to the stadium that he called home for over six and a half seasons, he picked up the win over the Washington Nationals last Friday. In six innings, he allowed three runs on three hits and a walk and struck out six.

It wasn’t spectacular, but he did at least post a quality start. And based on his career numbers against the Phillies, we should see another such outing from Scherzer in this matchup.

Career Numbers for Max Scherzer vs. the Phillies

In his 25 starts against the Phillies, Scherzer has 18 quality starts.

For the Phillies to win today and to have a chance to make a push for the 2022 MLB playoffs, Nola will need to return to that previous home form. In his 2022 opener, he picked up the win on Friday against the Oakland A’s, allowing four runs and four hits and struck out seven (with no walks) in six innings.

He may have gotten the win, but after allowing 26 homers last season, he allowed two long balls against the A’s. Against a stronger lineup, he will need to be sharper.

Philadelphia doesn’t love Scherzer, but Scherzer loves Philadelphia, and that will continue in this matchup.

It’s understandable that the Phillies are slight favorites with one of their most talented pitchers on the mound. Nola, when he is at his best, is one of the best pitchers in the league.

But he still has a lot to prove after last year’s struggles and combined with Scherzer’s success in Philadelphia and how the Mets have been the better team in this series other than Monday night’s eighth-inning implosion, the number that you can get at BetRivers is too good to ignore.

Alonso, one of the preseason favorites to be the MLB home run leader this season, has started slowly, hitting only .200 (5 for 25) with one homer and five RBI in six games. He hit a grand slam in Saturday’s 5-0 win over the Nationals, but he went 0 for 8 in the first two games of this series.

The 2022 French Open is underway at Stade Roland Garros in Paris, France, and we are already almost through the first week of play. Tomorrow, the remaining third-round matches will take place, after which the men’s and women’s singles draws will be down to their final 16 contenders. In both men’s and women’s singles, there END_OF_DOCUMENT_TOKEN_TO_BE_REPLACED