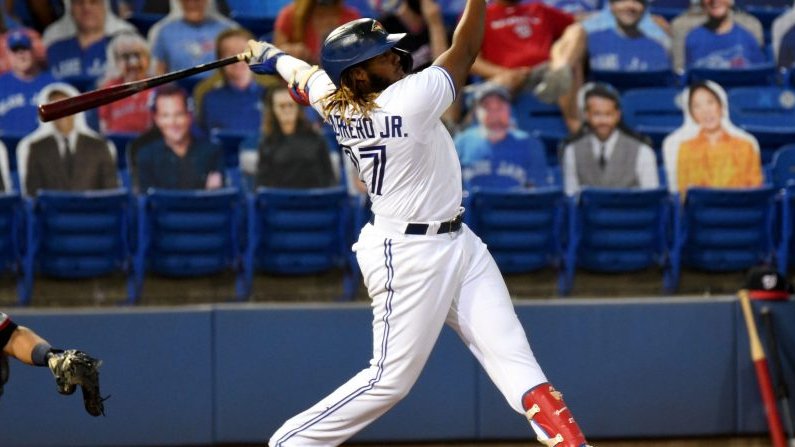 If you look at last season’s MLB home run leaders, there is a pretty common theme at the top: American League dominance.

Will most of MLB’s 2022 home run leaders also come from the AL? Even with the universal DH now in place, the odds are skewed in favor of AL sluggers. Of the top 20 players listed at FanDuel Sportsbook, 13 are from the AL.

Who Will Lead MLB in Home Runs in the 2022 Regular Season?

Odds are via FanDuel Sportsbook as of Thursday, April 7, 2022.

Fernando Tatis Jr., who led the National League with 42 home runs in 2021, is not listed. Tatis broke his left wrist–reportedly in an offseason motorcycle accident in the Dominican Republic–and will likely be sidelined for the first two-plus months of the 2022 MLB season.

Alvarez, Perez, and Brandon Lowe (Tampa Bay Rays) are all projected to hit 37 home runs, according to ESPN’s projections.

The favorite is not always the way to go, but this is one situation where it is. Look at what Guerrero did in his second full MLB season–.311 average, 48 homers, 111 RBI–at the tender age of 22. Provided he isn’t tripped up by injuries, look for him to have another monster year.

Teams can’t really try to pitch around him either, because they can easily get burned by someone else in that deep, dangerous Blue Jays lineup.

Stanton played only 41 games and hit just seven homers across the 2019 and 2020 seasons after hitting 38 homers in his first season with the Yankees in 2018.

Last season, he wasn’t hit hard by the injury bug, but he did not hit his 20th homer until August 19, which was his 104th game of the season. He finished the season with 15 homers in his last 36 games and had two streaks in which he homered in four consecutive games.

The key for Stanton is staying healthy and avoiding too many extended skids. He hit more homers in July and August (19) than he did the rest of the season. Combine good health and more consistency, and he has the potential to end up at the top of the home run charts this season.

The 2022 Formula 1 season is only six races deep, but the race for this season’s championship alerady appears to be down to just two drivers. Last season, Red Bull driver Max Verstappen claimed his first Formula 1 World Drivers’ Championship in highly controversial circumstances, with Lewis Hamilton denied what would have been a record-breaking END_OF_DOCUMENT_TOKEN_TO_BE_REPLACED