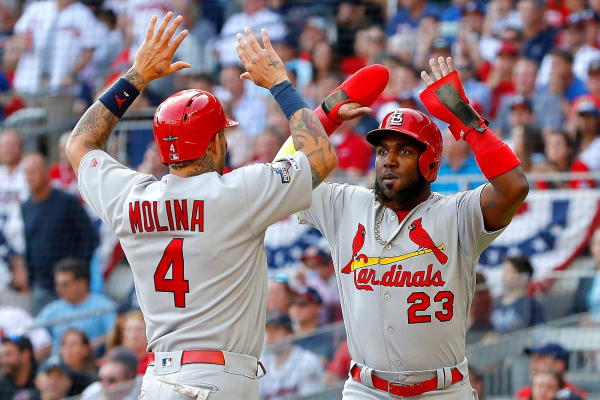 Through four games, the National League Division Series between the Atlanta Braves and St. Louis Cardinals had been extremely tight. With no game being decided by more than three runs and just one run separating the teams in Games 1 and 4, it’s fair to say it had been an incredibly close series.

Game 5 was anything but close.

With a 10-run explosion in the first inning on Wednesday, St. Louis put the game out of reach before the Braves even had a chance to step to the plate. The Cardinals tacked on a few more over the next couple of innings, making it 13-0 by the end of the third.

In the end, Atlanta lost the game 13-1 on the back of a record-breaking first inning, and their season is over. Now, the underdog Cardinals will face off against the underdog Washington Nationals, who defeated the top-seeded Los Angeles Dodgers with a 10th-inning grand slam to win their series 3-2, as well.

It took five games for the Cardinals to take down the Braves and reach the National League Championship Series, but St. Louis won’t care, especially after Atlanta entered the series as -141 favorites to move on to the next round.

Let’s take a look at how St. Louis pulled it off.

With the most productive first inning in MLB postseason history, St. Louis jumped out to a massive lead that proved far too much for Atlanta to overcome. And it all started against Mike Foltynewicz, the Braves pitcher who blanked the Cardinals in Game 2.

This time around, Foltynewicz was only able to get one out before being pulled from the game. In his 1/3 of an inning pitched, Foltynewicz allowed three hits, three walks, and seven runs (six earned).

Before even taking the mound, Cardinals starting pitcher Jack Flaherty had a walk, a run, and an RBI to his name as a batter.

Much of the damage was done on three two-run doubles, by Dexter Fowler, Tommy Edman, and Kolten Wong. Wong finished 2-of-3 with a pair of RBI.

As five St. Louis players batted twice in the opening frame, the offensive outburst was largely spread out. No Cardinal had more than two RBI in the game.

While Foltynewicz’s only out of the contest came on a sacrifice bunt by Wong, the second batter up, Flaherty was able to last six innings in which he recorded eight strikeouts, a single walk, and only one earned run.

As the Wild Card round ended, St. Louis entered the division series with odds of 14/1 to win the World Series, ahead of only the Minnesota Twins, with 14/1 odds, and the Tampa Bay Rays and their 28/1 odds.

The Houston Astros, who are set for a Game 5 against the Rays on Thursday, entered the postseason with the best odds of all at 2/1. The Los Angeles Dodgers, who were just knocked out by the Nationals, entered their NLDS series with 9/4 odds, followed by the New York Yankees (9/2), Braves (9/1), and Nationals (12/1).

It’s fair to call St. Louis’ NLDS victory an upset, but are they now poised to make a World Series run?

The Nationals and Cardinals will face off in Game 1 of the NLCS on Friday in St. Louis.

When the NLDS was nearing its climax, not much had changed regarding the National League Pennant odds for the four NL teams. The Dodgers were still frontrunners with -150 odds to win the National League, followed by the Braves (+380), Nationals (+600), and Cardinals (+710).

With the two top teams now eliminated, St. Louis still enters the NLCS with lesser odds to win the pennant than Washington. However, this will be a series with odds as close to even as possible, with both clubs showing incredible grit and poise thus far in the postseason.

If the Cardinals can get by the Nats, their toughest task awaits in the World Series, where they’ll likely face one of the favorites, with the Astros, Rays, and Yankees all still alive at the moment.