Instant Reaction: Nationals Win, Move on to Face Dodgers. Do They Have Any Chance? 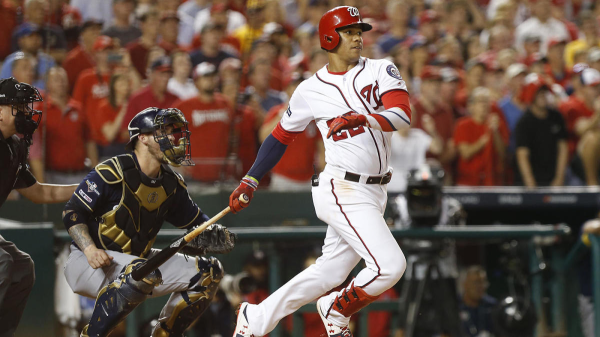 Going into the postseason, most MLB experts laid it all out like this: The two far-and-away best teams in the National League are the Dodgers and Braves, and the Nationals are the only team with a chance to take them down.

Well, when Nationals veteran starter Max Scherzer started the NL Wild Card game by walking the leadoff man before giving up two homers within the first six batters to go down 3-0, it looked like Washington would never get its shot to pull a big upset.

Despite the rocky start, the Nationals proved their grit by coming back from a 3-1 deficit in the eighth inning. In the end, it took three strong innings of relief from Stephen Strasburg, a huge bases-loaded hit from Juan Soto on which Anthony Rendon scored the go-ahead run from first, and a scoreless ninth from closer Daniel Hudson.

Although Rendon and the Nats were only able to go up 4-3 on Soto’s hit because Milwaukee outfielder Trent Grisham charged in too hard and misplayed Soto’s knock, Washington deserves a ton of credit for slogging through a three-run eighth inning against All-Star reliever Josh Hader.

With their ninth straight win, the Nationals earned themselves a date with the Dodgers in the NLDS. When it all kicks off on Thursday, does Washington stand a chance?

It felt like the Dodgers led the National League for the entire season. Yet all that’s good for in October is home-field advantage and nothing more.

However, Los Angeles claimed the top spot in the NL for a reason: Being one of the most complete teams in baseball.

Offensively, the Dodgers scored a total of 886 runs in the regular season, which was good enough for fifth in the majors. The Nationals were right behind them with a sixth-best 873 runs scored.

On the back of MVP candidate Cody Bellinger’s 47 dingers, Los Angeles hit the fourth-most home runs in baseball with 279. The Nationals don’t have quite as much power, hitting only 231 homers throughout the season (13th).

The real advantage comes from the pitching staff, where the Dodgers own a 3.37 ERA, which is tops in the majors. Washington entered the postseason with the 13th-best ERA of 4.27.

Yet when these two clubs step on the field, we’re going to see a lot of similarities.

Both teams also have strong starting pitching, with an ace who struggled towards the end of the regular season.

The big difference could be the relief pitching of Washington, which has been very poor. With a bullpen ERA nearing 6.00, the pitching staff beyond the starting rotation is Washington’s fatal flaw.

Entering the NLDS, the Dodgers have the second-best odds in the majors to win the World Series at +300. You’ll find the Nationals all the way down sixth, where they hold +1400 odds.

But let’s take out the American League teams and focus on the odds to win the National League Pennant.

Heading into October, Los Angeles is the favorite to represent the NL in the World Series with odds of -120. You’ll have to look past the Braves (+290) and Cardinals (+560) in order to find the Nationals and their +740 odds to win the National League.

So, it’s fair to call the Nats a big longshot. However, if they can get deep performances from their starters and continue showing the grit they had in the eighth inning against the Brewers in the NL Wild Card game, don’t count Washington out just yet.