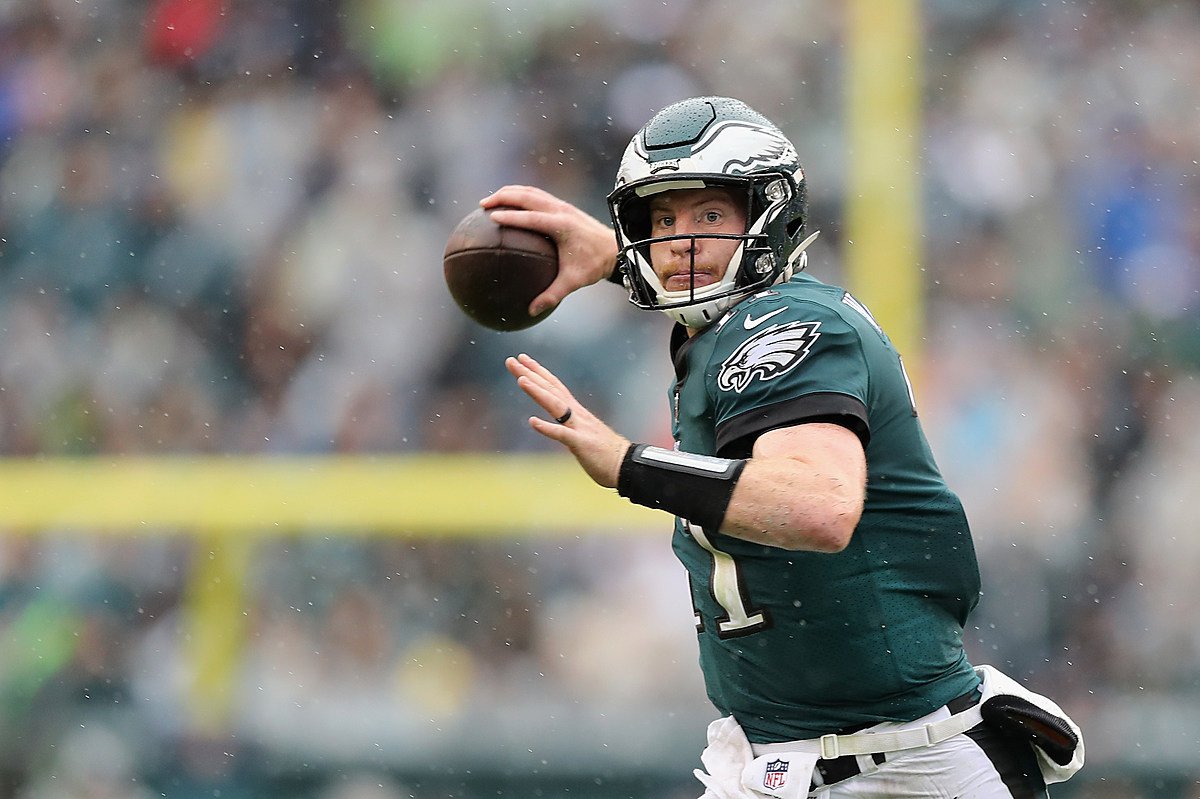 Following the recent Matthew Stafford trade, it looks like the next NFL quarterback domino to fall will be a Carson Wentz trade. The Houston Texans remain insistent that Deshaun Watson is going to remain in Houston, so unless they blink soon, Wentz is likely to be the next big name on the move.

It looked like Wentz would be packing his bags imminently, but a move has not transpired just yet. However, it does appear that there are two suitors standing out above anyone else: the Chicago Bears and the Indianapolis Colts. In fact, last Saturday, there were rumors that the Bears and Eagles were on verge of a deal. However, those rumors were apparently just a bit premature.

Still, it is the Bears who hold the edge in the latest Wentz trade odds at PointsBet Sportsbook. The Bears are listed at +115 to complete a Wentz trade, while the Colts are +135. Off in the distance are the Denver Broncos at +850, followed by Washington (+1000) and the Carolina Panthers (+1300).

Assuming a Carson Wentz trade is to either the Bears or the Colts, what will he bring to either team? Can he significantly enhance either team’s Super Bowl 56 odds?

How Does It Help the Bears?

Last season, the Bears backdoored it into the postseason with an 8-8 record. Then they were promptly dumped out in the wild-card round by the New Orleans Saints.

The Bears went from Mitchell Trubisky to Nick Foles then back to Trubisky last season. With Trubisky starting the first three games and Foles the next three, the Bears started 5-1. Then Foles lost four straight starts, got injured, and was replaced by Trubisky, who started the last six games.

Trubisky was not spectacular, but he did enough to potentially warrant one more shot. That said, the Bears are aiming for higher. Trubisky has not yet shown he can help them seriously challenge in the NFC.

The Bears have a promising running back in David Montgomery, who ran for 1,070 yards last season. They also have a star receiver in Allen Robinson, who had 102 catches for 1,250 yards last season. At 27, Robinson’s best years are ahead of him as well.

The Bears were not as stout defensively as hoped, but improving the offense would be a big defensive boost. Chicago was 18th in the league in time of possession percentage last season (49.56%).

In the opening Super Bowl 56 odds, the Bears were listed at +6000. A Wentz trade would move the needle significantly, without a doubt. However, it would not place the Bears in the upper echelon of favorites.

How Does A Carson Wentz Trade Help the Colts?

While the Colts have to contend with Patrick Mahomes and Josh Allen, among others, for the foreseeable future, they also are primed for success of their own. Last season, they went 11-5 and narrowly lost to the Bills in the wild-card round. Now, after the retirement of Philip Rivers after his lone year with the franchise, the Colts are looking for a quarterback again.

Like the Bears, the Colts have a talented young running back. As a rookie, Jonathan Taylor ran for 1,188 yards and 11 touchdowns, including 741 yards and seven touchdowns in his last six games. The Colts also utilized a lot of depth in the passing game, with 11 players catching at least 10 passes.

Defensively, Indianapolis has a core that should be in place for a while. Nine of their top 10 leading tacklers last season were 27 or younger, with the oldest being 30-year-old Xavier Rhodes.

All the Colts need, other than perhaps an addition at receiver–T.Y. Hilton is a free agent, is a quarterback. Rivers did much of what the Colts needed him to, and he improved as the season progressed. But he was also at the back end of his career.

Early Super Bowl 56 odds placed the Colts at +2900. A Carson Wentz trade could potentially bump their odds inside +2000. That said, the unknown about what he would provide them is likely to keep them behind the likes of the Chiefs, Bills, and Ravens in the AFC.

Is A Carson Wentz Trade Worth It?

The big question is whether or not a Carson Wentz trade is worth the investment. Acquiring him will not take the haul that it took the Los Angeles Rams to land Matthew Stafford. But the Eagles will try to hold out for the best deal possible.

Wentz took a major step back after three seasons in which he threw for 87 touchdowns to 21 interceptions. In 12 games, he completed only 57.4 percent of his passes and threw 16 touchdown passes and a career-high 15 interceptions. His passer rating was a career-low 72.8, lower than his rookie-year rating of 79.3. Also, he recorded a career-worst 6.0 yards per attempt.

However, a change of scenery, the confidence of the coaching staff, and a chip on his shoulder could potentially work wonders for new Detroit Lions quarterback Jared Goff. The same could be the case for Wentz. He is 28, and his best years are ahead of him. That is, if he can put the bad ending in Philadelphia behind him and turn things around.