Bears and Browns Sexy Picks to Win Super Bowl, But Is It Realistic? 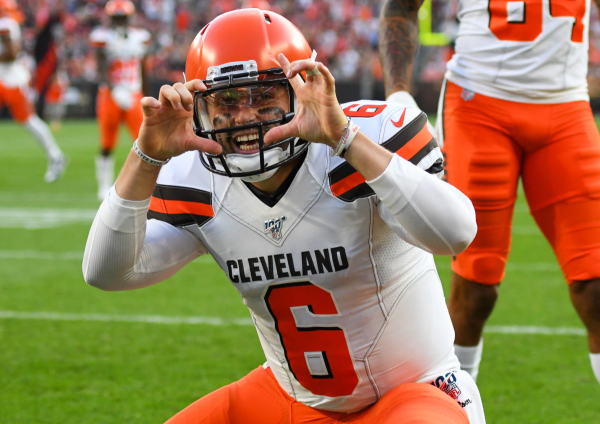 Everybody loves an underdog. And when it comes to the 2019 Cleveland Browns and Chicago Bears, there’s a beautiful mixture of underdog status, classic football nostalgia, and flash that’s making both of these clubs the sexy picks to win the Lombardi Trophy.

Of course, this all achieves Cleveland underdog status before even mentioning the fact that they’ve never won the Super Bowl.

Now, with the likes of Baker Mayfield, Odell Beckham Jr., and Myles Garrett injecting this squad with young talent, most have the Browns pegged as a contender this year.

Although Chicago has enjoyed the successes of the 1985 Super Bowl title and legendary players like Walter Payton, it’s been nearly 35 years since Chi-Town has claimed the Lombardi Trophy. In recent years, the Bears have done their fair share of suffering, including a Super Bowl loss to Peyton Manning’s Colts in 2007.

Now, Chicago appears to have built a roster that’s ready to excel on both sides of the ball. So, will an offense led by Mitchell Trubisky and a defense armed with Khalil Mack give the Bears a realistic shot to win it all?

Despite a record of 7-8-1, 2018 was a wonderful year for most Browns fans. Why? In addition to escaping last place by besting the 6-10 record of the Bengals and tallying more than three wins for the first time in four years, the Browns feel like they have a quarterback.

After decades of suffering at the QB position, the first overall pick in the 2018 draft has Cleveland buzzing. Ever since making his NFL debut by coming on late in the first half and overcoming a 14-point deficit to claim victory over the New York Jets, Mayfield has been the star of the city.

Mayfield went on to finish out 2018 with 3,725 yards, 27 touchdowns, and 14 picks while completing 63.8 percent of his passes. That’s a very good rookie season for any quarterback, and now he gets to play with a shiny new toy in the form of Odell Beckham Jr.

So, will a roster filled with Mayfield, Beckham Jr., Jarvis Landry, Nick Chubb, Olivier Vernon, Garrett, Denzel Ward, and more NFL talent be able to bring Cleveland from seven wins to playoff football and through the AFC?

While Vegas sees them as a team with a shot, both the Chiefs and Patriots are the heavy favorites in the AFC. At Westgate, Kansas City and New England are both sitting on 6/1 odds to win the Super Bowl, while Cleveland (18/1), which has been the second-most popular bet behind the Bears, is behind a total of seven teams.

The two big issues holding Cleveland back from being a realistic contender are how far ahead the Chiefs and Patriots are, as well as the fact that the Colts (12/1) and Chargers (18/1) make the AFC a very deep conference with several teams ready to win right now.

With 3,223 yards, 24 touchdowns, and 12 picks while completing 66.6 percent of his passes, Trubisky made a huge leap within Matt Nagy’s offense. However, the real strength of this Bears team is defense.

In 2018, Mack and Co. allowed just 17.7 points per game, which was good for the top overall spot in the NFL. Now, with an offense that can put up points and a defense that feels like it can stop anybody, the Bears are poised to make a run at the Super Bowl.

Generating the most bets to win the Super Bowl, bettors see great value with the Bears. And with 12/1 odds to win it all, Chicago is neck and neck with the Rams, Saints, and Eagles in the NFC.

Without Kansas City or New England blocking a path to a conference championship, the Bears have to be considered a realistic contender going into 2019 with a stacked roster and solid foundation from a year ago.