Are the Cleveland Browns a Complete Sucker Bet to Win The Super Bowl? 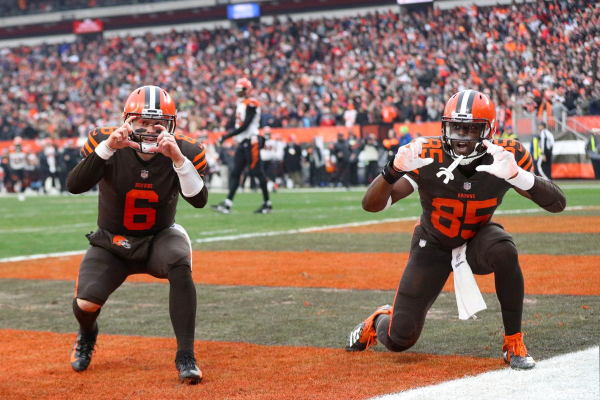 As we get closer and closer to the start of the NFL season, one question we all have is: How good will the Cleveland Browns actually be? We’re talking about a team that hasn’t had a winning record since the 2007 season, went 1-15 in the 2016 season, and followed that up with a winless season in 2017.

They made vast improvements last season with the addition of No. 1 pick Baker Mayfield and Jarvis Landry, along with a solid backfield that included Nick Chubb, Carlos Hyde, and Duke Johnson. For the first time in a long time, the organization and fans felt like things might be going in the right direction.

Flash forward to the 2019 offseason and the Browns have added star wide receiver Odell Beckham Jr. to play alongside his former college teammate “Juice” Landry, providing the organization with a wide-receiver tandem that any defense will fear.

Now, of course, it’s going to take more than a high-powered offense for this team to go far into the playoffs, but they’ve also made defensive additions in Sheldon Richardson and Oliver Vernon. Newly-added defensive coordinator Steven Wilks looks to have more success than he had last year, coming off his one and only season as head coach for the Arizona Cardinals, who went 3-13.

It’s hard to disagree that the Cleveland Browns are an exciting team coming into the 2019 season, but are they being hyped up more than they deserve? Last year’s running back coach, Freddie Kitchens, is looking to start off his first season as head coach in the right direction. As of now, Vegas is gifting the Browns with the ninth-best odds to win the Super Bowl.

They come in with 16-1 odds, giving them better chances than teams like the Los Angeles Chargers, a team that made it into the second round of playoffs last year and ended up falling short to the Super Bowl-winning Patriots.

These odds seem to be a little deceiving considering the Browns finished with a 7-8-1 record last year. Are a couple of mid-level defensive additions and the high-flying Beckham enough to put them over the edge? If you’re looking for a safe bet to win the 2020 Super Bowl, the Browns are quite the risky pick. You can get similar odds from teams that have proven a lot more in recent years, like the Eagles, Steelers, and Seahawks.

Not The Worst Option

Anyone that’s unfamiliar with odds in a sportsbook, a 16-1 chance at the Super Bowl means that throwing $100 down could result in a $1,600 return. Yes, it sounds great in theory, but when you look at a team like the Patriots (who have won six Super Bowls in the past 17 seasons) having 6-1 odds, this seems like a much safer play for your hard-earned money.

Now if you’re looking for a small-risk, high-return bet, the Browns may not be the worst option on the board. As mentioned before, though, there are various teams that have similar odds with a roster and coaches that have worked together for an extended amount of time.

Only time will tell if the Browns are a viable option to win the Super Bowl, but as of now, there are more than a handful of picks that will give you a greater chance to cash out your money at the end