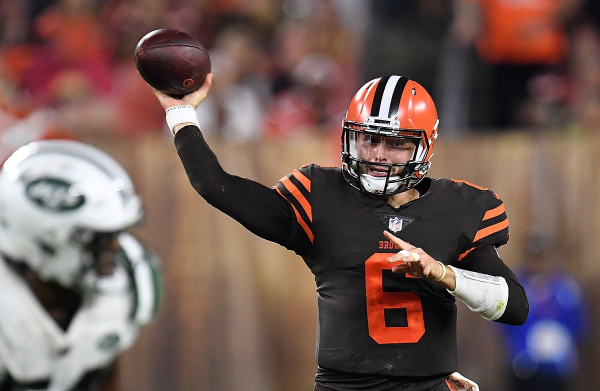 The Cleveland Browns went from zero wins in 2017 to seven wins in 2018, and that has fans thinking big this season. Cleveland should have one of the most explosive offenses in the league this season, and their defense is full of young talent. The Browns missed the playoffs by just one game in 2018, and it appears that they could finally take the next step this season.

Cleveland finished the 2018 regular season with a record of 7-8-1, and they were in almost every one of their eight losses. The Browns finished in third place in the AFC North, and come into the 2019 season as the betting favorite. Cleveland was a great team to bet on last season, finishing with a 10-6 record against the spread. The Browns will be favored in plenty of games this season.

The biggest splash that the Browns made in the offseason was acquiring Odell Beckham Jr. from the New York Giants. OBJ gives the Browns one of the best receivers in football, but there is some baggage that comes with him as well. Firing Hue Jackson as the head coach and replacing him with Freddie Kitchens was another move that could pay huge dividends in 2019.

Baker Mayfield: Mayfield burst onto the scene in 2018, throwing 27 touchdown passes to just 14 interceptions as a rookie. The Oklahoma product completed over 63 percent of his passes and ran for nearly 200 yards as well. If the Browns do have a big year in 2019, it will be Mayfield that’s leading the way.

Odell Beckham Jr.: Odell Beckham Jr. is one of the most talented receivers in football, but his off-field antics can cause some trouble. Beckham caught 77 passes for 1,052 yards a season ago and should blow by those numbers this season. OBJ will quickly become the top target for Mayfield.

Nick Chubb: Cleveland has a lot of running backs on its roster, but Nick Chubb will likely get most of the playing time. Chubb ran for 996 yards in 2018 and scored eight touchdowns. The Browns have a talented group on offense, and Nick Chubb should break the 1,000-yard barrier this season.

Rookies: Cornerback Greedy Williams from LSU was selected in the second round by the Browns, and most people think that he was a steal. Williams should see significant playing time this season. Kicker Austin Siebert is another important rookie piece for the Browns after Phil Dawson announced his retirement.

2019 Predictions to Season/Best Bets to Make

There is plenty of hype surrounding the Cleveland Browns this season, and there should be. The Browns have one of the most talented teams in the AFC on paper, and now it’s time for them to prove it on the field. Some people are picking the Browns to win the Super Bowl this season, but that’s a little bit too much. Cleveland will be very good, but let’s see what they do in the playoffs first. The best bet to make is to take the Over -125 on 9.0 wins this season. Picking the Browns to win the AFC North at +120 is another bet to look at, but they will be in a close race with the Pittsburgh Steelers all year. The Browns are set for a big season in 2019, and it should be a fun fall for the folks in Cleveland.