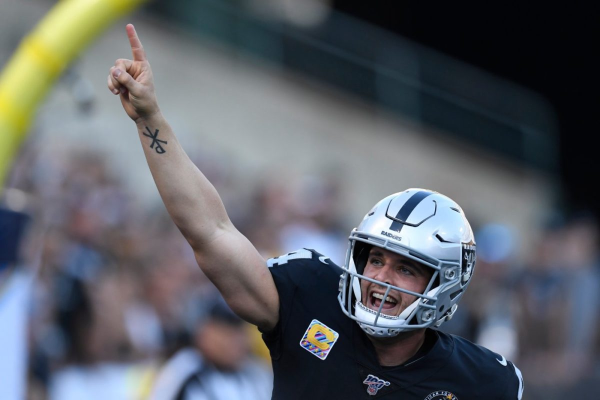 When the Oakland Raiders and Los Angeles Chargers take the field for Thursday Night Football, we may finally gain something in the way of an answer towards the question we all have about these two teams: Is either one any good?

Right now, Oakland sits at 4-4 and in second place within the AFC West. Los Angeles has played one more game, so its 4-5 record slots it into third in the same division.

However, that doesn’t tell the whole story. Both teams have had good moments, such as Oakland’s win over Chicago in London or Los Angeles’ 26-11 demolition of Green Bay. And both teams have had bad moments, like the Raiders’ 20-point loss to Minnesota or the Chargers’ three straight defeats to Denver, Pittsburgh, and Tennessee.

So while Oakland is a .500 team with a negative differential, Los Angeles is one of two teams with a losing record but a positive differential. The Chargers may have been bitten by the bad luck bug this season, but as Bill Parcells often said, “You are what your record says you are.”

Either way, this is a huge game for two teams in the clump of AFC mediocrity with positioning in the playoff race on the line.

We’re currently at the halfway point of the NFL season, and the playoff race is shaping up in both conferences. In the AFC, every division leader is currently leading its division by two wins except for in the AFC South, where the 6-3 Texans are just ahead of the 5-3 Colts.

The 8-1 Patriots continue to dominate the AFC East despite their recent loss to Baltimore, and the 6-2 Bills are second in the division.

The 6-2 Ravens have a stranglehold on the AFC North right now, as they don’t appear to be in much danger from the 4-4 Steelers.

And in the AFC West, both the Raiders and Chargers trail the 6-3 Chiefs.

All of the above boils down to this: The AFC Wild Card picture is wide open.

At the moment, the six-win Bills have the lead in the Wild Card race, but they’ve lost both their games against teams over .500 and will run into the Cowboys, Ravens, and Patriots down the line.

Next up, we have the Colts, who’ve proven themselves a quality football team despite Andrew Luck’s retirement. And after Indianapolis, five teams, including the two playing this evening, are stuck on four wins.

A win for the Chargers would bring them up to 5-5 and breathe new life into a team that began the year with Super Bowl aspirations. A loss would all but knock them out of the race at 4-6.

A win for the Raiders would boost them to 5-4 and keep them right on the heels of the Bills and Colts for one of the two Wild Card spots. A loss would push them below .500 and give a host of teams the chance to overtake them this weekend.

Will Thursday’s Winner Get A Wild Card Berth?

At this point in time, neither the Chargers or Raiders are a favorite to make the playoffs in the AFC. Of the two, Oakland is currently the more likely team to earn a Wild Card berth, according to the odds.

To make the playoffs, the Chargers are sitting on +450 odds. With the same parameters, the Raiders are offering +225 odds.

Now, a win for Los Angeles this evening would likely flip those odds to some degree, but it appears that Oakland has a significant advantage with one fewer loss on its record.

So, if the Raiders win and move to 5-4, the mission becomes simple: Beat out the 6-2 Bills or the 5-3 Colts. And with a remaining schedule that only features one team currently over .500, the Chiefs, that outcome could easily be in the cards.