Chiefs Win Minus Mahomes, Setting Up For Great Finish To Season 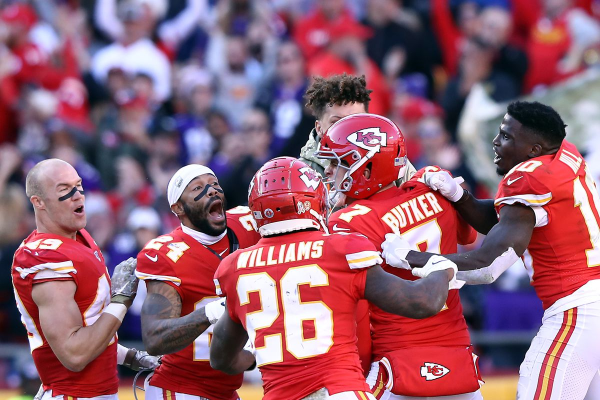 When the news hit that Kansas City would once again be without Patrick Mahomes with 6-2 Minnesota coming to town on Sunday, a Chiefs team that fell to Green Bay a week ago knew it was in danger of dropping its fourth straight home game.

As Mahomes watched from the sideline in street clothes, backup quarterback Matt Moore threw for 275 yards and a touchdown with no interceptions. In the end, Moore and the offense did enough to set up Harrison Butker for a 44-yard, game-winning field goal that the kicker put through the uprights as time expired.

Going up against a Vikings offense that features the likes of Dalvin Cook and Stefon Diggs, the Chiefs defense held Minnesota to 23 points. That turned out to be just enough for the Kansas City offense, which reached 26 points on Butker’s fourth field goal of the contest.

Although Mahomes wasn’t out there launching the ball all over the field, the Chiefs certainly showed glimpses of their explosiveness. In addition to a 91-yard Damien Williams touchdown run, Moore was able to complete several long passes to Tyreek Hill, who finished with 140 yards and a TD.

With that hard-fought victory, Kansas City moved to 6-3 on the season with seven games remaining. Let’s take a look at what the Chiefs should be aiming for as they approach the finish line.

When Mahomes went down in a Thursday Night game against Denver, the timing felt terrible with Green Bay and Minnesota next up on the schedule. Yet Kansas City was able to split those two games with Mahomes appearing to be healthy once again.

For a Chiefs team that started the season as Super Bowl favorites alongside the Patriots, the remaining schedule gives them a chance to regain some of that luster that made them one of the most dangerous teams in the league a year ago.

For now, Kansas City is in first place in the AFC West with a record of 6-3. The closest team within the division is 4-4 Oakland, which shouldn’t figure to threaten the Chiefs for the division title, although these two teams will meet in a few weeks.

At 6-3, the Chiefs are tied with AFC South-leading Houston and behind the 8-1 Patriots and 6-2 Ravens, who just took down New England on Sunday Night Football.

So, what should Kansas City be aiming for?

New England was handed its first loss of the season, but it still figures to be a top team in the NFL with a good head start towards a bye week in the playoffs. With Baltimore ahead by one loss, the Chiefs should certainly be seeking a top-two seed that would gift them a bye week.

When you take a peek at the remaining schedule, that goal is certainly attainable. Of Kansas City’s seven remaining games, only one – a Week 14 showdown with New England – is against a team above .500 right now.

With an upset win over the Patriots and a little bit of luck, the Chiefs still have a chance to claim the top overall seed in the AFC and earn home-field advantage throughout the playoffs. However, let’s focus on whether or not the Chiefs are considered a top-two seed in the conference with the other bye-week playoff spot in focus.

Despite their loss to Baltimore, the Patriots are still the odds-on favorite in the AFC with -120 odds to win the conference.

After New England, a tight two-team race features the Chiefs at +475 and the Ravens at +500. Trailing behind those three franchises by a wide margin are the Texans, who currently hold +1200 odds of winning the AFC.

Based on those numbers, the Chiefs appear to have survived the Mahomes injury scare and once again look like one of the favorites in the AFC, although they’ll now have to overcome a strong Ravens team that just showed us they can beat anyone.