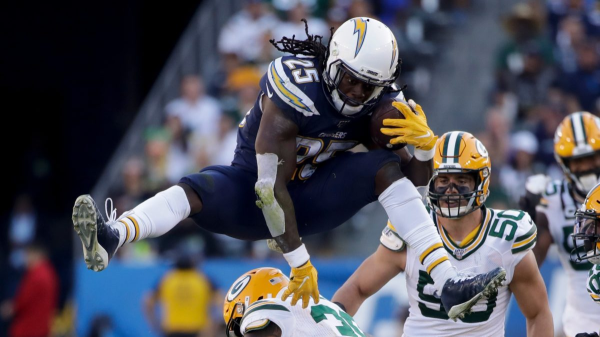 Thursday Night Football features an AFC West showdown as the Los Angeles Chargers (4-5) travel to Ring Central Coliseum to take on the Oakland Raiders (4-4). Both of these teams are looking up at the first-place Kansas City Chiefs but sit within striking distance just a couple games back. With that in mind, every win is imperative at this point, and both will be looking to get the division win Thursday. Kickoff for this one is scheduled for 8:20 pm ET.

The Chargers are coming off back-to-back wins as they upset the Bears 17-16 on the road, followed by a shocking win over the Green Bay Packers 26-11 last week at home. There are questions about whether they can sustain their success, but they hope that this is a sign of good things to come. Last week, after the firing of offensive coordinator Ken Whisenhunt, the Chargers seemed to be clicking on all cylinders, being relatively successful both in the air and on the ground. Most notably, they got Melvin Gordon going, as he put up a season high in rushing yards.

The Raiders are coming off a 31-24 win over the Detroit Lions last week. The Raiders had quite a tumultuous offseason with the drama of the Antonio Brown but now seem focused and have been playing respectable ball. Their defense will certainly need to shore up against Philip Rivers, but if they can, they have been playing well enough to come away with a win in this one.

The Los Angeles Chargers come into this as one-point favorites despite playing on the road. The over/under for points scored is set at 49.5.

On the defensive side, it is the Los Angeles Chargers that come in way ahead. They rank eighth in the league, allowing an average of 18.7 points per game to opponents (15.5 points on the road). The Raiders are 26th overall, allowing 27 points per game (22.7 points at home).

Chargers Look For Three In A Row

At 4-5, the Los Angeles Chargers know that they need to get it rolling if they want any opportunity to make the postseason. Even with a good run, it might not be enough. Still, Rivers will look to take it one game at a time, and that starts with the Raiders Thursday. On the season, Rivers is 223 for 333 for 2,609 yards, 12 touchdowns and seven interceptions. In nine games, he has also been sacked 16 times.

Rivers’ leading receiver to this point has been Austin Ekeler, who has 55 catches for 530 yards and five touchdowns from the backfield. Keenan Allen (54 catches, 657 yards, three touchdowns) and Mike Williams (29 receptions for 530 yards) have also been instrumental in the passing game.

On the ground, expect Gordon to get the lion’s share of the carries for the Chargers. On the season, he has 64 carries for 192 yards and three touchdowns. Against the Packers, he had 20 rushes for 80 yards and two touchdowns. This was a significantly better performance than lately as his usage has been inconsistent since he came back from his holdout. In fact, in the three games prior to the Packers game, he had only rushed 32 times total.

Despite the frustrations off the field, the Raiders have shown signs of life on the field this season. Quarterback Derek Carr has had a decent start to the campaign, going 178 for 250 for 1,984 yards, 13 touchdowns and just four interceptions. In eight games, he has been sacked just nine times.

While Carr has been solid, the real value has been with running back Josh Jacobs. On the season, Jacobs has 152 carries for 740 yards and six touchdowns. In fact, in three of his last four games, he has rushed for at least 120 yards.

Chargers Make It Three In A Row

Thursday night games are always odd, so with the spread so tight, this is truly a pick ’em type game. With that in mind, I have to go with the Chargers in this one. Not only are they the hotter of the two teams, but the Raiders have really struggled against the pass this season. I expect that Rivers will have a lot of success through the air.

Throw in the fact that the adjustments to the run game were noticeable last week, and this could be a balanced attack that the Raiders have trouble stopping. Don’t get me wrong, the Chargers will have a tough time trying to slow down Josh Jacobs, but ultimately, I like the Chargers at -1 in this one.