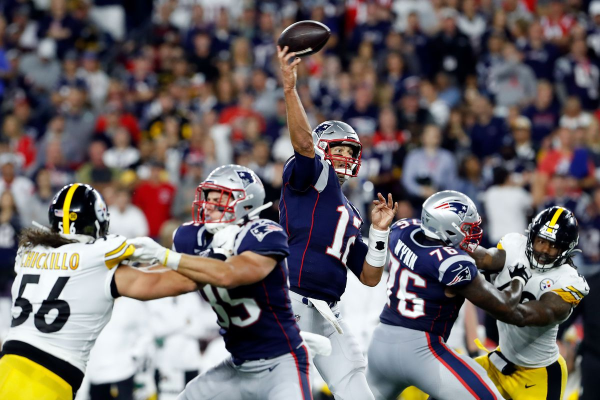 The Patriots Crushed Pittsburgh 33-3 as the New England machine chugs onward, but will the Steelers’ struggles continue?

The Patriots decimated the Pittsburgh Steelers 33-3 on Sunday night, as the Patriots-Steelers “rivalry” continued with yet another dominating destruction of the AFC North odds-on runner-up. The easy win confirmed that the Patriots are still just as dominant of a football machine as they have ever been, and all teams in the AFC should take notice.

But are the Steelers going to end up wallowing in utter mediocrity, or is this just a little bump in the road for the once-great franchise?

If the win re-affirmed anything, it’s that Tom Brady still appears as ageless as he ever has, throwing for 341 yards, three touchdowns, and no interceptions, with a 124.9 passer rating. Brady was 24-of-36, with Phillip Dorsett catching two touchdowns and Josh Gordon snagging the third.

The Patriots’ dinking and dunking combined with timely long-balls completely eviscerated the Steelers, making it yet another rendition of dominate-the-Steelers-in-Foxborough that football fans have come to see these past few seasons.

With some notable sports personalities taking to Twitter, proclaiming they were going to put their 401ks on the Steelers due to the Patriots — namely Brady — being washed-up, they are likely eating their hats following Sunday evening’s game. The Patriots look anything but old, and if anything, they appear to be just as sharp minus the likes of recently-retired Rob Gronkowski, and soon-to-be-playing Antonio Brown, who was just signed after being released by the Oakland Raiders on Saturday.

As great as the Pats looked, the Pittsburgh Steelers and their seemingly over-the-hill QB are trending in the completely opposite direction.

While the Patriots looked as great as they ever have, the Steelers seem to be moving in the completely opposite direction. Their inability to make things happen on both sides of the ball was apparent, with receivers dropping easily catchable balls and predictable play-calling getting absolutely stuffed by New England’s defense.

After a rather solid preseason, Steelers fans had big expectations for their squad going into Sunday’s contest, but as usual, they struggled on the road in New England against Brady.

Ben Roethlisberger threw for 276 yards, no touchdowns and an interception. Running-wise, the Steelers couldn’t get anything going, with the longest run being a Big Ben scramble for seven yards. Steelers halfback James Conner finished 21 yards on 10 carries, finishing a horrendous night with a long run of five yards.

While the New England defense is particularly stout, particularly at home, if the Steelers continue to have these kinds of offensive outages, competing in the AFC, let alone the AFC North, is going to be very unlikely, especially without Brown, who was far and away their best offensive player.

Opening Bets and Beyond

Bettors in Sunday’s game didn’t have much as a sweat, particularly if they were holding Patriots tickets. The Pats closed at around 5.5 to 6-point chalk, and the total closed around 46.5 to 47 points. The 36 total points made for a relatively easy cash for under bettors, and those who laid the points with the Pats could’ve turned the TV off at halftime, as New England led wire-to-wire, with the spread never being much of a factor whatsoever.

Looking ahead, the game will certainly have big implications going forward, as the Pats head down south to face the division bottom-dwelling Miami Dolphins, who were obliterated 59-10 by the Baltimore Ravens.

The Patriots will be laying 16 points on the road, and the Steelers will be 4.5-point favorites at home against the Seattle Seahawks, who edged the Cincinnati Bengals 21-20 Sunday afternoon.

As with any week in this sport, overreactions will certainly cause considerable movement in both games, particularly the New England contest.