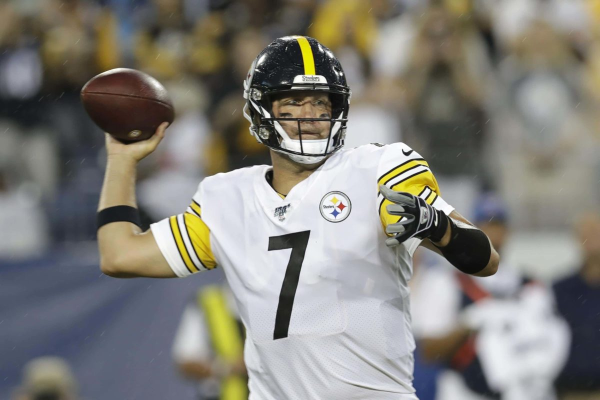 The Pittsburgh Steelers were a trainwreck both on and off the field in 2018, and the season ended without a trip to the NFL Playoffs. The Steelers have tried to eliminate those distractions and all of the drama in the offseason, and they should have a much better 2019 season. Pittsburgh plays in the AFC North Division, and the Cleveland Browns and Baltimore Ravens should be terrific as well.

Pittsburgh finished the 2018 season with a record of 9-6-1 and barely missed out on reaching the playoffs. The Steelers were slightly worse against the spread, posting a record of 8-7-1. This Pittsburgh Steelers team might look slightly different this season, but there is a standard of excellence that is expected, and this team should be much improved.

The two biggest news stories surrounding the Pittsburgh Steelers in the offseason centered around Antonio Brown and Le’Veon Bell. The Steelers had to make decisions on their two biggest offensive stars, and they decided to let them both leave. Pittsburgh signed cornerback Steven Nelson to a three-year deal in the offseason and also reached an agreement with linebacker Mark Barron. The Steelers tried to replace the loss of Brown by bringing in wide receiver Donte Moncrief. Pittsburgh really worked on improving its defense this offseason, and all of their moves should have a big impact this season.

Ben Roethlisberger: Roethlisberger threw for over 5,000 yards a season ago and continues to be one of the best quarterbacks in the league. He did throw 16 interceptions in 2018 but countered that by throwing 34 touchdown passes. The Steelers are, without a doubt, Big Ben’s team, and he will determine how far they go.

James Conner: Conner played in just 13 games a season ago and fell 27 yards short of 1,000 rushing yards. Conner was extremely impressive in taking over for Le’Veon Bell, and he has a terrific offensive line to run behind. Don’t be surprised to see Conner break the 1,000-yard mark this season.

Rookie Class: Linebacker Devin Bush was chosen by the Steelers in the first round of the NFL Draft, and he is expected to start from day one. Bush will be trying to fill the void that was left when Ryan Shazier suffered a neck injury.

Missing the playoffs is not a very common thing in Pittsburgh, and they will be out for some revenge this season. Vegas has set the win total at 9.0 wins, and the Steelers are going to go OVER that mark and finish the season with at least 10 wins. The Cleveland Browns are getting all of the publicity in the preseason, but it will be the Pittsburgh Steelers +190 who win the AFC North. That’s as far as we are willing to take the Steelers though, as the AFC is just too loaded with great teams.