Patriots and 49ers Remain Unbeaten; Do They Have A Loss In Sight? 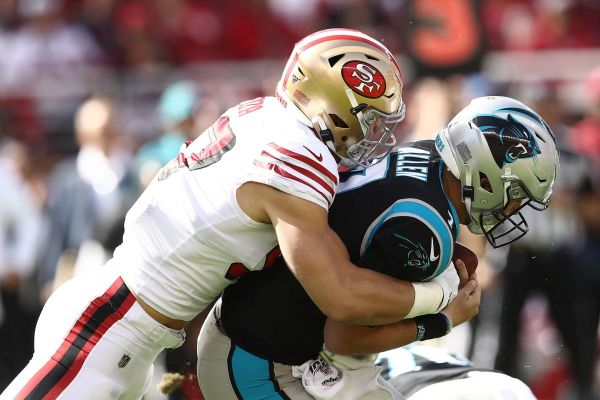 With New England’s comfortable win over Cleveland and San Francisco’s 51-13 throttling of Carolina on Sunday, the NFL’s two undefeated teams navigated through Week 8 of the season without a misstep.

The Patriots feel like a familiar story: A very well-coached team with perhaps the league’s best defense and an offense that’s always able to move the chains and put up points when needed.

That scary New England defense asserted its dominance once again on Sunday by sacking Browns quarterback Baker Mayfield five times, intercepting him once, and forcing running back Nick Chubb to fumble on back-to-back plays from scrimmage. Another contest that felt over before it started saw the Pats jump out to a 17-0 lead before ending 27-13 without Cleveland ever really threatening.

When it comes to the 49ers, the team everyone has been waiting to see falter continues to impress over and over again with a daunting defense of its own.

So, with New England and San Francisco sitting without a loss at the halfway point of the season, it’s time to find out where the league’s unbeatens could finally stumble.

With head coach Bill Belichick’s 300th win on Sunday, New England sauntered through the first half of its schedule without a blemish. In fact, a 16-10 victory over Buffalo in Week 4 has been the only game a Patriots opponent has kept within one score.

Offensively, the Patriots are scoring 31 points per game on 382 yards of offense. Although this unit isn’t nearly as dangerous as the 2007 Pats offense that featured the record-breaking duo of Tom Brady and Randy Moss, the current New England offense continues to feel like it’s always one step ahead of whichever defense it’s playing.

Allowing just 7.6 points per game, the New England defense is statistically the best in the NFL. This complete unit is led by linebacker Jamie Collins, who’s racked up 44 total tackles, six sacks, two forced fumbles, one fumble recovery, three interceptions, and a touchdown.

This Patriots squad is likely the best all-around team in the league, which is why they’re the favorite to win the Super Bowl with odds of +250.

But how long will the Super Bowl favorite remain unbeaten?

New England breezed through the first half of the schedule, but you’ll struggle to find many decent teams among their eight opponents thus far. Only the Bills have managed to remain above a .500 record, while the Pats have had the pleasure of playing some of the NFL’s worst teams – the Dolphins, Redskins, Jets, and Giants.

As the schedule now gets tougher, where could New England falter?

One of the best chances for a Pats loss is actually next week’s contest against the 5-2 Ravens in Baltimore. While New England is a four-point favorite, the Ravens have shown their prowess with a 30-16 win over Seattle, and they’ll be coming off a bye week.

That Baltimore game kicks off the toughest part of New England’s schedule in which they’ll then play Philadelphia, Dallas, Houston, and Kansas City.

If the Patriots are going to lose, it’s almost certainly going to happen in one of their next five games.

While the Patriots entered the season as the favorite to remain unbeaten the longest with odds of +800, San Francisco wasn’t even in the top 10. But after their beatdown of Carolina, the 49ers have proven themselves as one of the league’s best.

The offense looks capable behind quarterback Jimmy Garoppolo and a strong rushing tandem of Coleman and Matt Breida. Yet the defense is where this team truly shines.

Allowing just 11 points per game on 254 yards, the San Francisco defense is suffocating at times. Sunday’s game against the Panthers was a perfect example, as defensive end Nick Bosa racked up three sacks and an interception.

While San Francisco has been great all year, it has the displeasure of playing in a strong division and also having a couple of the NFC favorites still on the schedule.

So, while the 49ers could very well be the best team in the conference, a loss could be in the cards when it comes to their Week 10 game against Seattle, or between Weeks 12-14 when San Francisco has three straight contests against Green Bay, Baltimore, and New Orleans.