Brady and New England Smoke Jets; Is This The Best Patriots Team Ever? 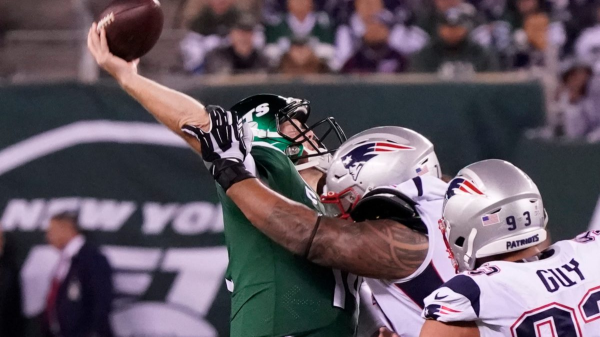 This week’s Monday Night Football contest between the New England Patriots and New York Jets felt like it was over before it started, as New England jumped out to a 17-0 lead in the first quarter and never allowed the Jets back into the game.

The Jets were feeling good coming into the game after Sam Darnold’s return led to a victory over the Dallas Cowboys a week ago. Yet the league’s best defense showed no mercy on the New York quarterback, forcing Darnold to turn the ball over a career-worst five times.

Darnold, who admitted that he was “seeing ghosts” after his third turnover, never got the Jets offense going, as New York was shut out 33-0.
After a promising performance last week, Darnold turned in one of the worst performances in the history of Jets quarterbacks. To earn a dismal 3.6 passer rating, Darnold was 11 of 32 for just 86 yards, zero touchdowns, four interceptions, and one fumble.

As Darnold’s counterpart in the game, Tom Brady threw for 249 yards with a touchdown and a pick.

The New England offense wasn’t dominant, but it didn’t have to be. As the best statistical defense in the league, the Patriots held the Jets to 73 net passing yards and 81 yards on the ground.

As the Pats move to 7-0 on the season, it’s time to start wondering just how good this team is.

While there’s still plenty of football to be played, there’s no denying that New England has yet another special team and looks poised for one more Super Bowl run. And with seven games behind them, we now have a good idea of what this team is.

As we near the halfway point of the NFL season, you’ll find little argument against the sentiment that New England owns the best defense in the league.

Offensively, New England also owns the top-ranked unit when it comes to scoring, with 31.9 points per game. On a yardage basis, the Patriots’ 377 yards per game earn the rank of 10th at this point in the season.

New England may be a defense-first team, but Tom Brady and company are always going to be a threat on Sundays.

Powered by the record-setting combination of Brady and Randy Moss, the 2007 Pats were an offensive juggernaut. With 411 yards per game and 36.8 points per game, New England was far and away the best offensive team in the league that year.

Defensively, the 2007 Pats were fourth with 288 yards allowed per game but finished 29th in scoring defense by allowing 17.1 points per game.

Although the Patriots would eventually fall in the Super Bowl, they broke all sorts of offensive records on the back of Brady’s 50 passing touchdowns and Moss’ 23 touchdown receptions.

What The Odds Say

But is this Pats team better than its 2007 counterpart?

Before the season, the 2019 Patriots were favored in every single game but one – a Week 11 matchup with the Eagles in which Philly was originally favored by one.

While that line is now highly likely to favor New England when game time rolls around, we have the benefit of being able to look back on the 2007 Pats to see they were favored in every game of the regular season and playoffs.

After New England’s ninth game of the 2007 season, they were favored by at least 10.5 points in every single contest, including a 12.5-point line in the Super Bowl and a 22.5-point line against Miami towards the end of the regular season.

Until this 2019 New England team can run the table, it remains impossible to place any Patriots team ahead of that 2007 powerhouse.