49ers Remain Unbeaten, Knocking Off Rams; Are They NFC Favorites? 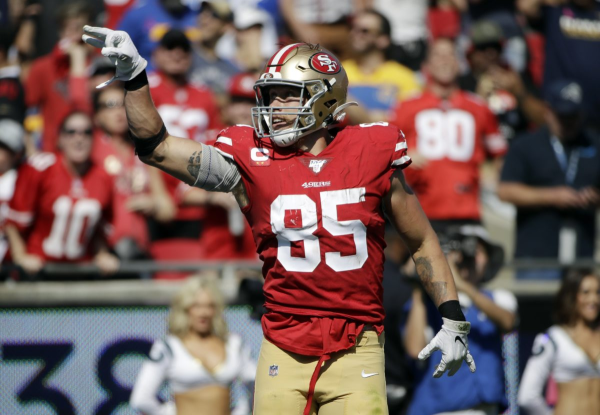 After a flawless 5-0 start to the season, it’s time to take the undefeated San Francisco 49ers seriously. For anyone still casting doubt over the Niners, a comfortable 20-7 win over the defending NFC champion Los Angeles Rams likely changed their tune.

Sure, if you want to call this a fluke start, you can point to the team’s schedule. We now know that Tampa Bay and Cincinnati aren’t world-beaters. But we also know the Rams have plenty of talent on both sides of the ball, and San Francisco looked like the better team throughout.

Los Angeles was playing at home, but the 49ers never really let the crowd get into the game. After a 7-7 first quarter, the Rams never scored again. It was San Francisco that scored 13 points in the final half to put the game away.

It’s worth noting that the 49ers took care of business against Los Angeles without one of their most important offensive pieces, fullback Kyle Juszczyk, who’s out with an injured knee. Yet head coach and play-caller Kyle Shanahan was able to keep his offense in a rhythm and let his defense remain overwhelming.

Quarterback Jimmy Garoppolo finished the game with 243 yards, no touchdowns, and one interception through the air, but also added a touchdown on the ground. Tight end George Kittle caught eight passes for 103 yards as the team’s leading receiver on the day.

Now, the 49ers stand atop the NFL alongside the New England Patriots as one of just two undefeated teams remaining. As the lone undefeated team in their own conference, is it time to start calling San Francisco the favorite in the NFC?

Any detractors of the 49ers can point to Garoppolo’s average play at the QB position as a reason to doubt the team, but there isn’t much else to dislike.

Through five games, Garoppolo has thrown for 1,163 yards, seven touchdowns, and five interceptions while completing 69.9 percent of his passes. Coming off an injury that sidelined him for all of last year, those are decent numbers.

Offensively, San Francisco has a number of weapons, even without a true No. 1 wide receiver. Juszczyk is a Swiss Army Knife in the run and passing games from the fullback position, running backs Matt Breida, Tevin Coleman, and Raheem Mostert offer a three-headed monster, and Kittle is one of the top receiving threats in the NFL.

On the season, Kittle has caught 31 passes for 338 yards and a touchdown. While he isn’t going to rack up the most receiving yards in the league, he’s a mismatch on every play.

Defensively, the 49ers have been great. By allowing just 237 yards and 12.8 points per game, San Francisco is the second-ranked defense in the league, trailing only New England in both categories.

The 49ers have solidified themselves as a contender in the NFC, but are they the team to beat?

Favorites In The NFC

The picture in the AFC is clear: The Patriots (-110) are the clear favorite to win the conference with the Chiefs (+350) trying to catch up and everyone else in the rearview mirror.

In the NFC, the picture isn’t so clear for the conference’s only remaining undefeated squad.

While the path to the playoffs for the 49ers looks clear, the road to the Super Bowl remains clouded.