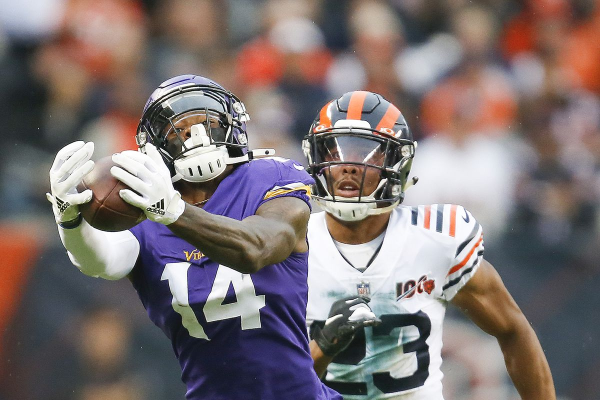 Thursday Night Football pits a matchup of the NFC East vs. the NFC North as the Washington Redskins (1-6) travel to U.S. Bank Stadium to take on the Minnesota Vikings (5-2). These two teams have certainly been heading in different directions, as any playoff chances for the Redskins have already gone by the wayside just seven short games into the season. Meanwhile, the Vikings are rolling and are looking not only for a playoff berth, but to win the NFC North as well. Kickoff for this contest is scheduled for 8:20 pm ET.

For the Washington Redskins, it has certainly not been pretty early on. Their only win of the season was a 17-16 victory over the only team that might be worse than them, the Miami Dolphins. Last week, Washington took a loss against a tough San Francisco 49ers team but managed to keep it close, losing just 9-0. Still, it was sloppy playing conditions last week, and neither team was able to get much going. They will be looking for their second win of the season on Thursday.

The Vikings come into this one just one game behind the division-leading Green Bay Packers and would love an easy win on Thursday followed by some extra time to get ready to travel to face the Chiefs in Week 9. While they have had moments of inconsistency early on, especially with their offense, they have been playing better as of late. Coming into this one, they have won three games in a row.

The Minnesota Vikings come into this as overwhelming 16-point favorites playing at home. The over/under for points scored is set at 42.

On the offensive side, these two teams are pretty opposite of one another. The Minnesota Vikings currently rank sixth in the NFL in points scored, averaging 27.4 points per game (33.3 points at home). The Redskins are 30th overall, averaging just 12.9 points per game (15.7 on the road).

On the defensive side, it is only slightly better. The Vikings rank sixth again, allowing 17.6 points per game to opponents (15.3 points at home). The Redskins come in 21st overall, allowing 25.1 points per game (24 on the road).

Don’t get me wrong, the Washington Redskins have been bad, like, really bad. Despite this, Case Keenum has not been completely atrocious at quarterback. On the season, he is 114 for 172 for 1,213 yards, nine touchdowns and four interceptions. Given the fact that most of those interceptions came in one game, he has really been able to manage the games. Unfortunately, he just hasn’t gotten a whole lot of help from those around him nor his defense.

To exemplify the struggles around Keenum, his leading receiver thus far is the backup running back. Chris Thompson leads the team with 27 catches on the season for 276 yards. To make matters worse for Keenum, Thompson is questionable for the game on Thursday. The most productive receiver, though, has been Terry McLaurin. He has 24 catches for 419 yards and five touchdowns. Still, there hasn’t been a whole lot else behind those two.

On the ground, Adrian Peterson has led the way. This season, he has 83 carries for 307 yards and a touchdown. While this may not be a full-blown revenge game, he obviously would love to do well against his former team.

Steady As She Goes

After being called out by some of his teammates, it appears Kirk Cousins has started to turn around things for the Minnesota Vikings. On the season, he is now 132 for 189 for 1,712 yards, 13 touchdowns and three interceptions. He has been sacked 12 times but has certainly been playing better as of late. Like Peterson, he would probably love to have a nice game against his former team.

Cousins’ leading receiver thus far has been Stefon Diggs. Despite being disgruntled early in the season, Diggs has really come alive. He has 30 catches for 563 yards and four touchdowns. The other main weapon, Adam Thielen, has 27 catches for 391 yards and six touchdowns. Unfortunately for Thielen, though, he has been dealing with a bad hamstring.

On the ground, the leader for the Vikings has been Dalvin Cook. On 133 rushes, he has a whopping 725 yards (5.5 yards per carry) and eight touchdowns. He also has 24 catches for 220 yards through the air.

Taking Washington And The Points

This one has been immensely tough to choose. On the one hand, I do think that the Minnesota Vikings are capable of making this a very lopsided contest, but 16 points is a lot in the NFL to spot another team, no matter how bad they are.

While I think the Vikings offense will still be able to roll, the deciding factor for me was Adam Thielen. Especially knowing that the team probably doesn’t need him to win and can give him extra time to rest, the Vikings have ruled Thielen out for this game. Again, I wouldn’t blame you if you wanted to take the Vikings laying 16, especially since they are playing at home, but for my money, I am taking Washington and the points.