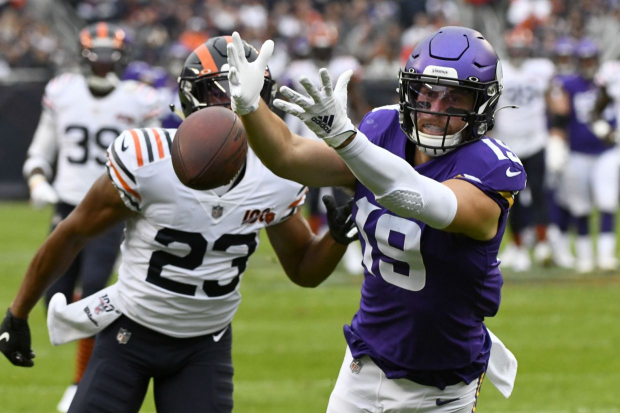 The Minnesota Vikings are 2-2 and sit fourth in the NFC North, quarterback Kirk Cousins has been playing well below his pay level, and now trade rumors are swirling around a very dissatisfied Stefon Diggs.

Although Diggs was present for Thursday’s practice ahead of Sunday’s game against the Giants, the star receiver was missing on Wednesday. Diggs said he was out with a cold, but many believe his absence was due to growing issues between Diggs and the organization.

In interviews, Diggs has remained purposely unclear about the exact sources of his frustration and about rumors that he’d like to be traded.

When asked about whether or not he wants a future away from Minnesota, Diggs said, “There’s truth to all rumors,” and that, “I haven’t communicated anything,” regarding a formal trade request.

The message from Diggs is now a mixed one, as the receiver says he and the team are “trying to work through it,” but also noting that he’s unsure whether or not his agent requested a trade on his behalf.

The Vikings, who signed Diggs to a five-year extension in 2018, have indicated that they have no intention of trading Diggs.

While it’s unclear whether or not Diggs’ dissatisfaction is stemming from more than what’s been happening on the football field, the only remedy may be winning football games. If the Vikings fail to do so, head coach Mike Zimmer could soon find himself without a job.

A Frustrated Offense in Minnesota

In a world where the NFC North isn’t so good, the Vikings may very well be enjoying an easy start to the season with a roster full of content players. We don’t live in that world.

Instead, Minnesota is 2-2 and 0-2 in the division after losses to both Green Bay and Chicago. The Vikings scored a total of 22 points in those two division games.

As it stands, the Vikings are fourth in the division, with the Packers and Bears sitting at 3-1, just ahead of the third-place Lions (2-1-1).

With only 63 points allowed through four weeks of play, it’s fair to say the Minnesota offense is to blame.

It all starts with Cousins. Despite landing a huge deal and running an offense full of weapons – Diggs, Adam Thielen, Dalvin Cook – Cousins has been an average or worse quarterback through the first quarter of the season.

Cousins is currently 64 of 99 for 735 yards with three touchdowns and two interceptions. It’s unclear whether the Vikings’ new run-first approach is because of Cousins’ lack of production or causing it.

While running back Cook (410 yards, five touchdowns) has looked impressive, receivers Diggs and Theilen haven’t enjoyed the same success of years past. Right now, Diggs has caught 13 balls for 209 yards and a touchdown, and Theilen has reeled in 13 passes for 179 yards and two TDs.

With a defense that hasn’t allowed more than 21 points in any contest, an improved offense would surely make the Vikings a threat in the NFC and could secure Zimmer’s job. But how likely is that?

Odds for the Minnesota Vikings

At the moment, the NFC North looks like a battle between two teams with the Vikings trailing behind and the Lions playing the role of longshot. With identical 3-1 records, the Packers and Bears are the top dogs.

With +155 odds to win the division, Green Bay is edging out Chicago (+160) right now. Behind that duo is where you’ll find Minnesota and its +375 odds. And with +875 odds, Detroit rounds out the NFC North.

Although the Vikings may very well be one of the best teams in the NFC, a tough division and a slow start has them looking up at a number of good (but perhaps not great) teams in the conference.

The Vikings are on the outside looking in, and a year without playoff football might end with Zimmer looking for a new gig. However, if Minnesota can hang on to Diggs and get significant improvement out of the offense, this Vikings squad has a chance to make plenty of noise in the NFC.