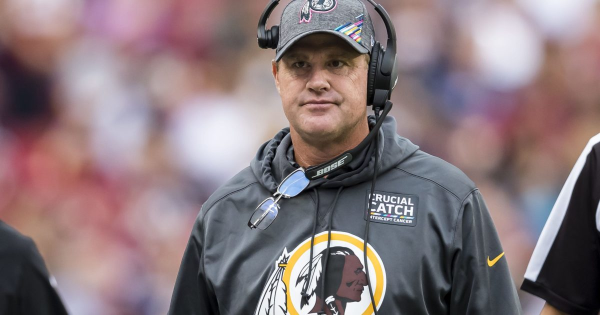 It’s a sad inevitability in the NFL that at least one head coach is destined to be fired during the season every year. This season, the first casualty is Jay Gruden, who was just sacked on the back of a 33-7 loss to the New England Patriots on Sunday to cap off an 0-5 start.
With Gruden no longer in charge after six seasons with the team, Washington will turn the squad over to offensive line coach Bill Callahan as interim head coach.

After signing a two-year extension during the 2016 offseason, Gruden is still owed $5 million in 2020, the last year remaining on his contract. Through five-plus years in Washington, Gruden had a record of 35-49-1.

Redskins owner Dan Snyder has now fired five coaches in his 20 years in charge of the team. Both Joe Gibbs and Steve Spurrier resigned. If Gruden wants to find a silver lining, he can point to the fact that he lasted longer than any other coach Snyder has hired, with no other coach making it more than four years.

And since Gruden became the first NFL head coach to be fired in 2019, it’s time for anyone who gambled on that possibility to cash in.

Let’s see where it all went wrong for Gruden before finding out how much you made if you picked Gruden to be the first casualty of the 2019 season.

Halfway through the 2018 regular season, the Redskins were sitting pretty. After starting 6-3 with their sights set on playoff football, the Redskins suffered a fatal blow when quarterback Alex Smith broke his leg.

Three other quarterbacks would start throughout the remainder of the season as the Redskins finished 7-9, missing the playoffs yet again. Snyder gave Gruden another chance heading into 2019, but it was a chance that would only last five games.

And so, Gruden joins Mike Shanahan, Jim Zorn, Marty Schottenheimer, and Norv Turner as the fifth coach to be fired by Snyder in Washington.

Although Gruden would reach at least seven wins in all but one of his five full seasons in charge of the Redskins, the team made just one playoff appearance and failed to win a playoff game under Gruden.

Now, with Philadelphia and Dallas leading the way in the NFC East and even the lowly Giants having more success than the Redskins, the table is set for drastic change in Washington.

We’ll have to see whether or not the interim title for Callahan will turn into a permanent coaching role, but it’s likely that the fate of whoever the next head coach of the Redskins is will be tied to rookie quarterback Dwayne Haskins.

And if you saw this coming, you turned all of Washington’s turmoil into a nice payday for yourself.

With Gruden Out, Cash In

One of the more cynical prop bets you could’ve gambled on at the start of the 2019 NFL season was which coach was set to be fired first. After just one week of play, the odds on Gruden being the first casualty of the season were at +450, behind only Dan Quinn’s +250 odds.

And after a dismal first quarter of the season that included a 24-3 loss to the Giants, Gruden became the odds-on favorite to be the first head coach to be fired coming into Week 5 with -125 odds.

With Quinn and Bill O’Brien next on the chopping block with +500 odds, it appears Gruden was the frontrunner for very good reason.

So, whether you placed your bet on Gruden’s firing at the start of the season or before Sunday’s game, it’s time to cash in.