Le’Veon Bell Wants The Ball, And He Wants It A Lot; Can He Lead Jets… 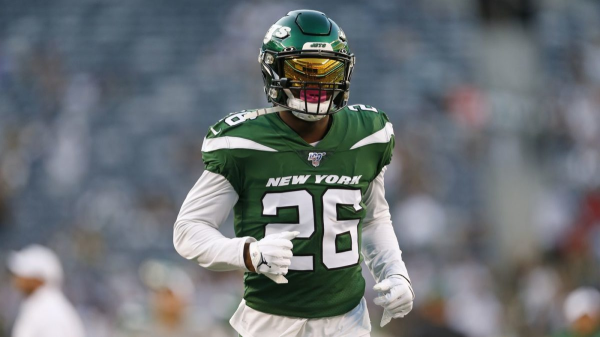 After taking a full season off from the game of football, new Jets running back Le’Veon Bell has fresh legs. According to Bell himself, he’s ready to use them.

After a Wednesday practice, Bell made himself perfectly clear when he said, “I can carry 50 (times) if you ask me. When I say, ‘Don’t hold back,’ I mean literally that.”

Bell sounds like a man itching for competitive football after a 20-month layoff, and that’s exactly what the Jets will want to hear out of their prized free-agent signing from this offseason. As the 2019 football season kicks off, Bell seems eager to prove he’s still one of the best running backs in the NFL.

He’ll have a great chance to start the season with a bang when the Jets host the Bills in Week 1. Bell’s most recent game against Buffalo came in 2016, when he rushed for three touchdowns on 236 yards and added 62 yards receiving.

So, should the Jets feed the ball to Bell after signing him to a four-year, $52.5 million deal? And if they do, can Bell lead the Jets to the playoffs?

What Bell Brings to the Jets

In his five seasons with Pittsburgh before his contract dispute in 2018, Bell turned himself into one of the best weapons in football. Bell was a Pro Bowl player in 2016 and earned both Pro Bowl and First-Team All-Pro honors in 2014 and 2017.

Bell was a key player for a Steelers team that was a perennial contender throughout his time with the team. Among players with at least 50 games played, Bell’s average of 129 yards from scrimmage per game in his five seasons with Pittsburgh is the highest in NFL history.

We’ll have to see if Bell and his fresh legs will be enough to lead New York to a playoff berth.

Under former head coach Todd Bowles, the Jets completed the 2018 season with a record of 4-12 and in last place in the AFC East. In their 16-game schedule, a Jets running back topped 100 yards on only two occasions.

With the addition of Bell to the roster, the 2019 Jets figure to improve in both regards.

As an offense, the Jets finished 29th in the league with 299 yards per game. If Bell can provide his 129 yards from scrimmage, that number should improve significantly, too.

Yet Bell’s most vital contribution could be in the form of relieving pressure from second-year quarterback Sam Darnold. After showing flashes of good QB play a season ago, Darnold will need to take a large step forward if playoff football is in the Jets’ future.

In his rookie campaign, Darnold threw for 2,865 yards, 17 touchdowns, and 15 interceptions while completing 58 percent of his passes. With the addition of an effective running game, the passing game will have a chance for much-needed improvement.

Odds For A Jets Playoff Berth

The good news for the Jets is that their +600 odds to win the AFC East are better than that of the Bills (+950) and Dolphins (+2500). The bad news, however, is that New York is still far behind the division favorite Patriots at -500.

So, it appears the Jets’ best shot at reaching playoff football would come in the form of a Wild Card berth. And with multiple teams in line for a winning record in the AFC South, North, and West, that could be a tall task.

After a four-win season in 2018, the over/under line on total wins for the Jets in 2019 is set at 7.5. That number is level with the Colts and puts New York behind Tennessee, Houston, Baltimore, Pittsburgh, Cleveland, Los Angeles, Kansas City, and New England – that’s eight AFC teams, not including Indianapolis.

If Bell leads the Jets to the playoffs in 2019, it will take a heroic individual effort and gigantic leap for New York.