Bell Talks Big Game, But Can He Lead Jets to Playoffs in 2019? 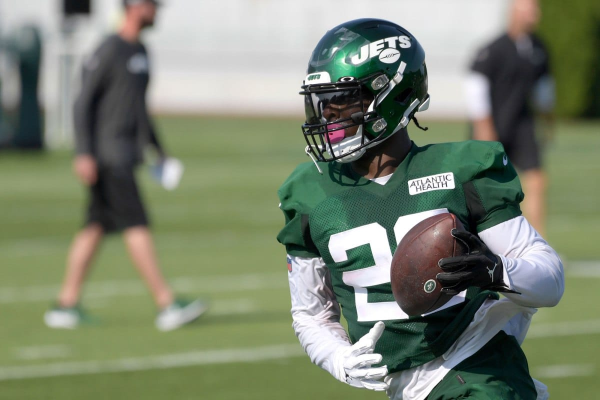 One of the biggest moves of the NFL offseason was the addition of Le’Veon Bell to the New York Jets. The three-time Pro Bowler was able to sign as a free agent after sitting out last season with the Pittsburgh Steelers on the back of a contract dispute.

Bell is widely considered one of the league’s best running backs despite a full year away from the game and was certainly one of the most used. In 2017, Bell had 406 touches for the Steelers, leading the NFL.

As far as fantasy football is concerned, Bell, who was a top pick for owners last year, has apologized to those who picked him.

In a recent Tweet, the Jets new running back said, “This is loooong overdue!! but I want to take a moment to apologize to all the fantasy owners who picked me last year, I’m sorry I couldn’t pull through for y’ all…but trust me, this year’s about to be wayyyy different, I’m bringing the [trophy emoji] [trophy emoji] this year.”

That wasn’t all Bell had to say recently. The star back also noted how refreshed he’s feeling, noting that he isn’t afraid of a large workload, “I’m up for 500 [touches] if it’s going to take us to a Super Bowl.”

The Lombardi Trophy might be at the forefront of Bell’s mind, but he’ll have to get the Jets to the playoffs first.

Can the Jets Reach the Playoffs?

With that sort of foundation, it will take a huge leap to bring New York from a bottom-five team to the playoffs. And considering their inter-division competition, most notably New England, it’s hard to see the Jets making playoff football outside of a wild card spot.

Yet Vegas doesn’t see New York as the bottom team in the AFC East coming into this season. Although the Patriots are a heavy favorite to win the division at -500 odds, the Jets are the second favorite at +600, ahead of the Bills (+950) and Dolphins (+2500).

The Potential for a Wild Card Playoff Berth

The Jets certainly aren’t the same team they were last year, and the addition of Bell spearheads that reality. None of New York’s running backs even sniffed 1,000 rushing yards last season, with Isaiah Crowell’s 685 yards and Bilal Powell’s 343 yards leading the way.

In addition to the obvious upgrade at running back, we should expect Bell’s introduction to take some pressure off second-year quarterback Sam Darnold. In his rookie campaign, Darnold threw for 2,865 yards with 17 touchdowns and 15 interceptions in 13 games.

Darnold showed promise as a young quarterback, and a stronger running game could do wonders for New York’s offense in 2019.

But, while the offense stands to improve, will it be enough to sneak the Jets into a wild card position? As far as the odds are concerned, it’s a long shot.

Although the Jets are slotted to jump into second in the AFC East, we’re talking about a weak division overall. In the AFC, the Jets are still in the bottom half. Right now, New York is sitting on +4000 odds to win the conference.

Finding their way into the playoffs is a very tall task for a growing Jets squad in a tough conference. In addition to the AFC favorite Patriots and Chiefs, it’s hard to see more than one 2018 playoff team making way.

The Chargers, Colts, and Texans are poised to play beyond the regular season once again, while the AFC North has three playoff candidates in the Browns, Steelers, and Ravens (2018 AFC North champs).

So, while Bell should be confident in his own abilities and can hope for an improvement for the Jets, don’t expect New York to make the playoffs just yet.