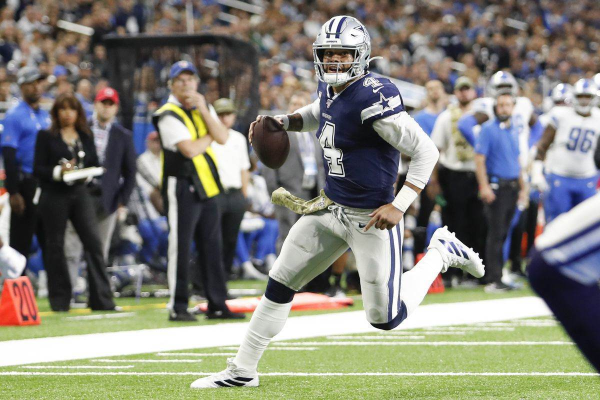 Both the Dallas Cowboys and Philadelphia Eagles entered Week 11 of the NFL season with identical 5-4 overall records. With Philadelphia facing off against New England and Dallas going up against Detroit, the Cowboys needed to take advantage of one of their few remaining games against a team below .500.

It wasn’t pretty, but Dallas got the job done. Another slow start for the Cowboys allowed the Lions to jump out to 7-0 and 10-7 leads in the first half of play, but Dallas used a three-touchdown second quarter to surge past Detroit and earn a lead it would never relinquish.

Although the Cowboys allowed 27 points on 312 yards, they were able to earn their third road win of the season on the back of a 35-point, 509-yard offensive performance.

Overcoming an early fumble by Ezekiel Elliott, Dak Prescott led the Cowboys with 444 yards, three TDs, and no picks. Michael Gallup caught nine balls for 148 yards, while Randall Cobb added on another 115 yards and a touchdown.

Dallas needed this win badly for two reasons. First, the Cowboys have one of the toughest remaining schedules in the NFL. Second, a Philadelphia loss to New England would give Dallas the lead in the NFC East.

After the Eagles jumped out to a 10-point lead at home, the above result looked unlikely. However, the dominant Patriots defense eventually showed up and shut out the Eagles through the better part of three quarters while scoring 17 unanswered points.

Easier Road To The Postseason

It’s fair to say that the Cowboys have been better than the Eagles this season. On top of earning a better record and a much better point differential (+89 to +4), Dallas defeated Philadelphia 37-10 in their head-to-head matchup.

However, the path to the playoffs appears much more difficult for the Cowboys.

Of Dallas’ six remaining games, only two will come against teams with a record below .500. Still on the schedule are the Patriots, Bills, Rams, and Eagles (Week 16).

Collectively, the opponents Dallas will face over the final six weeks of the season are a combined 32-28.

Philly’s loss to New England brings it down to 5-5 on the season, but the Eagles should be favored in the majority of their remaining games.

Only Seattle and Dallas own winning records on the remaining schedule of Philadelphia, and the Eagles have the pleasure of playing Miami, Washington, and the Giants twice.

Collectively, the opponents Philadelphia will face over the final six weeks are a combined 19-31 (it plays the 2-8 Giants twice).

Which Team Earns A Playoff Berth?

With the 8-2 Seahawks and 8-3 Vikings in control of the two Wild Card spots, it’s highly likely that the only way into the postseason for either the Cowboys or Eagles would be via a division championship.

An NFC East race that looks tight on paper is also tight when looking at the odds. With odds of -170 to win the division, the Cowboys are the favorite right now. The Eagles are close behind with odds of +110.

Alongside a one-game lead, the biggest reason for Dallas holding better odds is the fact that the Cowboys have a perfect 4-0 record in the division compared to Philly’s 1-1 record in the NFC East.

However, the Eagles actually had better odds of making the playoffs entering this past weekend. Before playing New England, Philadelphia was a -180 favorite to reach the postseason while the Cowboys were sitting on -120 odds.

Much of Dallas’ season could come down to a span of five days in which they play the Patriots next Sunday and the Bills on Thanksgiving.