Vikings Come from Behind for Huge NFC Win 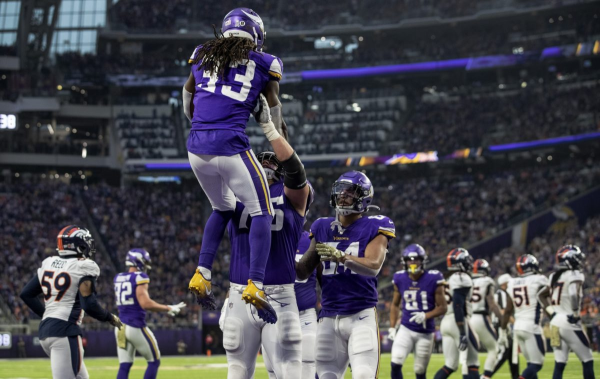 When the Minnesota Vikings went into the locker room for halftime with a 20-point deficit at home to the Denver Broncos on Sunday, fans around the league took notice that one of the more shocking upsets of the season was in the cards. Minnesota was a 10-point favorite at home, after all.

At the break, quarterback Kirk Cousins and the rest of the Vikings squad didn’t have to be reminded of what was at stake. A loss to Denver would have not only given Green Bay some breathing room in the NFC North, but it would have invited a slew of teams into the NFC Wild Card race.

With their four second-half possessions resulting in four touchdowns, Minnesota erased that 20-point deficit in two quarters while holding Denver to just three second-half points. In the final seconds of the contest, the Vikings forced three incompletions in the end zone to earn the victory.

Cousins completed 29 of his 35 attempts, throwing for 319 yards with three touchdowns and no interceptions. His two most important touchdowns of the day included a 54-yard strike to Stefon Diggs to cut the deficit to three, and then a 32-yard, game-winning touchdown to Kyle Rudolph with about six minutes to play.

After a disastrous first half, Minnesota erupted and showed us why they’re one of the most complete teams in football. For their efforts, the Vikings improved to 8-3 on the season with the 27-23 win.

Minnesota’s Path To The Playoffs

With Sunday’s come-from-behind victory, the Vikings have now won two straight and six of their last seven. Now, Minnesota has a couple of avenues to postseason football.

In the NFC North, what first appeared to be a three-team race has been whittled down to just two: Green Bay and Minnesota.

With the Packers on a bye week, the Vikings were given the opportunity to put pressure on their division rivals, and they took it.

For now, Green Bay remains atop the NFC North with a record of 8-2, while 8-3 Minnesota is breathing down its neck. The Vikings won’t take the field again until December with a bye week coming up, so a Packers loss to the 49ers next week would give these two NFC North leaders identical records.

However, despite owning a better point differential, the +84 Vikings are just 1-2 in the division, while the +45 Packers are a perfect 3-0.

Minnesota’s other path to the playoffs would be a Wild Card berth, and this appears to be a virtual lock. Assuming the current division leaders end up that way, the 8-3 Vikings and 8-2 Seahawks don’t appear to have much competition for the two extra playoff spots.

The 6-4 Rams are the closest team, and they still have to play Baltimore, Seattle, Dallas, and San Francisco over their final six games.

Are The Vikings A Postseason Lock?

Although the Vikings have a shot at the NFC North title and it feels like a Wild Card berth is a relatively certain backup plan, are the odds telling us that a Vikings playoff appearance is a lock? And what chance does Minnesota have of winning it all?

In the division, a two-team race is led by the -195 Packers. The Vikings trail close behind with odds of +130.

And when it comes to winning the Lombardi Trophy, Minnesota currently owns the eighth-best odds in the NFL at +1600, putting it well behind the +240 odds of New England.