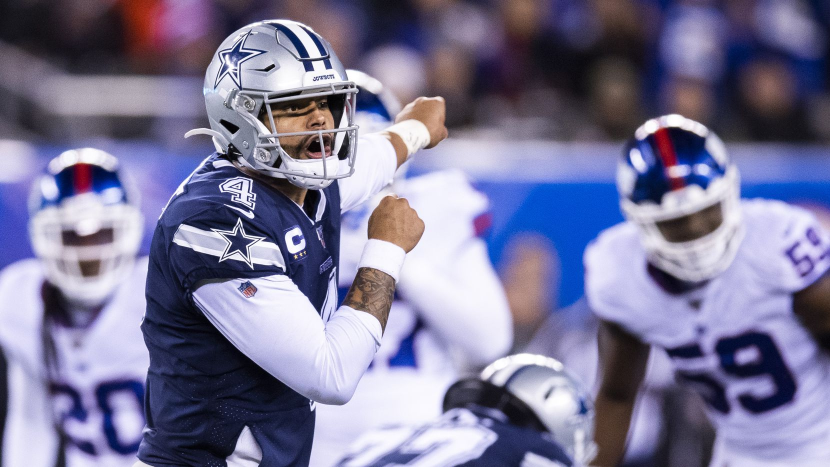 Any given NFL season provides us with one or two teams that we simply can’t figure out. This year, one of those enigma teams has been the Dallas Cowboys, who entered the season with Super Bowl aspirations but hit a three-game skid to bring them down to .500.

So, when the Cowboys went on the road to play their NFC East rivals in New York on Monday night, we knew we’d get a hint as to whether this Dallas team is a contender or pretender.

Starting with a Dak Prescott interception on the first play from scrimmage, the Cowboys appeared more like the latter throughout most of the first half as they allowed the two-win Giants to run up a 12-3 lead. The Cowboys were coughing up the football and falling short on third down.

Then it all changed after a black cat ran across the field, halting play for a minute or so.

From that point on, the game was virtually all Dallas. Aided by a Daniel Jones interception, the Cowboys scored 10 points in the final minute of the first half to flip the game on its head, and then they continued to pound the Giants with a bludgeoning run game and a swarming defense.

Capping the game with a 17-point fourth quarter that included a 45-yard touchdown catch by Amari Cooper, the Cowboys were led to victory on the back of Prescott’s 257 yards and three TDs with one pick.

So, do the Cowboys have what it takes to contend for an NFC title? And should the Giants be in the discussion for the race for the first overall draft pick?

The NFC East is a scrappy division with a lot of history between its four teams, but this year is a case of the haves and have-nots. While the 5-3 Cowboys and 5-4 Eagles are trending one way, the 2-7 Giants and 1-8 Redskins are trending in another.

Let’s start with Dallas, for whom owner Jerry Jones has been on record saying this is a Super Bowl-caliber team. They sure looked that way with a 3-0 start, but quickly lost all their luster with three straight losses to move to 3-3.

After taking down both Philly and the Giants, Dallas now sits in first place in the NFC East with a 4-0 division record, but do they have enough to compete with the top teams in the conference?

Defensively, the Cowboys feature some of the best linebackers in the league, starting with Jaylon Smith, and a vicious pass rush that includes DeMarcus Lawrence and Robert Quinn.

The question for Dallas is whether or not it can put it all together against the best competition and compete for the NFC championship.

According to the odds, they can.

We’ll soon find out a lot more about the Cowboys as they now play host to Minnesota before road games against Detroit and New England.

Can The Giants Land The No. 1 Pick?

At this point in the football season, Alabama quarterback Tua Tagovailoa remains the favorite to be the first overall NFL draft pick in 2020 with -150 odds. No matter who goes first, do the Giants have a chance of falling into that selection?

At 2-7, the Giants are one of eight teams with two wins or fewer at the halfway point of the NFL season. At 0-8, the Bengals lead the charge towards the top draft pick, but that doesn’t mean it’s set in stone.

If the season were to end today, the Giants would end up with the No. 6 pick in the 2020 draft. That would be the highest pick among two-win teams.

Although New York has more talent than, say, the Bengals or Dolphins, the Giants could find themselves slipping closer to that top pick if rookie QB Daniel Jones continues to struggle.