Chiefs Pick Up Big Monday Night Football Win, Still Have Work To Do 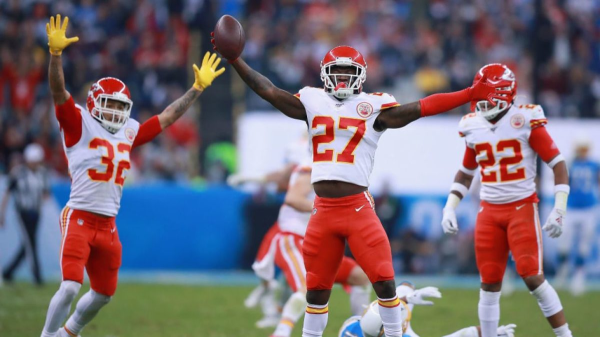 Monday Night Football boiled down to what just about every game throughout Philip Rivers’ career boils down to: The Chargers were down seven points late in the fourth quarter with one last chance to score. With Rivers’ fourth interception of the game, this time in the red zone, Kansas City defeated Los Angeles in a 24-17 game in Mexico City.

It’s at this point in the season when the NFL starts giving us really meaningful games in one way or another. Monday evening was one of those occasions.

For Los Angeles, the stakes were simple. At 4-6, another loss would effectively knock them out of the playoff hunt, but an upset victory could save the season.

It wasn’t so simple for Kansas City. Coming into the contest, the Chiefs had dropped four of their last six, only one loss of which came without Patrick Mahomes on the field. Another defeat would have dropped Kansas City below the Raiders in the AFC West with a head-to-head clash coming on Dec. 1.

In the end, the Chiefs did enough to earn a victory in the Estadio Azteca, but they once again showed a vulnerability that wasn’t present with last year’s team.

Tyreek Hill left the game early on, but that’s hardly an excuse for the reigning MVP to throw for just 182 yards with a TD and a pick on a 19-for-32 performance. And a Kansas City offense that expects to light up the scoreboard managed just a seven-point win over the Chargers despite picking off Rivers four times.

The Chiefs avoided catastrophe, but they don’t look as formidable as they did a year ago.

What’s Next For Kansas City

Coming into the year, we expected the Chiefs and this high-powered offense to challenge for the AFC Championship once again. In fact, Kansas City started the season as co-favorites to win the Super Bowl alongside New England. While the Pats held odds of +400 to win it all, the Chiefs were just behind with odds of +600.

Yet Mahomes hasn’t been the same invincible player, albeit with a dislocated knee suffered just weeks ago, and Kansas City no longer feels like a favorite to hoist the Lombardi Trophy at the season’s end.

In fact, Kansas City needs to be much more worried about the next few weeks of the season if they want to even give themselves a shot at doing something in the playoffs.

With the big win on Monday Night Football, the Chiefs are now 7-4 with a small lead over the 6-4 Raiders. While Oakland is taking on the Jets next week, Kansas City will be at home enjoying its bye week.

Then things get very interesting.

Both the Chiefs and Raiders are likely to be at 7-4 when they go into a division showdown against one another in Kansas City on Dec. 1. A win for Kansas City would give it a 4-0 record in the division and a clear path to becoming AFC West champs. A win for Oakland would put the Raiders ahead on overall record and even with a division record of 3-1.

Then, while the Raiders face remaining games against the Titans, Jaguars, Chargers, and Broncos, the Chiefs would be heading into a clash with the Patriots in Foxborough.

So, the AFC crown is far from being decided at this point in the season. And with seven teams currently sitting on six wins or more and nine teams with five wins or more in the AFC, there’s no guarantee that Kansas City earns postseason football this year.

Do The Odds Expect A Kansas City Playoff Berth?

With the loss on Monday night, the Chargers are now just 4-7 and don’t appear like they’ll figure into the AFC West race. That leaves us with a two-team battle between Kansas City and Oakland.

Although the Chiefs will likely enter a showdown with the Raiders with an identical overall record, Kansas City is still a significant favorite to win the division with odds of -400. The Raiders remain a dog with +310 odds to win the AFC West.

Despite showing their shortcomings, the Chiefs remain a Super Bowl threat according to the odds, as well.