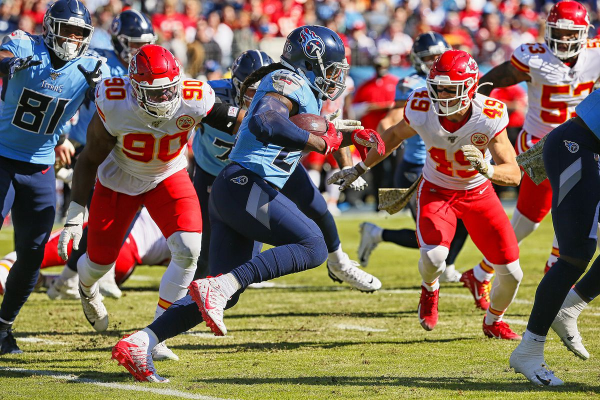 It was only a few weeks ago that Chiefs quarterback Patrick Mahomes was writhing around on the ground with a dislocated knee, unsure of whether or not his season was over. So, as the reigning MVP returned just three weeks later for a game against Tennessee, the stage was set for Mahomes to play the part of conquering hero.

Except the Titans didn’t care who was playing quarterback for Kansas City.

Despite Mahomes’ 446 yards and three touchdowns, Tennessee did just enough to overcome a 10-0 start and a nine-point deficit in the fourth quarter on its way to a 35-32 upset over the Chiefs.

The end result was fairly shocking, not just because the Titans entered the game with a losing record and were going up against one of the favorites in the AFC. This was also a stunning loss for Kansas City because they appeared to dominate the game.

The big advantage for Tennessee was the running game, which racked up 225 yards compared to Kansas City’s 97. With 23 carries for 188 yards and two TDs, Derrick Henry led the way to victory for the Titans.

While the Chiefs now slip to 6-4 with their first road loss of the season, the Titans have moved to 5-5 in a division that looks wide open.

Everyone Has A Shot

Tennessee has once again regained a .500 record, and they had to take down Mahomes and the Chiefs to do it. And so, the AFC South has become even more convoluted than usual.

With a record of 6-3, the Houston Texans have earned the top spot in the division on the back of a +47 point differential. Behind Deshaun Watson’s 2,432 yards and 18 touchdowns, Houston has won four of its last five and is set for a showdown with Baltimore next week.

The Indianapolis Colts are now 5-4 after a relatively shocking defeat to Miami with starting quarterback Jacoby Brissett unable to play. The Colts had an impressive stretch of back-to-back wins over Kansas City and Houston, which is why Indianapolis’ 2-0 division record is better than the Texans’ 2-1 division record.

The Titans are slotted in the third spot within the AFC South with their 5-5 record. Tennessee will hope to gain some momentum as winners of three of their last four. With two games against the Texans in the final three weeks of the season, this division could come down to the wire.

With Nick Foles returning from injury, the Jacksonville Jaguars round out the division with their record of 4-5. The Jags have the only negative point differential and sub-.500 record in the AFC South, but they’re still just two wins below the first-place Texans.

The Jaguars will face Indianapolis and then Tennessee directly after the Titans’ bye, so we’ll likely find out whether or not Jacksonville has a real shot at the division very soon.

Who Will Finish On Top?

Although the Texans have a ton of talent and the division lead, they’re still struggling to protect Watson and will be without J.J. Watt for the remainder of the season. So, it’s fair to say the AFC South is very much up for grabs.

For now, Houston remains the favorite to win the division with -155 odds. Although the offensive line is suspect, Watson has been able to get out of trouble and make plays to the likes of DeAndre Hopkins, so this comes as no surprise.

The Colts obviously took a step back with a bad loss to the Dolphins, but they were without their starting quarterback. At this point, Indianapolis is sitting the second-best odds of +280 to win the AFC South.

With their upset of Kansas City, the Titans have kept themselves in the division race. Now, their +550 odds rank third within the division.

Finally, the Jaguars are currently holding +1100 odds to win the AFC South, which is easily the best odds for any team currently in last place of their respective division. If Jacksonville can go 2-0 against the Colts and Titans in its next two games, expect these odds to be cut in half.