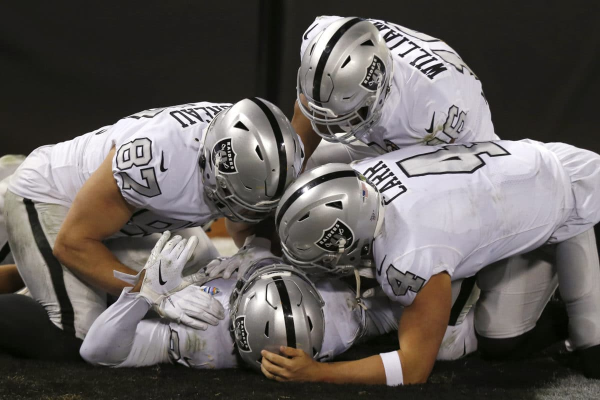 When the Oakland Raiders and Los Angeles Chargers stepped on the field for Thursday Night Football, they were playing for more than just a single win or loss. The winner would give themselves a great chance of competing for an AFC Wild Card berth down the stretch, and the loser would dig themselves a hole they may never crawl out of.

The contest played very much like there was that significance at stake, as the score remained close throughout the ballgame. In the end, Oakland running back Josh Jacobs turned a 3rd-and-1 handoff into an 18-yard, game-winning touchdown run with a minute left to play, earning the Raiders a 26-24 victory.

Oakland sprinted out to a 10-0 lead in the first quarter, but Los Angeles roared back and took a 14-10 lead in the second quarter. The teams then traded field goals until a six-yard touchdown pass from Philip Rivers to Austin Ekeler gave the Chargers a four-point lead with four minutes remaining.

It was up to Derek Carr to lead the Raiders on a game-winning drive, and he did just that. After Jacobs’ game-winning run, Oakland sealed the game by picking off Rivers for the third time in the contest.

With this victory, Jon Gruden’s Raiders moved to 5-4 and just one game back of the division-leading Chiefs. The Chargers now find themselves at 4-6, with their season all but lost.

Oakland felt like a clown show at the beginning of the season. Yet all the Antonio Brown distractions and Gruden jokes haven’t kept the Raiders from earning a winning record through nine games of the season.

Now, it’s time to focus on the run to the playoffs.

With the win over the Chargers, Oakland has moved into seventh in the AFC. That puts Gruden’s men just behind the four division leaders and two current Wild Card holders, and just ahead of the group of four-win teams.

Sitting at 4-4, the Steelers are the only four-win team that can match Oakland’s record with a win this weekend, but Pittsburgh will be facing a solid Rams team that’s favored by four points at the moment.

The bad news for the Raiders in their quest for playoff football is that they’ll need to find a way to either overcome Kansas City to win the AFC West or move ahead of either the 6-2 Bills or 5-3 Colts to get themselves into a Wild Card position.

The good news for Gruden, Carr, and company is that Oakland has perhaps the easiest remaining schedule in the league. Of their seven remaining games, only the Chiefs have a winning record.

Oakland’s next two opponents – the Bengals and Jets – are a combined 1-15. Overall, the opponents remaining on the Raiders’ schedule have a collective record of 22-40.

So, as the Raiders are likely to jump out to a 7-4 record over the next two weeks, expect the Oakland playoff talk to get louder.

Could Oakland Make A Run At The AFC Championship?

The Raiders are one of the NFL’s most interesting teams. Despite having a winning record, Oakland owns a -32 point differential.

Yet they’ve put themselves in a great position to earn a playoff berth. If they reach postseason football, does this team have what it takes to win the conference?

Much of that question comes down to Carr, who’s been playing well, with a 70.8 percent completion rate on his way to 2,202 yards with 14 touchdowns and just four picks.

That’s part of the reason why Oakland is still a longshot to win the AFC with odds of +3000, which slots it behind +2800 Pittsburgh. With the Patriots sitting at -115 odds to win the conference, Oakland still feels like it doesn’t stand a chance with the eighth-best odds in the AFC.