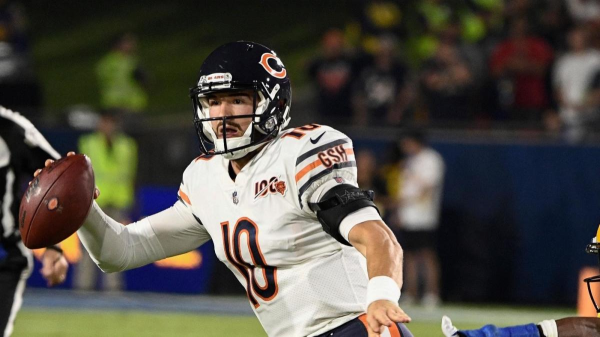 Thanksgiving Day features an NFC North showdown as the Chicago Bears (5-6) travel to Ford Field to take on the Detroit Lions (3-7-1). For both of these teams, it has been a dismal season. While technically the Bears could make a run at a playoff spot, at 5-6 and three games behind two different teams in the NFC North (Packers and Vikings), playoff hopes are all but dead for the Bears.

For the Lions, those dreams went out a while ago. Still, this one is for bragging rights. As both teams combat a short week of practice ahead of this one, both will be looking to pull off the Thanksgiving win. Kickoff for this one is scheduled for 12:30 pm ET.

The Bears have won just two out of their last seven games. They did beat the New York Giants last week but only managed to put up 19 points in the 19-14 victory and certainly looked less than impressive. Three weeks ago, the Bears beat these same Lions at home 20-13 (the first game without Matthew Stafford). The Bears will look to duplicate that success and try to pick up another victory Thursday.

For the Lions, it has been rough sledding of late. They have lost four in a row heading into Thanksgiving. Last Sunday, they lost to the Washington Redskins 19-16, but the week prior to that, they at least gave a decent team a fight as they lost to the Dallas Cowboys 35-27 at home. Trying to end their losing streak, the Lions will look to split the season series with the Bears Thursday.

The Bears come into this one as 2.5-point favorites despite playing on the road. The over/under for total points scored currently sits at 39.

On the offensive side, the Detroit Lions actually rank 12th in the league in points scored, averaging 23.6 points per game (26.2 at home). Granted, their offense has taken a hit with the Stafford injury, but it is worth noting they do play better at home. The Bears come in 28th overall, averaging a dismal 17.1 points per game (17.8 on the road).

On the defensive side, it is the Bears that come in as the far superior team. They currently rank fourth overall in terms of points allowed at 17.1 per game (18.4 on the road). The Lions rank 25th, allowing an average of 26.5 points per game (29.4 at home).

Bears Looking For Signs Of Life

If you are a Chicago Bears fan, it is hard to watch the likes of Lamar Jackson, Patrick Mahomes and DeShaun Watson having success given that you passed on all of them to take Mitchell Trubisky. Still, the organization can not revise history, and the Bears are trying to get what they can out of their quarterback. On the season, he has thrown for 1,858 yards, 10 touchdowns and six interceptions. He has also been sacked 25 times to date.

On the ground, it is David Montgomery leading the way, rushing 156 times for 519 yards and five touchdowns. Montgomery also has 21 catches out of the backfield for 161 yards.

With Matthew Stafford out, the Detroit Lions have had to turn to Jeff Driskel to take over under center. On the season, Driskel is 62 for 105 for 685 yards passing. He also has four touchdowns and four interceptions and has been sacked 11 times in that span, though he may have a hamstring problem that keeps him out of this one.

With leading rusher Kerryon Johnson also out, that leaves Bo Scarbrough, who has 32 rushes for 153 yards and a touchdown.

This one is pretty brutal in terms of picking. Both offenses have been horrendous of late, and neither team has had much success. Still, the Bears’ defense, while having taken a step back from last year, is still playing pretty well. While I don’t trust Trubisky on offense, I do trust that the Bears defense will make it a long day for Driskel (or whoever is under center) and the Lions’ offense. The Bears could use some turnovers and possibly even a defensive score to help, but I still like Chicago’s chances laying 2.5 points over that of the Lions, even if they are playing at home.