Seahawks Down Eagles, Continue To Impress Under The Radar 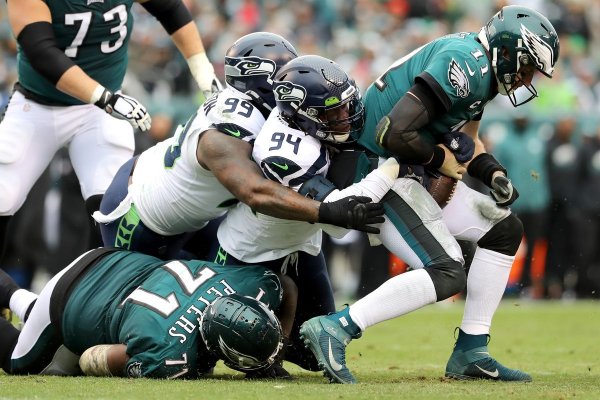 After the 49ers’ demolition of the Green Bay Packers on Sunday Night Football, the spotlight within the NFC West continues to be fixed upon San Francisco. However, the Seattle Seahawks may very well be the best team in the division.

To improve their away record to 6-0, the Seahawks had to fly across the country and go into Philadelphia. While Seattle has normally counted on its offense to win games, it was the defense that stepped up to hold the Eagles to just nine points.

Russell Wilson managed only 200 yards with a touchdown and an interception, and his leading receiver was Tyler Lockett, who racked up only 38 receiving yards. Rashaad Penny had the play of the game with a 58-yard TD run as part of his 129-yard day.

Perhaps more impressively, the Seattle defense forced four fumbles on the day, three of which they recovered to flip field position or set up scores. And with eight tackles for a loss, the visitors looked like the Seahawks of old on Sunday afternoon.

With the 17-9 win, Seattle improved to 9-2 on the season and figures to be an NFC favorite even if it isn’t able to catch San Francisco in the division.

After narrowly edging out Cincinnati and Pittsburgh and losing to New Orleans to start the season, the Seahawks felt like a team barely held together by MVP candidate Russell Wilson.

Two months later, Seattle would be considered a threat to any team in the NFC.

With their two losses coming to two of the league’s best teams, the Saints and Ravens, the Seahawks can boast big wins over the Rams, 49ers, and now Eagles. That win against San Francisco was on the road and handed the NFC leaders their first and only loss of the season.

Much of Seattle’s success has come from the performance of Wilson, who’s thrown for 300 yards or more on three occasions. In total, Wilson has completed 67.3 percent of his passes for 2,937 yards, 24 touchdowns, and only three interceptions.

Behind Wilson, the Seahawks have become the fifth-best offense in the league with 385 yards per game.

However, despite owning the second-best record in the NFC alongside the Saints, the Seahawks are flying under the radar because they’re not even first in their own division. The 10-1 49ers remain atop the NFC West standings, and a final-week meeting between these two rivals could decide who takes the division crown.

Either way, the Seahawks look destined for playoff football. What sort of damage can they do once they get there?

When it comes to the division, the Seahawks and their +175 odds trail the -230 odds of San Francisco to win the NFC West.

So, it’s fair to say that Seattle is unlikely to earn one of the top two seeds within the conference. In that case, they won’t be afforded a first-round bye or home-field advantage as a Wild Card team.

And when it comes to winning the Super Bowl, the Seahawks have to be considered a legitimate threat with their +1200 odds to win it all. Those odds are sixth-best among all NFL teams.

The Patriots lead the way with +250 odds to take home the Lombardi Trophy, and this time the Packers (+1400) are trailing the Seahawks.