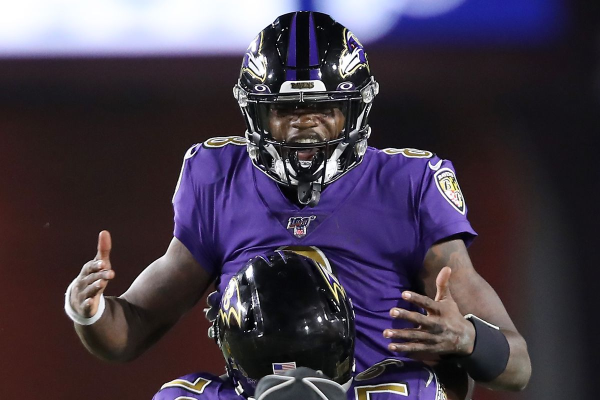 It’s not often that you see a starting NFL quarterback sit out the fourth quarter because his team is blowing out the opponent. That’s basically what happened for Lamar Jackson on his Monday Night Football debut after the Baltimore star led his team to a huge lead over the Los Angeles Rams.

In the end, the Ravens earned a 45-6 victory in Los Angeles to improve to 9-2 on the season and further cement themselves as Super Bowl contenders.

As for Jackson and his MVP candidacy, a virtually flawless first half will only help. Through the first two quarters of play, the 22-year-old went 9 for 9 and led four touchdown drives.

In total, Jackson continued his run of extreme efficiency by completing 15 of his 20 passes for 169 yards and five touchdown passes, which tied a career high. On the ground, the Ravens quarterback showed why he’s truly special, rushing eight times for 95 yards.

It was a dominant performance by the entire Baltimore team, which racked up 480 yards on Aaron Donald and the Rams defense while holding Los Angeles to just 221 yards of their own. Rams quarterback Jared Goff threw for 212 yards with no TDs and two interceptions.

Both Jackson and this Ravens squad look unstoppable, and it may very well end up with an MVP Award and a trip to the Super Bowl.

It was less than a year ago that Lamar Jackson struggled to complete even a single pass for a significant stretch of a playoff game against the Los Angeles Chargers. On Monday night, Jackson tore up the other Los Angeles team with a five-touchdown performance that will likely be referred to in his MVP highlights.

Jackson’s 2019 campaign has looked completely different from his half-season at the helm a year ago. He remains a clear threat with his mobility, but now Jackson does even more damage with his arm.

On the season, Jackson has completed 66.9 percent of his passes for 2,427 yards with 24 touchdowns and only five interceptions. And with a team-high 876 yards and six touchdowns on the ground, Jackson separates himself from every other top-tier quarterback in the league.

Yes, Jackson ranks just 18th in passing yardage, but that’s due in large part to the fact that he often no longer needs to throw the ball in blowout games. This recent contest against the Rams is a perfect example, as Jackson barely even saw the field in the final quarter.

Alongside Russell Wilson, Jackson has the most passing touchdowns in the NFL (24) and has just five total interceptions on the season.

Are Jackson, Ravens Headed for Glory?

The NFL MVP race appears to be boiling down to a two-man contest between Jackson and Wilson. That’s really not much of a surprise, considering both QBs have led their teams to records of 9-2 while the quarterbacks of the 10-1 Patriots and 10-1 49ers aren’t the main reason for their respective teams’ success.

An argument could be made that Seattle needs Wilson more than Baltimore needs Jackson, but there’s no disputing Jackson’s explosiveness as one of the last remaining and most effective dual-threat quarterbacks in the NFL.

Entering this week of play, the trio of Deshaun Watson, Aaron Rodgers, and Patrick Mahomes were all tied for third in the MVP hunt with odds of +1200.

Among the two favorites, Wilson and his +180 odds were trailing the +125 odds of Jackson. That was before Jackson’s five-touchdown day against the Rams in prime time.

And what about Jackson’s Ravens?

Baltimore is 9-2, has defeated the top-ranked Patriots in a 37-20 game, and has won seven games in a row. All of that has earned the Ravens the second-best odds of +375 to win the Super Bowl.

While Baltimore still trails the favorite Patriots and their +275 odds, Jackson and company are ahead of the two NFC favorites, New Orleans and San Francisco, who both own +550 odds.