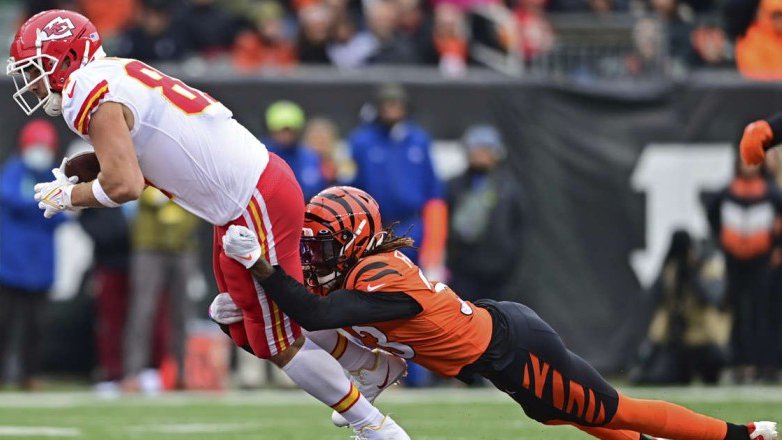 It took overtime and a superhero-like performance by Patrick Mahomes, but the Kansas City Chiefs are making their fourth straight AFC Championship Game appearance. The Chiefs, the second seed in the AFC, outlasted Josh Allen and the third-seeded Buffalo Bills 42-36 in a game that will go down in the NFL history books.

The Chiefs will play for their third straight AFC title against the Cincinnati Bengals, the #4 seed in the AFC. After breaking their three-decade playoff win drought against the Raiders in the wild-card round, the Bengals toppled the AFC’s top seed, the Tennessee Titans, on Saturday.

As is the case with the NFC Championship Game matchup, the two AFC title game participants advanced to conference championship weekend with walk-off wins but did so in drastically different fashion.

With Derrick Henry returning after being sidelined since Halloween, the Titans had every reason to be confident of taking care of the Bengals to advance to the AFC Championship Game.

And more often than not, picking up nine sacks should lead you to a win. But the Bengals held Henry relatively in check and picked off Ryan Tannehill three times, and Joe Burrow brushed off his nine sacks to complete over 75 percent of his passes and throw for almost 350 yards.

Burrow’s 37th and final pass of the game put the Bengals in field goal territory after Logan Wilson picked off Tannehill with 20 seconds left. From there, rookie kicker Evan McPherson coolly drilled a 52-yard field goal to send the Bengals to their first AFC Championship Game since the 1988 season.

The last time the Bengals were in the AFC Championship Game, they defeated the Buffalo Bills to advance to Super Bowl XXIII and a matchup with the San Francisco 49ers.

That same scenario was almost in play, but Mahomes decided to be Mahomes in a season where he hasn’t always been Mahomes. In other words, he was at his best when he needed to be.

In an absolutely unhinged final few minutes of regulation, the Bills and Chiefs traded blows. 24 points were scored in the final 1:54 of regulation. At the two-minute warning, the Chiefs led 26-21. With no time left in regulation, the two teams headed to overtime with the score tied at 36.

In that span of time, Josh Allen and Gabriel Davis hooked up for two touchdowns, sandwiched around a Mahomes-to-Tyreek Hill scoring play. The second score–their record fourth connection of the night–gave the Bills a 36-33 lead with 13 seconds left.

As viewers and the Bills found out, Mahomes only needed ten seconds to put the Chiefs in range for Harrison Butker’s game-tying kick.

The Chiefs won the all-important coin toss, and Mahomes proceeded to leave no chance for Allen to respond.