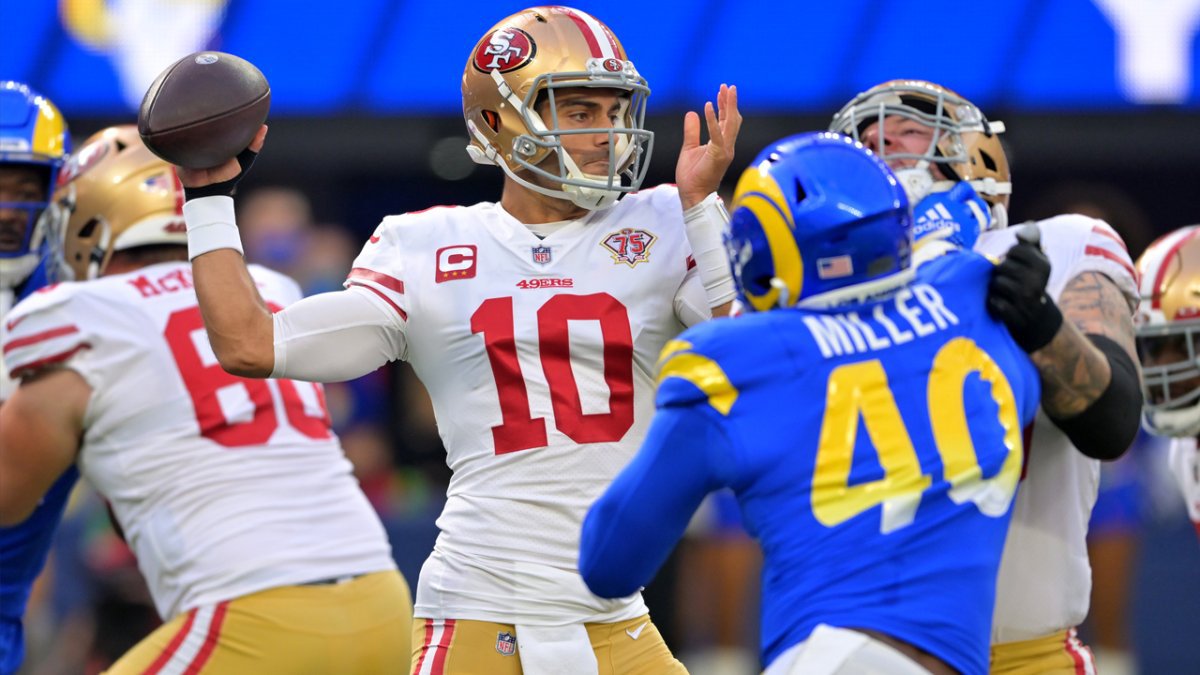 The NFC Championship Game matchup is set, and it will be an all-NFC West affair. On Sunday, the Los Angeles Rams will host the San Francisco 49ers with a trip to the Super Bowl on the line.

To reach the conference title tilt and set up their third matchup of the season, the 49ers and Rams went on the road and knocked out both of the NFC title favorites with last-second field goals.

Three of the seven NFC’s playoff teams came from the NFC West. Based on that achievement and the division’s cumulative record, the NFC West was the best division in the NFL in the regular season. So, it is perhaps only right that the NFC Championship matchup features two NFC West teams.

Both teams booted their way into the conference championship round in similar fashion, but the final outcome and margin of victory are the only similarities their wins share.

49ers Ride Defense and Special Teams to Upset of Packers

The Packers entered this postseason as the favorite to win the Super Bowl, but the 49ers eliminated Aaron Rodgers and Green Bay in the postseason for the fourth time in his career.

Green Bay definitely had their chances to put the game beyond San Francisco’s reach, but they failed to do so. And after blocking a field goal in the first half, the 49ers turned the game on its head late in the fourth, blocking a punt and taking the loose ball into the end zone for a game-tying touchdown.

From there, the defense stopped Rodgers one last time to give Jimmy Garoppolo the ball with three minutes left. It was not a stellar night for Jimmy G and the 49ers offensively, but when it mattered, they picked up the yards they needed, moving down the field to set up Gould’s game-winning kick.

The 49ers needed a last-minute touchdown and an overtime road win over the Rams to just get into the NFL playoffs. Now they head back to SoFi Stadium for the NFC Championship Game, hoping to crush the Rams’ home Super Bowl dreams after road wins over the Cowboys and Packers.

While defense dominated the 49ers-Packers matchup, there was a lot more scoring in Sunday’s Rams-Bucs matchup. But in the end, the Rams prevailed to eliminate the defending Super Bowl champs despite doing their very best to throw away a 27-3 lead.

It was no surprise that Tom Brady and the Bucs rallied, as Brady has done many times without and without extra fortune. But the Rams were far too generous, with four fumbles (three in the second half) keeping the Bucs in it. Two of the fumbles set up touchdowns, enabling Tampa to tie it with 42 seconds left.

But contrary to the script that has played out many, many times before, Matthew Stafford and the Rams had the last word, not Brady. Two completions to Cooper Kupp set up Matt Gay’s game-winning kick with no time left, giving the Rams a 30-27 win.

In trading for Stafford, the Rams gambled that someone who hadn’t been a part of many big games in his career could be the guy to win the biggest games for them. And he did just that, outplaying Brady on the road and making two big throws to set up the winning kick.

Now, the Rams must make the third time be the charm against the 49ers, who swept them in the regular season. If the Rams do win, they will get to play the biggest game of them all at their home stadium against the winner of the Bengals-Chiefs AFC Championship Game matchup.

With the matchup now set, NFC Championship Game odds have been released. Let’s take a look at the early odds from BetMGM.

The first NFC title game was in the 1970 NFL season, following the AFL-NFL merger. That season, the Dallas Cowboys defeated the San Francisco 49ers to advance to the Super Bowl.

In fact, that matchup would occur again the following season as well. Since then, it has taken place four more times, making it the most common NFC Championship Game matchup.

In the most recent NFC Championship Game, the Bucs defeated the Packers 31-26 at Lambeau Field in Green Bay. With the win, the Bucs became the first team in the Super Bowl era to play in a Super Bowl at their home stadium.

It has been a miserable month for the Seattle Mariners, and things are unlikely to get any better tonight as they welcome AL Cy Young Award favorite Justin Verlander and the Houston Astros to T-Mobile Park. After just missing out on the MLB playoffs last season, the Mariners entered this season with hopes of finally END_OF_DOCUMENT_TOKEN_TO_BE_REPLACED