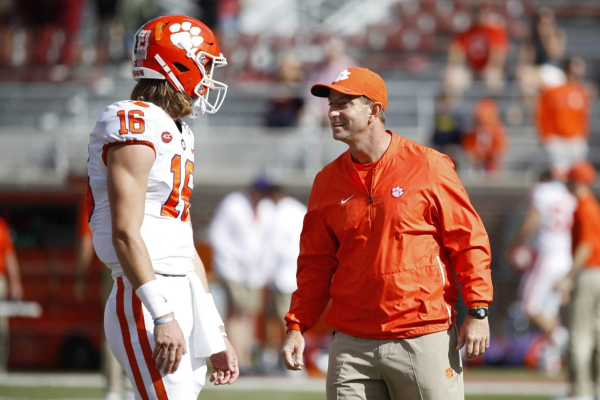 College football begins week one on Thursday as the Georgia Tech Yellow Jackets travel to Memorial Stadium to take on the Clemson Tigers. For Georgia Tech, they will be tested taking on the defending national champion Tigers, especially as they play their first game under coach Geoff Collins. Kickoff for this one is scheduled for 8:00 pm ET.

For Georgia Tech fans, they are hoping to build off of last season, where they went 7-6, including 5-3 in the ACC. When it was all said and done, they played against Minnesota in the Quick Lane Bowl; however, they lost that bowl game 34-10.

Under Collins, who replaces former coach Paul Johnson, they will look to a more traditional pro-style offense. Unfortunately for the Yellow Jackets, though, they will be testing out the new offense against one of the best defenses in the country.

To say that Clemson had a good season last year would be a bit of an understatement. They went 15-0 on the season, including 8-0 in the ACC. Additionally, they won the ACC Championship Game 42-10 over Pittsburgh, the Cotton Bowl over Notre Dame 30-3, and finally the National Championship Game over Alabama 44-16.

With many of their star players returning, they are poised to take another run at the national championship and, going into the season, are the hands-down favorites to do so.

The point spread for this one currently sits with the Clemson Tigers being a whopping 37-point favorite playing at home. The over/under on total points scored is set at 60.5 points.

While it is a new season with new expectations, the fact that Clemson is returning its core of starters on both sides of the ball may mean that Georgia Tech is in for a long night.

It is hard to put a lot of stock into the Yellow Jackets’ chances in this one. Collins is having to transition his roster to fit his scheme. For instance, given that Collins wants to run a more conventional pro-style offense, tight ends are needed. That seems to be an obvious statement, except for the fact that last year’s Georgia Tech team really didn’t have any in their spread offense.

Not only will the transition affect the skilled positions, but the offensive line of the Yellow Jackets will be a major question mark as they go from the option to a pro-style offense. It is not saying that their coaching staff can’t make the adjustments, but if they don’t, the Clemson defense will expose them.

Clemson’s defense will be a wrecking machine this year. The scary part, though, is that their offense might be even better. Returning to the Tigers this year will be standout quarterback Trevor Lawrence. Last season, as a freshman, Lawrence went 259 for 397 for 3,280 yards, 30 touchdowns, and just four interceptions. He also rushed 60 times for 177 yards and a touchdown. While those numbers are outstanding, I anticipate he will be even better this year.

The other remarkable player returning is running back Travis Etienne. Last year, the junior running back rushed 204 times for 1,658 yards and 24 touchdowns. He also had 12 receptions for 78 yards and an additional two touchdowns. With either one of them on the offensive side, they are great; with both of them, watch out!

Tigers Win, But Can They Cover?

There is not a shadow of a doubt who the dominant team is in this matchup, and that is Clemson. Not only are the Tigers better in just about every facet of the game, but they have an established system, as opposed to the first-year system being implemented at Georgia Tech. The Yellow Jackets are going to go through growing pains this year under their new head coach, and it won’t be pretty at times.

Still, a 37-point spread, which equates to basically needing five touchdowns and a field goal advantage, is ridiculously hard regardless of the opponent. My concern is that weird things tend to happen in week one, and, if the Tigers can get out to a comfortable lead, I am not sure that you see Lawrence or Etienne the entire game. I certainly wouldn’t blame you if you took Clemson to cover, but for my money, I feel more comfortable taking the Yellow Jackets and the 37 points.