Let the Trash Talk Begin: Alabama Says It’s Better Than Clemson. Who Has The Edge? 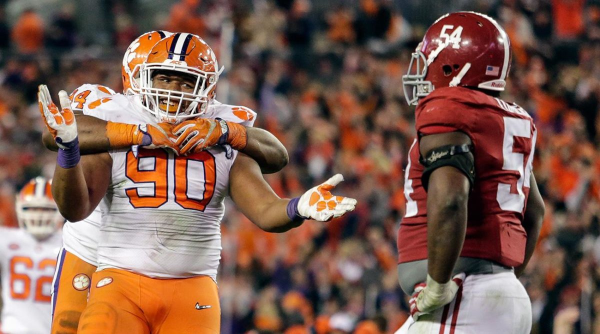 Alabama linebacker says Alabama is better than Clemson, and the world goes crazy. Is he wrong?

Trash talk in a hyper-testosterone world like college football is omnipresent. Inescapable and abundant. There is absolutely no way you’re not going to hear trash talk, and this instance is no different.

Yes, and here’s why.

Results Speak for Themselves

It’s very hard to say that you’re better than a team that absolutely smoked you on the biggest stage in college football, particularly when you had weeks to prepare. The Clemson Tigers not only beat the Crimson Tide in the National Championship Game, but they did it in epic fashion. Hoisting the College Football Playoff title for the second time against the Tide in the Dabo-Saban era was a pretty decisive victory for the Tigers, and it cemented their greatness on the game’s biggest stage.

That said, it’s very difficult for the Crimson Tide — one player or the whole team — to say that they are outright better than them with a straight face. That said, if he were to say anything else but that, it would call his loyalty and his confidence into question. While many people are taking those words as fighting words (they’re not), the truth is, every player, even if they were a MAC team, is going to say their team is the best team, whether they really believe it or not.

But hubris or motivational braggadocio aside, the truth is, the results speak for themselves. It’s important to realize that the Crimson Tide has always been a big-time football team, but in recent seasons against the Clemson Tigers, the drive to really show how great they are is only enhanced.

In truth, just because one player claims his team better, it doesn’t necessarily mean that the other team has to be better. Both teams could be equally skilled, and frankly, it just seems that both teams are essentially too close to call if you had to make a line. In the end, it’s important to realize that if a game goes to the final stage, like a championship game, it’s going to be pretty obvious who is going to have an edge. The Tigers.

That said, in reality, you could technically say that both quarterbacks are pretty evenly matched, and both quarterbacks have performed masterfully on the biggest stage in college football. Because of that, it’s hard to argue otherwise, and until another party is able to make a better point, the truth is that Tua and Trevor are both freakishly great players with unlimited passer potential. Either one could go on to have a great professional career, but Lawrence is definitely the classic stand-in-the-pocket QB, making him especially attractive to potential NFL suitors.

In the long run, if you’re going to bet on a potential elite pro QB against anyone, Lawrence is hard to pick against. That said, there is going to be a lot more going on that will determine which team is better, but at the end of the day, these teams, assuming both are entirely healthy, are going to be a complete wash towards the end of the season. That means that bettors and fans alike have to be aware that these players are going to be very important going forward, and until we actually see the teams play, trash talk is just that: talk and trash.

Either way, both teams are fair to argue why they’re better.