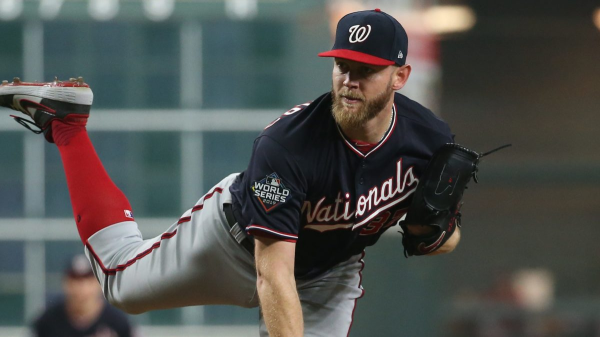 It has been quite an interesting World Series thus far. Through five games, home-field advantage has meant absolutely nothing. In the first two games, the Houston Astros looked like a shell of themselves while the Washington Nationals came into Houston and took the first two games seemingly easily.

With many thinking that the Astros would fold, all they did was take a day off, go into Washington and sweep the three games on the road. Now, as we enter Game 6 on Tuesday night, the Washington Nationals will be back in Minute Maid Park to see if they can continue the trend of the road team winning.

If they are going to do it, they certainly have the right person on the mound. The Nationals will send righty Stephen Strasburg (18-6, 3.32 ERA) to the mound to square off with the Astros’ Justin Verlander (21-6, 2.58 ERA). First pitch for this one is scheduled for 8:07 pm ET.

The moneyline for this matchup features the Washington Nationals at +155 and the Houston Astros at -175.

Trying To Force A Game 7

After coming out and manhandling the Astros for the first two games, the Nationals went back to their home crowd pumped and ready to try to win a World Series at home. All they proceeded to do, though, was struggle for three games to the tune of a combined three runs. That’s right, one in game 3, one in game 4, and one in game 5.

To beat the Astros on the road, the offense has to produce. Juan Soto has been one of the Nationals’ most consistent performers in the World Series to this point. In 18 at-bats, he has hit .333/.455/.778 with two home runs, five runs batted in and four runs scored; however, he struggled a bit over the last three games.

One player who has really impressed, if nothing else, due to his lengthy and pesky at-bats, has been Adam Eaton. This series, Eaton is hitting .316/.381/.474 with a home run, three runs batted in and two runs scored.

This postseason, Strasburg is 4-0 in five games (four starts) with a 1.93 ERA, 0.96 WHIP, and opponents are hitting .234 against him. In 28 innings, he has allowed 25 hits, six earned runs, three home runs and has struck out 40 batters versus just two walks. In Game 2 of the World Series, he went six innings, allowing seven hits and two earned runs, and struck out seven while walking one. The Nationals will hope for a similar outing Tuesday.

When the Astros left for Washington, D.C., they felt left for dead, having blown two games at home and against seemingly insurmountable odds. After three straight victories, they now feel on top of the world, looking to close out their second championship in the last three years.

Like the regular season, Verlander has been plagued by the long ball, as he has given up six home runs this postseason. If there was ever a time to snap the misfortune and show what has made him an ace and a Cy Young contender, it would be Tuesday night.

Offensively, the Astros finally have put some things together. One player in particular who has found a nice groove at the plate after a massive slump has been Yordan Alvarez. He is hitting .545/.615/.818 in 11 at-bats this World Series, with his first home run of the postseason last game.

Aside from Alvarez, Michael Brantley (.400/.478/.400), Robinson Chirinos (.364/.364/.1.000 with two home runs), and Jose Altuve (.360/.360/.480 with four runs scored) have all started to get it going. Even Alex Bregman, who has also been mired in an extensive slump, got into the action with a grand slam and five runs batted in during Game 4. If the Astros can regain their form at the plate and Verlander can pitch to his ability, this might be a tough game for the Nationals to take.

From the beginning of the series, I have said that I would bet the favorable moneyline, and in this one, that means betting the Nationals. Granted, they looked horrific in our nation’s capital for three games, but they could reset after the travel day just like the Astros did after Game 2.

In reality, the Astros have all of the momentum and could easily finish it off in Game 6, but Verlander has to be able to perform. I know that sounds odd for the future Hall-of-Famer, but he is 0-5 in World Series starts in his career with a 5.73 ERA. Granted, he is certainly capable of putting together a dominant performance at home, but so is Strasburg. There is a small part of me that thinks Houston finishes it, but the smart bet is on the Nationals at +155.