Weekend In Washington Puts Houston One Win Away From Title 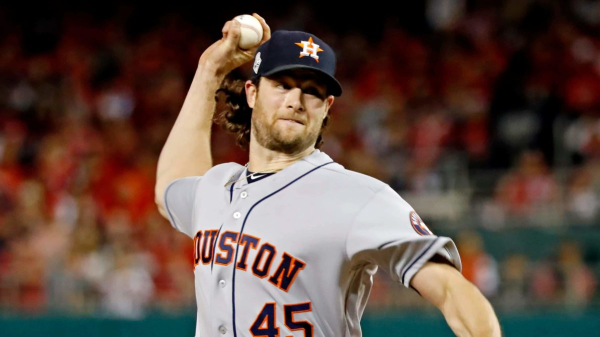 After the Houston Astros tied the World Series at two games apiece on Saturday night, we were all set for a Game 1 rematch between Houston ace Gerrit Cole and Washington ace Max Scherzer in Game 5. But when neck spasms kept Scherzer from being able to play, Cole took over in a lopsided pitching matchup on Sunday night.

With a seven-inning gem, Cole led the Astros to a 7-1 victory that puts Houston one win away from a World Series title after winning three straight in Washington. Through five games, the home team is yet to win a game.

The opening matchup of the 2019 World Series handed Cole his first loss since May 23. With his sights set on vengeance, Cole struck out nine batters while allowing only a single run on three hits over seven innings in Game 5.

After Scherzer was unable to go, the Nationals sent out Joe Ross to start. Lasting five innings, Ross was outmatched in the contest. Notching one strikeout, Ross allowed four earned runs on five hits.

Six of the runs batted in came from the bats of George Springer, Carlos Correa, and Yordan Alvarez.

Now, after going down 2-0 to Washington to kick off the Fall Classic, the Astros have ripped off three straight wins and will head home with another World Series title in their sights.

After losing three straight and heading to Houston, the Nationals can take solace in the fact that the road team has won every single game of the series thus far. If Washington is going to get the best of an Astros team that won 107 regular-season games, it will have to win two in a row in Houston.

With Scherzer’s status uncertain, the good news for the Nationals is that they’ll have Stephen Strasburg (18-6, 3.32 ERA) on the mound Tuesday night. In Game 2, Strasburg settled in after allowing two runs in the first inning to strike out seven on his way to six innings of two-run ball.

The Nationals right-hander has been great in the playoffs. In addition to posting a 1.93 ERA this October, Strasburg can boast a career postseason ERA of 1.34.

The Astros are scheduled to counter with right-hander Justin Verlander (21-6, 2.58 ERA). Game 2 marked some baseball history for Verlander, who became the first pitcher to lose his first five World Series decisions.

In his career, Verlander is 0-5 with a 5.73 ERA in six World Series starts. The Houston co-ace was unable to record an out in the seventh inning of Game 2 and ended up allowing four earned runs on seven hits.

Late October is the time for big players to step up, so Washington will be counting on Anthony Rendon, Howie Kendrick, and Juan Soto. While Rendon is batting .308 with nine RBI, Kendrick has batted in 10 runs, and Soto leads the team with four homers and 12 RBI this postseason.

For the Astros, Jose Altuve, Alex Bregman, and Yuli Gurriel are most likely to leave a mark. Altuve leads the team with his .353 average and five home runs, Bregman has batted in 11 runs, and Gurriel leads the club with 12 postseason RBI.

The Astros opened the series as the biggest favorite in the last 12 years, with odds of -235 to win it all. After two straight wins, the Nationals pulled the odds in their own favor.

After Houston has rallied back to a 3-2 series lead, where do we stand?

For Game 6 specifically, the Astros are -177 favorites to win the contest with Verlander starting on the mound. The Nationals currently sit at +152 dogs, but it wouldn’t shock anyone if Strasburg threw a gem on the way to a Washington victory.

However, it would be a shock to see the Nationals win the World Series based on the current odds. At -850, the Astros are now huge favorites to win one of the final two games of the series and claim another title.