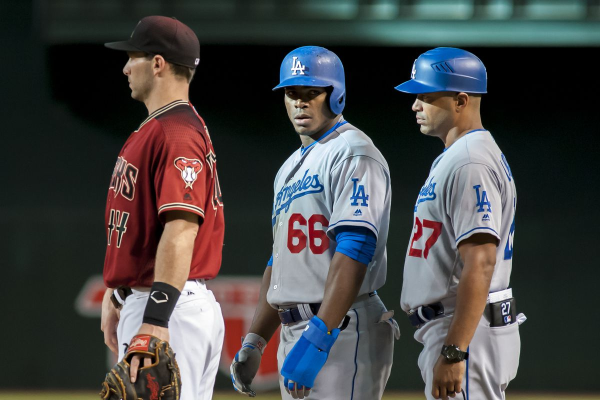 If they weren’t already feeling it, the Los Angeles Dodgers are certainly feeling the pressure now. After dropping the first two games of the series in Boston, the Dodgers are going to have to claw their way back into the series and that starts with the game Friday night when the Boston Red Sox (2-0) travel to Dodger Stadium to take on the Dodgers (0-2). For the Red Sox, they will turn to righty Rick Porcello (17-7, 4.28 ERA in the regular season) for this one. Opposing him will be Walker Buehler (8-5, 2.62 ERA during regular season). First pitch is scheduled for 8:09 pm ET.

The moneyline for Friday’s game three is set at the Boston Red Sox +135 and the Los Angeles Dodgers -160. The over/under on runs scored is set at 7.5.

Boston Having To Navigate Injuries And National League

One of the biggest storylines for this game is going to be J.D. Martinez. The All-Star designated hitter, who might be a frontrunner for AL MVP alongside teammate Mookie Betts, will present a bit of a conundrum for first-year manager Alex Cora. First, Martinez suffered an ankle sprain after an awkward slide in game one. If he were able to be the designated hitter, it is likely something that he would be able to play through.

Without it, though, the Red Sox would have to get creative, possibly moving Mookie Betts into second base to allow Martinez to play in the outfield. Once again, that might have been a realistic solution, but with the injury to Martinez now, it will be interesting to see how Cora plays this Friday night.

On the mound for the Red Sox will be Rick Porcello. Over the course of four games, both as a starter and a reliever, Porcello has thrown 10.2 innings of 4.22 ERA ball this postseason. In that time he has a 1.22 WHIP, opponents are hitting .279 against him and he has 6 strikeouts versus 1 walk. He has also allowed 2 home runs and 5 earned runs in that time. His last start, an 8-6 win in the ALCS, he went 4 innings, allowing 4 earned runs and striking out 3. Long story short, it might be a night where the Red Sox bullpen gets a lot of work.

Dodgers Hope To Fight Back Into Series

If the Dodgers have a chance at winning the World Series, they know they need to win game three. To try to do so, they will turn to young hurler Walker Buehler. During the postseason, he is 0-1 with a 5.40 ERA over the course of 3 starts. In 16.2 innings pitched, he has allowed a .222 opposing batting average, 1.08 WHIP, has struck out 22 and walked only 4.

One thing that has hurt him is the long ball, as he has allowed 3 home runs and 10 earned runs thus far this postseason. While those numbers look brutal on the surface, his last outing showed what he is capable of. In a 5-1 win to clinch the World Series berth, Buehler went 4.2 innings, allowing just 1 earned run and striking out 7. The Dodgers will need another big game from him Friday night.

The Dodgers are also hoping to get their bats rolling Friday. Through the first two games, Cody Bellinger, Brian Dozier, Matt Kemp, Yasiel Puig, Joc Pederson, Chris Taylor and YasmaniGrandal are a combined 2 for 29. Against a vaunted Red Sox lineup, that just isn’t going to get it done. Still, some of their stars have performed. Justin Turner is 3 for 9 and MannyMachado is 2 for 7 with 3 runs batted in. Still, if they hope to take on back, the bats are going to have to wake up against the Red Sox pitching.

Dodgers Get One Back

At the beginning of the World Series, I predicted that the Red Sox would win in five and I am still holding to that. With that in mind, this is the one that I think the Dodgers are able to win. Walker Buehler has been fantastic this season and has shown flashes this postseason for the Dodgers and a gimpy JD Martinez could take (or at least hamper) one of the big bats in the Red Sox dynamic lineup. Knowing that they don’t want to go down 0-2 and playing in front of their home fans, I think the Dodgers will come out and take this one against the righty Porcello. For my money, I am taking the Dodgers at -160.