Verlander Throws No-Hitter; Is He A Lock for 2019 AL Cy Young? 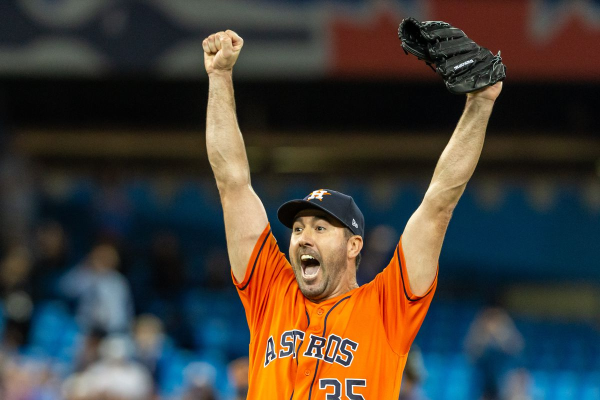 A 120-pitch effort in Toronto became another line on the resume of future Hall of Famer Justin Verlander as he earned the third no-hitter of his career on Sunday. Now, only Sandy Koufax (4) and Nolan Ryan (7) have more no-nos than the Astros right-hander.

Verlander faced 28 batters and struck out 14, allowing only a single walk to Cavan Biggio, the second batter Verlander faced all day. With the win, Verlander now owns a record of 17-5 and an ERA of 2.56.

Perhaps the most interesting part of Verlander’s third no-hitter is the fact that it’s his second at the Rogers Centre in Toronto. With three no-hitters pitched on the road, only Nolan Ryan has more than Verlander’s two away from home.

At 36 years of age, Verlander also became the oldest pitcher in the majors to throw a no-no since Randy Johnson 15 years ago.

While the long-term goal of one day reaching Cooperstown as a Hall of Fame baseball player looks done and dusted, our focus shifts to the shorter-term goal of this year’s AL Cy Young award. Is Verlander already a lock for the accolade?

If Verlander wins his second Cy Young Award this year, he’ll join a relatively small group of just 19 pitchers to win more than one in MLB history. So far, that outcome looks more likely than not.

As far as wins go, Verlander’s 17 put him in a tie for the most in the majors with Domingo German of the Yankees. On the back of his 14-strikeout effort Sunday, Verlander ranks second in strikeouts (257), behind only teammate Gerrit Cole (266).

With an ERA of 2.56, Verlander can also boast the best in the American League in that category. Behind only Mike Minor of the Rangers, Verlander ranks second among pitchers in wins above replacement with 6.7.

No matter which direction you look on the pitching leaderboards, Verlander is there, which is why he’s the favorite to win the AL Cy Young award. Verlander is a frontrunner, but is he already a lock?

Competition for the AL Cy Young

As a frontrunner for the AL Cy Young award before an incredible no-hit performance against the Blue Jays, Verlander is now the odds-on favorite. If anyone is going to keep Verlander from winning his second Cy Young, it’s likely going to be his own teammate in Cole.

Morton is a longshot compared to both Verlander and Cole, who were recently neck and neck with +150 odds for Verlander and +180 odds for Cole. That virtual tie wasn’t much of a surprise considering Cole’s 15-5 record, 2.81 ERA, and 266 strikeouts.

However, it appears Verlander’s no-no has put him over the top. Now with -300 odds compared to Cole’s +200, Verlander is the clear favorite to win the award.

So, is Verlander a lock to win the AL Cy Young? Barring a total collapse in September, it’s certainly Verlander’s to lose. When the season comes to a close, expect Verlander to add his name to the 19 others in MLB history to win multiple Cy Young awards.