Rangers vs. Astros (August 9): Expect few runs in Houston with Perez, Urquidy on the hill? 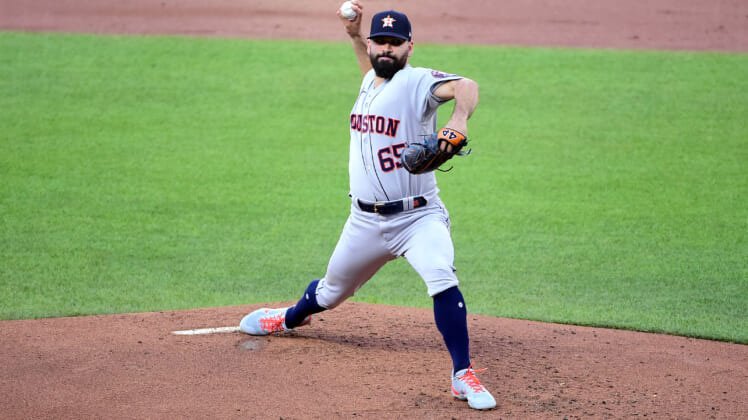 After back-to-back losing weeks, this week should be a positive one for the Houston Astros with two series at home against AL West rivals. First up is a three-game set against the Texas Rangers, which starts tonight at Minute Maid Park.

The Astros opened the second half with five straight wins have gone just 6-8 since. Last week, they lost two of three at home against the Boston Red Sox then only managed a split from their four-game series at Cleveland after winning the first two games.

Tonight’s opener against their Lone Star State rivals is certainly no guaranteed win with All-Star pitcher Martin Perez on the mound for Texas. But Jose Urquidy has had the Rangers’ number, and the AL West leaders are firm favorites for good reason.

Game odds are via FanDuel. Odds from other top legal online sports betting sites may also be mentioned in this article.

Are We in for a Pitchers’ Duel at Minute Maid?

In terms of current form, there aren’t many MLB pitchers who can match the two starters for tonight’s matchup in Houston.

Perez’s breakout season hit a little speed bump before the All-Star break, but he is definitely back on track now.

In his last four starts, he is 2-0 with a 1.44 ERA. In 25 innings, he has allowed four runs and 15 hits and struck out 30. He has issued 12 walks in this stretch after allowing only 26 in his first 17 starts, but when you don’t give up many hits, that minimizes the potential damage of free passes.

Perez has been especially good on the road and in night games, so the Astros will have their work cut out for them here.

Urquidy’s numbers for the season don’t quite compare to Perez’s, but he is on an extended run of excellence.

Urquidy loves pitching against the Rangers, judging by his career numbers against them.

The Rangers are 10-0 in Perez’s away starts, which includes a 2-0 win in Houston on May 20 in which he tossed a complete game shutout.

So, betting against him here is certainly no small thing. But Urquidy’s form matches up well with Perez’s, and as good as the 31-year-old lefty has been, beating the Astros twice at their place in one season is a tall order.

The best overall play, however, is the under. In Urquidy’s nine home starts, there have been seven or fewer combined runs seven times, including each of the last three. Also, both of Perez’s starts against the Astros this season have been low-scoring games.

FanDuel has the total at 7.5, but whether it moves to 8 there or you must look elsewhere, it’s nice to have that extra security instead of being doomed to a loss if someone pushes across an eighth run late.