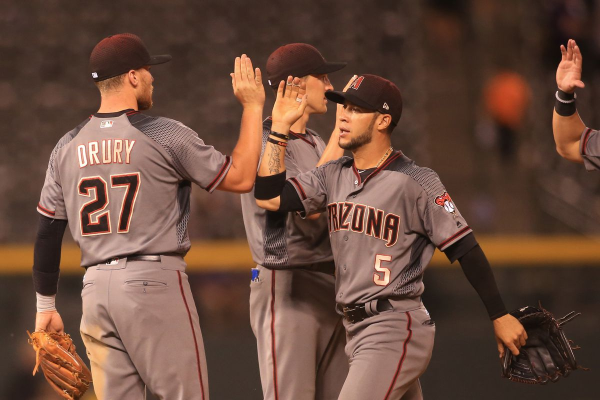 It doesn’t get much better than when you have two legitimate aces on the mound squaring off with one another. On Thursday, that is exactly what will happen when the San Francisco Giants (55-54) travel to Chase Field to take on the Arizona Diamondbacks (60-49). The Giants will be sending out Madison Bumgarner (3-4, 3.06 ERA) to face off with the Diamondbacks Zack Greinke (12-5, 2.96 ERA). Currently 5 games back in the division, the Giants are trying to make up ground in a brutally tough NL West. For the Diamondbacks, they would like to create some separation from not only the Giants, but the Rockies and Dodgers, who both sit within a game. The first of a four game set will start between the Giants and Diamondbacks on Thursday, with a 9:40 pm ET first pitch.

The moneyline for Thursday’s game is set at the San Francisco Giants +139 and the Arizona Diamondbacks –149. The over/under for runs scored is set at 7.5.

Giants Try To Hang On While Dealing With Injuries

The Giants took another blow to their team when it was decided that righty Johnny Cueto would be undergoing Tommy John surgery, a procedure that will end this season and likely keep him out for much of next. If they have any chance at competing, this is where players like MadisonBumgarner are going to have to step up. On the season, Bumgarner (who has also spent time on the disabled list) is 3-4 with a 3.06 ERA, 1.20 WHIP and opponents are hitting .217 against him. In 61.2 innings, he has 51 strikeouts and 24 walks. In his last start, a 3-1 loss to the Brewers, he went 8 innings, giving up 3 earned runs and striking out 5.

The Diamondbacks know they are going to have their work cut out for them if they hope to win their division. With that in mind, they did a nice job prior to the trade deadline of acquiring assets to help them in the stretch run. They acquired outfielder Jon Jay, 3rd baseman Eduardo Escobar and solidified their bullpen by adding Jake Diekman, Brad Ziegler and Matt Andriese.

Even with the acquisitions, they still need their stars to step up and ZackGreinke has done exactly that lately. He has won each of his last three starts. In that time he went a combined 22.2 innings, striking out 26 and allowing only 2 earned runs. He will look to keep it rolling against the Giants on Thursday.

One player to watch offensively for the Diamondbacks is PaulGoldschmidt. In his career against Bumgarner, he is hitting .345 with 2 home runs and 8 runs batted in across 55 at bats. On the season Goldschmidt is hitting .277/.384/.520 with a .904 OPS. He has 23 home runs, 59 runs batted in and has scored 68 runs. Another name to watch is A.J. Pollock. While he is only hitting .245 against him in 53 at bats, Pollock has also gotten to Bumgarner for 2 home runs.

As great as MadisonBumgarner has been in his career, all signs point to the Diamondbacks in this one. Zack Greinke has been pitching consistently superb lately and there is a better track record for the Diamondbacks hitters against Bumgarner than the other way around. Throw on top of that the Diamondbacks have been rolling, winning 7 of their last 10 and I will take my chances putting my money on Arizona. Take the Diamondbacks -149.